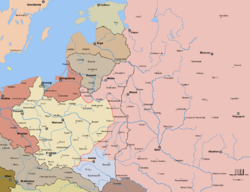 By 1921, when Bazhanov was 21, the territory of modern-day Ukraine
Ukraine
Ukraine is a country in Eastern Europe. It has an area of 603,628 km², making it the second largest contiguous country on the European continent, after Russia...
was divided between Soviet Ukraine (which would become a constituent republic of the Soviet Union
Soviet Union
The Soviet Union , officially the Union of Soviet Socialist Republics , was a constitutionally socialist state that existed in Eurasia between 1922 and 1991....
) and Poland
Second Polish Republic
The Second Polish Republic, Second Commonwealth of Poland or interwar Poland refers to Poland between the two world wars; a period in Polish history in which Poland was restored as an independent state. Officially known as the Republic of Poland or the Commonwealth of Poland , the Polish state was...
, with small regions belonging to Czechoslovakia
Czechoslovakia
Czechoslovakia or Czecho-Slovakia was a sovereign state in Central Europe which existed from October 1918, when it declared its independence from the Austro-Hungarian Empire, until 1992...
and Romania
Kingdom of Romania
The Kingdom of Romania was the Romanian state based on a form of parliamentary monarchy between 13 March 1881 and 30 December 1947, specified by the first three Constitutions of Romania...
.

In 1919, Bazhanov joined the local Communist Party organization and was soon afterward elected district secretary. Quickly rising through local party posts in Ukraine, he went to Moscow to study engineering in November 1920. In 1922 he applied for a technical position with the Central Committee apparatus and was accepted by Ksenofontoff.

As Stalin's assistant, Bazhanov had become Secretary of the Politburo and was responsible for taking notes of the meetings. On October 26, 1923, Bazhanov took notes at a Central Committee meeting attended by Vladimir Lenin
Vladimir Lenin
Vladimir Ilyich Lenin was a Russian Marxist revolutionary and communist politician who led the October Revolution of 1917. As leader of the Bolsheviks, he headed the Soviet state during its initial years , as it fought to establish control of Russia in the Russian Civil War and worked to create a...
, Joseph Stalin
Joseph Stalin
Joseph Vissarionovich Stalin was the Premier of the Soviet Union from 6 May 1941 to 5 March 1953. He was among the Bolshevik revolutionaries who brought about the October Revolution and had held the position of first General Secretary of the Communist Party of the Soviet Union's Central Committee...
, and Leon Trotsky
Leon Trotsky
Leon Trotsky , born Lev Davidovich Bronshtein, was a Russian Marxist revolutionary and theorist, Soviet politician, and the founder and first leader of the Red Army....
at a time when Lenin was very ill and just three months before his death. During the meeting, Lenin offered to appoint Trotsky as his "heir." According to Bazhanov's notes, Trotsky turned down the job of deputy leader because he was Jewish, reasoning "We should not give our enemies the opportunity to say that our country was being ruled by a Jew. ... It would be far better if there was not a single Jew in the first Soviet revolutionary government." After Lenin's death in January 1924, Stalin, Kamenev
Lev Kamenev
Lev Borisovich Kamenev , born Rozenfeld , was a Bolshevik revolutionary and a prominent Soviet politician. He was briefly head of state of the new republic in 1917, and from 1923-24 the acting Premier in the last year of Lenin's life....
, and Zinoviev
Grigory Zinoviev
Grigory Yevseevich Zinoviev , born Ovsei-Gershon Aronovich Radomyslsky Apfelbaum , was a Bolshevik revolutionary and a Soviet Communist politician...
together governed the party, placing themselves ideologically
Ideology
An ideology is a set of ideas that constitutes one's goals, expectations, and actions. An ideology can be thought of as a comprehensive vision, as a way of looking at things , as in common sense and several philosophical tendencies , or a set of ideas proposed by the dominant class of a society to...
between Trotsky (on the left wing of the party) and Nikolay Bukharin (on the right). Trotsky eventually was forced into exile in Mexico, where he was assassinated in 1940 by a Stalinist agent. Bazhanov's notes were discovered in early 1990 by Soviet historian Victor Danilov and used in support of an answer to one of the mysteries of the Bolshevik Revolution: why Leon Trotsky refused Vladimir Lenin's offer to appoint him as heir.

During the years 1923 - 1924, Bazhanov attended all the meetings of the politburo and worked in Stalin's secretariat
Secretariat of the CPSU Central Committee
The Secretariat of the CPSU Central Committee was a key body within the Communist Party of the Soviet Union and was responsible for the central administration of the party as opposed to drafting government policy which was usually handled by the Politburo...
and for the politburo to the end of 1925. In the early 1920s, Bazhanov's role in Stalin's inner circle was smaller than that of the "group of five" composed of Yakov Brezanovsky, Ivan Tovstukha, Amayak Nazaretyan, Georgy Kanner, and Lev Mekhlis
Lev Mekhlis
Lev Zakharovich Mekhlis was a Jewish-Soviet statesman and party figure.-Career:He however served incompetently as a party commissar at the front during World War II, among his mistakes being failures, in conjunction with General Dmitri Kozlov, which meant the Crimean Front was defeated and had to...
. Bazhanov's influence with Stalin increased after Brezanovsky and Nazaretyan left the secretariat. Bazhanov was able to hold on to different positions at the Politburo from 1925 to 1928.

Dissatisfied with contributing to Communism, Bazhanov crossed the border to Iran
Iran
Iran , officially the Islamic Republic of Iran , is a country in Southern and Western Asia. The name "Iran" has been in use natively since the Sassanian era and came into use internationally in 1935, before which the country was known to the Western world as Persia...
to defect from the Soviet Union on January 1, 1928, the same year that the first of Stalin's Five-Year Plans for the National Economy of the Soviet Union was accepted. Bazhanov would be the only assistant at Stalin's secretariat who subsequently turned against the Soviet regime. Bazhanov subsequently was granted asylum
Right of asylum
Right of asylum is an ancient juridical notion, under which a person persecuted for political opinions or religious beliefs in his or her own country may be protected by another sovereign authority, a foreign country, or church sanctuaries...
in France.

Through his defection, Bazhanov became an enemy of Stalin. Bazhanov was pursued by a manhunt led by Georges Agabekov
Georges Agabekov
Georges Agabekov , was a Soviet Red Army soldier, Chekist, OGPU Agent, Chief of OGPU Eastern Section...
, who was the chief Soviet spy in the Near East at that time until Agabekov himself defected in France in June 1930. In October 1929, Stalin ordered assassin Yakov Blumkin
Yakov Blumkin
Yakov Grigoryevich Blumkin was a Left Socialist-Revolutionary, assassin, Bolshevik, Cheka agent, State Political Directorate spy, and adventurer, executed as Trotskyist.-Early life :...
to travel through Paris
Paris
Paris is the capital and largest city in France, situated on the river Seine, in northern France, at the heart of the Île-de-France region...
to the island of Prinkipo
Büyükada
Büyükada is the largest of the nine so-called Princes' Islands in the Sea of Marmara, near Istanbul, with an area of about two square miles...
in Istanbul
Istanbul
Istanbul , historically known as Byzantium and Constantinople , is the largest city of Turkey. Istanbul metropolitan province had 13.26 million people living in it as of December, 2010, which is 18% of Turkey's population and the 3rd largest metropolitan area in Europe after London and...
, Turkey
Turkey
Turkey , known officially as the Republic of Turkey , is a Eurasian country located in Western Asia and in East Thrace in Southeastern Europe...
to assassinate Russian October Revolution leader Leon Trotsky
Leon Trotsky
Leon Trotsky , born Lev Davidovich Bronshtein, was a Russian Marxist revolutionary and theorist, Soviet politician, and the founder and first leader of the Red Army....
. While in Paris, Blumkin was to assassinate Bazhanov. With the help of his cousin and GPU
State Political Directorate
The State Political Directorate was the secret police of the Russian Soviet Federative Socialist Republic and the Soviet Union from 1922 until 1934...
informer Arkady Maximov, Blumkin staged a car accident. However, the car accident failed to kill Bazhanov. Bazhanov fought in a formation of Russian emigres with the Finnish Army in the defence against the Soviet war to conquer
Winter War
The Winter War was a military conflict between the Soviet Union and Finland. It began with a Soviet offensive on 30 November 1939 – three months after the start of World War II and the Soviet invasion of Poland – and ended on 13 March 1940 with the Moscow Peace Treaty...
that country.

In the conclusion of the 1978 book The Storm Petrels: The Flight of the First Soviet Defectors, Bazhanov remarked on "the twisted path of Marxism":

"You know, as I do, that our civilization stands on the edge of an abyss... Those who seek to destroy it put forth an ideal. This ideal [of communism] has been proven false by the experience of the last sixty years ... the problem of bringing freedom back to Russia is not insoluble ... the youth of Russia no longer believe in the system, despite the fact that they have known nothing else. If the West [develops its] confidence and unity, [it] can win the battle for our civilization and set humanity on the true path to progress, not the twisted path of Marxism."

Bazhanov published an edition of his memoirs in France in 1980, entitled Memoirs of a Secretary of Stalin's. Bazhanov died in France in January 1983.


Retracted parts of the first edition

The 1930 edition of Bazhanov's memoir had him becoming an anti-Communist well before he came to Moscow and took up positions with the Central Committee. In later editions, Bazhanov retracted these statmenets, explaining that in reality he soured on the Communist ideology during 1923-4, while working at the Central Committee. However, he was bound to protect his closet-dissident friends remaining behind in the USSR, by casting himself as a "lone avenger" figure.
The source of this article is wikipedia, the free encyclopedia.  The text of this article is licensed under the GFDL.