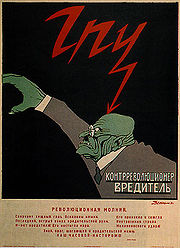 The State Political Directorate was the secret police
Secret police
Secret police are a police agency which operates in secrecy and beyond the law to protect the political power of an individual dictator or an authoritarian political regime....
of the Russian Soviet Federative Socialist Republic
Russian Soviet Federative Socialist Republic
The Russian Soviet Federative Socialist Republic , commonly referred to as Soviet Russia, Bolshevik Russia, or simply Russia, was the largest, most populous and economically developed republic in the former Soviet Union....
(RSFSR) and the Soviet Union
Soviet Union
The Soviet Union , officially the Union of Soviet Socialist Republics , was a constitutionally socialist state that existed in Eurasia between 1922 and 1991....
from 1922 until 1934. Formed from the Cheka
Cheka
Cheka was the first of a succession of Soviet state security organizations. It was created by a decree issued on December 20, 1917, by Vladimir Lenin and subsequently led by aristocrat-turned-communist Felix Dzerzhinsky...
, the original Russian state security organization, on February 6, 1922, it was initially known under the Russian abbreviation GPU--short for "Gosudarstvennoye Politicheskoye Upravlenie of the NKVD
NKVD
The People's Commissariat for Internal Affairs was the public and secret police organization of the Soviet Union that directly executed the rule of power of the Soviets, including political repression, during the era of Joseph Stalin....
of the RSFSR" (Государственное Политическое Управление НКВД РСФСР). Its first chief was the Cheka's former chairman, Felix Dzerzhinsky.

On paper, the new agency was supposed to act with more restraint than the Cheka. For instance, unlike the Cheka, it didn't have the right to arrest and shoot suspected "counterrevolutionaries" at will. As time went on, however, its powers grew even greater (at least in effect) than the Cheka's had been.

The 'Foreign Department' of the GPU was headed by a former Bolshevik and party member, Mikhail Trilisser
Mikhail Trilisser
Mikhail Abramovich Trilisser-Moskvin was a Soviet OGPU chief of the Foreign Department of the Cheka and the OGPU. Later, he worked for the NKVD as a covert bureau chief and Comintern leader.-Career:...
. The Foreign Department was placed in charge of intelligence activities overseas, including espionage and liquidation of 'enemies of the people.' Trilisser himself was later liquidated by Joseph Stalin
Joseph Stalin
Joseph Vissarionovich Stalin was the Premier of the Soviet Union from 6 May 1941 to 5 March 1953. He was among the Bolshevik revolutionaries who brought about the October Revolution and had held the position of first General Secretary of the Communist Party of the Soviet Union's Central Committee...
during the Great Purge
Great Purge
The Great Purge was a series of campaigns of political repression and persecution in the Soviet Union orchestrated by Joseph Stalin from 1936 to 1938...
in 1940.

With the creation of the USSR in December 1922, a unified organization was required to exercise control over state security
State Security
State Security can refer to:* general concepts of security agency or national security* Committee for State Security * State Security * State Security...
throughout the new union. Thus, on November 15, 1923, the GPU left the Russian NKVD and was transferred into the all-union Joint State Political Directorate, also translated as "All-Union State Political Administration". Its official name was "Ob'edinennoe Gosudarstvennoe Politicheskoe Upravlenie under the SNK of the USSR" (Объединённое государственное политическое управление при СНК СССР), or OGPU (ОГПУ).

Perhaps the most spectacular success of the GPU/OGPU was the Trust Operation
Trust Operation
Operation Trust was a counterintelligence operation of the State Political Directorate of the Soviet Union. The operation, which ran from 1921-1926, set up a fake anti-Bolshevik underground organization, "Monarchist Union of Central Russia", MUCR , in order to help the OGPU identify real...
of 1924-1925. OGPU agents contacted émigrés
White Emigre
A white émigré was a Russian who emigrated from Russia in the wake of the Russian Revolution and Russian Civil War, and who was in opposition to the contemporary Russian political climate....
in western Europe and pretended to be representatives of a large group working to overthrow of the communist regime, known as the "Trust". Exiled Russians gave the Trust large sums of money and supplies, as did foreign intelligence agencies. The Trust finally succeeded in luring one of the leading anti-Communist operators, Sidney Reilly
Sidney Reilly
Lieutenant Sidney George Reilly, MC , famously known as the Ace of Spies, was a Jewish Russian-born adventurer and secret agent employed by Scotland Yard, the British Secret Service Bureau and later the Secret Intelligence Service . He is alleged to have spied for at least four nations...
, into Russia to meet with the Trust. Once he was in Russia, he was captured and killed. The Trust was dissolved, and it became a large propaganda success.

From 1927 to 1929, the GPU engaged in intensive investigations of an opposition coup. Stalin soon made a public decree that any and all opposition views should be considered dangerous and gave the GPU the authority to seek out hostile elements. This led to the Shakhty Trial
Shakhty Trial
The Shakhty Trial of 1928 was the first important show trial in the Soviet Union since the trial of the Social Revolutionaries in 1922.It is often alleged that the charges against the defendants were false, confessions fabricated, and torture or the threat of torture employed...
in March 1928, that prosecuted a group of industrial saboteurs involved in a hostile bourgeois conspiracy. This would be the first of many show trials during Stalin's Five Year Plan.

The OGPU was responsible for the creation of the Gulag
Gulag
The Gulag was the government agency that administered the main Soviet forced labor camp systems. While the camps housed a wide range of convicts, from petty criminals to political prisoners, large numbers were convicted by simplified procedures, such as NKVD troikas and other instruments of...
system. It also became the Soviet government's arm for the persecution of the Russian Orthodox Church
Russian Orthodox Church
The Russian Orthodox Church or, alternatively, the Moscow Patriarchate The ROC is often said to be the largest of the Eastern Orthodox churches in the world; including all the autocephalous churches under its umbrella, its adherents number over 150 million worldwide—about half of the 300 million...
, the Greek Catholics, the Latin Catholics
Roman Catholic Church
The Catholic Church, also known as the Roman Catholic Church, is the world's largest Christian church, with over a billion members. Led by the Pope, it defines its mission as spreading the gospel of Jesus Christ, administering the sacraments and exercising charity...
, Islam
Islam
Islam . The most common are and .   : Arabic pronunciation varies regionally. The first vowel ranges from ~~. The second vowel ranges from ~~~...
and other religious organizations, an operation headed by Yevgeny Tuchkov. The OGPU was also the principal secret police agency responsible for the detection, arrest, and liquidation of anarchists and other dissident left-wing factions in the early Soviet Union. Gradually, its de facto powers became even greater than those of the Cheka.

The OGPU was reincorporated into the newly-created all-union People's Commissariat for Internal Affairs (NKVD
NKVD
The People's Commissariat for Internal Affairs was the public and secret police organization of the Soviet Union that directly executed the rule of power of the Soviets, including political repression, during the era of Joseph Stalin....
) in July 1934, becoming its Main Directorate of State Security (GUGB). Its final transformation was into the more widely known Committee for State Security (KGB
KGB
The KGB was the commonly used acronym for the . It was the national security agency of the Soviet Union from 1954 until 1991, and was the premier internal security, intelligence, and secret police organization during that time.The State Security Agency of the Republic of Belarus currently uses the...
).