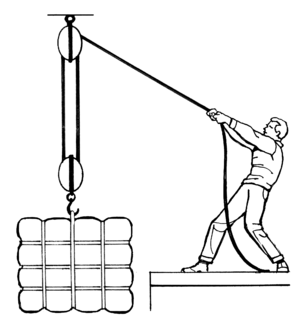 A block and tackle is a system of two or more pulley
Pulley
A pulley, also called a sheave or a drum, is a mechanism composed of a wheel on an axle or shaft that may have a groove between two flanges around its circumference. A rope, cable, belt, or chain usually runs over the wheel and inside the groove, if present...
s with a rope
Rope
A rope is a length of fibres, twisted or braided together to improve strength for pulling and connecting. It has tensile strength but is too flexible to provide compressive strength...
or cable
Cable
A cable is two or more wires running side by side and bonded, twisted or braided together to form a single assembly. In mechanics cables, otherwise known as wire ropes, are used for lifting, hauling and towing or conveying force through tension. In electrical engineering cables are used to carry...
threaded between them, usually used to lift or pull heavy loads.

Although used in many situations, they are especially common on boat
Boat
A boat is a watercraft of any size designed to float or plane, to provide passage across water. Usually this water will be inland or in protected coastal areas. However, boats such as the whaleboat were designed to be operated from a ship in an offshore environment. In naval terms, a boat is a...
s and sailing ship
Sailing ship
The term sailing ship is now used to refer to any large wind-powered vessel. In technical terms, a ship was a sailing vessel with a specific rig of at least three masts, square rigged on all of them, making the sailing adjective redundant. In popular usage "ship" became associated with all large...
s, where motorized aids are usually not available and the task must be performed manually.

A block is a set of pulleys or "sheaves
Pulley
A pulley, also called a sheave or a drum, is a mechanism composed of a wheel on an axle or shaft that may have a groove between two flanges around its circumference. A rope, cable, belt, or chain usually runs over the wheel and inside the groove, if present...
" all mounted on a single axle
Axle
An axle is a central shaft for a rotating wheel or gear. On wheeled vehicles, the axle may be fixed to the wheels, rotating with them, or fixed to its surroundings, with the wheels rotating around the axle. In the former case, bearings or bushings are provided at the mounting points where the axle...
. When rope or line is run through a block or a series of blocks the whole assembly is called a tackle.

An ideal block and tackle with a moving block supported by n rope sections has the mechanical advantage,

where FA is the hauling, or input, force and FB is the load.

Ideal mechanical advantage correlates directly with velocity ratio
Velocity ratio
Velocity Ratio is defined by Classical mechanics as the distance that the point of Effort moved divided by the distance that the point of Load moved as given from here Thus VR = Distance / Distance =...
. The velocity ratio of a tackle refers to the relative velocities of the hauling line to the hauled load. A line with a mechanical advantage of 4 has a velocity ratio of 4:1. In other words, to raise a load at 1 metre per second, the hauling part of the rope must be pulled at 4 metres per second.

Notice that there are two parts of the rope through each pulley in a block, and an additional part for the start of the rope that is attached to one of the blocks. If there are p pulleys in each of the blocks then there are 2p parts for one block and 2p+1 for the other block. This means if the block with the rope attachment is selected for the moving block, then the mechanical advantage is increased by one. This configuration requires the hauling rope to move in the same direction as the load.

The Gun tackle, Double tackle and Threefold purchase have the same number of pulleys in both blocks, one, two and three, respectively. 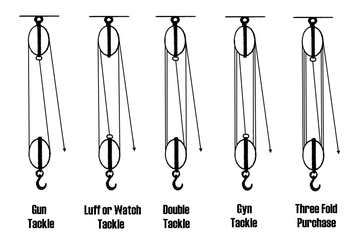 For example, consider a block and tackle with two sheaves on both the moving block and the fixed block. One block has four lines running through its sheaves, and the other block also has four lines including the part of the line being pulled or hauled, with a fifth line attached to a secure point on the block. If the hauling part is coming out of the fixed block, the block and tackle will have a mechanical advantage of four. If the tackle is reversed, so that the hauling part is coming from the moving block, the mechanical advantage is now five.

In the diagram on the right the mechanical advantage of the tackles shown is as follows:

The formula used to find the effort required to raise a given weight is:

is the weight of the load (the output force),

is the ideal mechanical advantage of the system (which is the same as the number of segments of line extending from the moving block), and

is the number of sheaves in the purchase, and there is a roughly

% loss of efficiency at each sheave due to friction, then:

This approximation is more accurate for smaller values of

. A more precise estimate of efficiency is possible by use of the sheave friction factor,

(which may be obtainable from the manufacturer or published tables). The relevant equation is:

The increased force produced by a tackle is offset by both the increased length of rope needed and the friction
Friction
Friction is the force resisting the relative motion of solid surfaces, fluid layers, and/or material elements sliding against each other. There are several types of friction:...
in the system. In order to raise a block and tackle with a mechanical advantage of 6 a distance of 1 metre, it is necessary to pull 6 metres of rope through the blocks. Frictional losses also mean there is a practical point at which the benefit of adding a further sheave is offset by the incremental increase in friction which would require additional force to be applied in order to lift the load. Too much friction may result in the tackle not allowing the load to be released easily, or by the reduction in force needed to move the load being judged insufficient because undue friction has to be overcome as well.

A tackle may be

While roving to advantage is the most efficient use of equipment and resources ( Roving to disadvantage simply adds an extra sheave to change the direction of the pulling line. This doesn't change the velocity ratio but increases friction losses ) , there are several situations in which roving to disadvantage may be more desirable, for example when lifting from a fixed point overhead. The decision of which to use depends on pragmatic considerations for the total ergonomics
Ergonomics
Ergonomics is the study of designing equipment and devices that fit the human body, its movements, and its cognitive abilities.The International Ergonomics Association defines ergonomics as follows:...
of working with a particular situation.