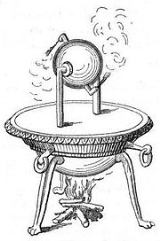 Overview
Hero of Alexandria (c. 10–70 AD) was an ancient Greek mathematician
Greek mathematics
Greek mathematics, as that term is used in this article, is the mathematics written in Greek, developed from the 7th century BC to the 4th century AD around the Eastern shores of the Mediterranean. Greek mathematicians lived in cities spread over the entire Eastern Mediterranean, from Italy to...
and engineer
Engineer
An engineer is a professional practitioner of engineering, concerned with applying scientific knowledge, mathematics and ingenuity to develop solutions for technical problems. Engineers design materials, structures, machines and systems while considering the limitations imposed by practicality,...


Enc. Britannica 2007, "Heron of Alexandria" who was active in his native city of Alexandria
Alexandria
Alexandria is the second-largest city of Egypt, with a population of 4.1 million, extending about along the coast of the Mediterranean Sea in the north central part of the country; it is also the largest city lying directly on the Mediterranean coast. It is Egypt's largest seaport, serving...
, Roman Egypt. He is considered the greatest experimenter of antiquity and his work is representative of the Hellenistic
Hellenistic civilization
Hellenistic civilization represents the zenith of Greek influence in the ancient world from 323 BCE to about 146 BCE...
scientific tradition.

Hero published a well recognized description of a steam-powered device
Steam engine
A steam engine is a heat engine that performs mechanical work using steam as its working fluid.Steam engines are external combustion engines, where the working fluid is separate from the combustion products. Non-combustion heat sources such as solar power, nuclear power or geothermal energy may be...
called an aeolipile
Aeolipile
An aeolipile , also known as a Hero engine, is a rocket style jet engine which spins when heated. In the 1st century AD, Hero of Alexandria described the device, and many sources give him the credit for its invention.The aeolipile Hero described is considered to be the first recorded steam engine...
(hence sometimes called a "Hero engine").

If water is placed in a large round vessel of the steam turbine, and the fire is lit underneath it, what would be the result
More
x