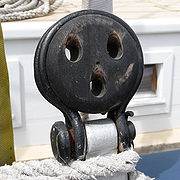 A deadeye is an item used in the standing
Standing rigging
On a sailing boat, standing rigging generally refers to lines, wires, or rods which are more or less fixed in position while the boat is under sail. This term is used in contrast to running rigging, which represents elements of rigging which move and change fairly often while under sail...
and running
Running rigging
Running rigging is the term for the rigging of a sailing vessel that is used for raising, lowering and controlling the sails - as opposed to the standing rigging, which supports the mast and other spars....
rigging
Rigging
Rigging is the apparatus through which the force of the wind is used to propel sailboats and sailing ships forward. This includes masts, yards, sails, and cordage.-Terms and classifications:...
of traditional sailing ships. It is a smallish round thick wood
Wood
Wood is a hard, fibrous tissue found in many trees. It has been used for hundreds of thousands of years for both fuel and as a construction material. It is an organic material, a natural composite of cellulose fibers embedded in a matrix of lignin which resists compression...
en (usually lignum vitae
Lignum vitae
Lignum vitae is a trade wood, also called guayacan or guaiacum, and in parts of Europe known as pockenholz, from trees of the genus Guaiacum. This wood was once very important for applications requiring a material with its extraordinary combination of strength, toughness and density...
) disc with one or more holes through it, perpendicular to the plane
Plane (mathematics)
In mathematics, a plane is a flat, two-dimensional surface. A plane is the two dimensional analogue of a point , a line and a space...
of the disc. Single and triple-hole deadeyes are most commonly seen. The three-holed blocks were called deadeyes because the position of the three holes resemble the eye and nose sockets of a sheep's skull. 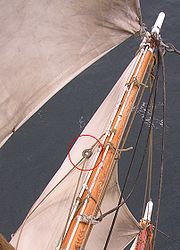 Single deadeyes (or bull's eyes) are used to guide and control a line
Rope
A rope is a length of fibres, twisted or braided together to improve strength for pulling and connecting. It has tensile strength but is too flexible to provide compressive strength...
and, particularly in older vessels, to change its direction. More modern systems would use a block
Block (sailing)
In sailing, a block is a single or multiple pulley. One or a number of sheaves are enclosed in an assembly between cheeks or chocks. In use a block is fixed to the end of a line, to a spar or to a surface...
for this purpose but in traditional rigs with many lines to deal with, designed when blocks were relatively expensive to make, a deadeye provided an acceptable compromise. When blocks came into common use for adjusting running rigging, deadeyes continued to be used for tensioning standing rigging. 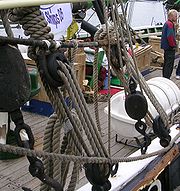 Triple deadeyes are used in pairs; a line
Rope
A rope is a length of fibres, twisted or braided together to improve strength for pulling and connecting. It has tensile strength but is too flexible to provide compressive strength...
called a lanyard
Lanyard
A lanyard is a rope or cord exclusively worn around the neck or wrist to carry something. Usually it is used where there is a risk of losing the object or to ensure it is visible at all times. Aboard a ship, it may refer to a piece of rigging used to secure objects...
is run back and forth between them, through the holes, so that they function again much as a block and tackle
Block and tackle
A block and tackle is a system of two or more pulleys with a rope or cable threaded between them, usually used to lift or pull heavy loads.The pulleys are assembled together to form blocks so that one is fixed and one moves with the load...
would. This provides a mechanical advantage
Mechanical advantage
Mechanical advantage is a measure of the force amplification achieved by using a tool, mechanical device or machine system. Ideally, the device preserves the input power and simply trades off forces against movement to obtain a desired amplification in the output force...
, pulling harder on whatever the deadeyes are attached to. Pairs of deadeyes are placed in the shrouds
Shroud (sailing)
On a sailboat, the shrouds are pieces of standing rigging which hold the mast up from side to side. There is frequently more than one shroud on each side of the boat....
(the lines that hold up the mast
Mast (sailing)
The mast of a sailing vessel is a tall, vertical, or near vertical, spar, or arrangement of spars, which supports the sails. Large ships have several masts, with the size and configuration depending on the style of ship...
), where they are used to create greater tension
Tension (mechanics)
In physics, tension is the magnitude of the pulling force exerted by a string, cable, chain, or similar object on another object. It is the opposite of compression. As tension is the magnitude of a force, it is measured in newtons and is always measured parallel to the string on which it applies...
in the shrouds. To set up the lanyards used with dead-eyes, a suitable grease such as tallow is first applied to the holes. After reeving the lanyard through the deadeyes, the end is hooked to a handy purchase in the rig above, such as the throat halyard. By hauling on the halyard the lanyard in the deadeyes is drawn up taut. A small wooden wedge is knocked into the last hole, to prevent the lanyard sliding back, and the end is unhooked from the purchase and made up on the shroud above the upper deadeye. The wedge can then be removed ready for the next shroud.

In recent decades, as steel wire
Wire
A wire is a single, usually cylindrical, flexible strand or rod of metal. Wires are used to bear mechanical loads and to carry electricity and telecommunications signals. Wire is commonly formed by drawing the metal through a hole in a die or draw plate. Standard sizes are determined by various...
became the prevalent material for sailboat
Sailboat
A sailboat or sailing boat is a boat propelled partly or entirely by sails. The term covers a variety of boats, larger than small vessels such as sailboards and smaller than sailing ships, but distinctions in the size are not strictly defined and what constitutes a sailing ship, sailboat, or a...
rigging, deadeyes and laynards gave way to metal turnbuckle
Turnbuckle
A turnbuckle, stretching screw or bottlescrew is a device for adjusting the tension or length of ropes, cables, tie rods, and other tensioning systems. It normally consists of two threaded eyelets, one screwed into each end of a small metal frame, one with a left-hand thread and the other with a...
s for tensioning the wires. More recently, however, with the advent of high-strength and low-stretch synthetic fibres, some sailboats are using synthetic rope for standing rigging, and deadeyes and lanyards are coming back into use as tensioning devices.
The source of this article is wikipedia, the free encyclopedia.  The text of this article is licensed under the GFDL.