The first inhabitants of the archipelago
Archipelago
An archipelago , sometimes called an island group, is a chain or cluster of islands. The word archipelago is derived from the Greek ἄρχι- – arkhi- and πέλαγος – pélagos through the Italian arcipelago...
arrived around 33,000 years ago from New Guinea, either by boats across the Bismarck Sea or via a temporary land bridge, created by an uplift in the Earth's crust. Later arrivals included the Lapita
Lapita
Lapita is a term applied to an ancient Pacific Ocean archaeological culture which is believed by many archaeologists to be the common ancestor of several cultures in Polynesia, Micronesia, and some coastal areas of Melanesia...
people.

The first Europe
Europe
Europe is, by convention, one of the world's seven continents. Comprising the westernmost peninsula of Eurasia, Europe is generally 'divided' from Asia to its east by the watershed divides of the Ural and Caucasus Mountains, the Ural River, the Caspian and Black Seas, and the waterways connecting...
an to visit these islands was Dutch
Netherlands
The Netherlands is a constituent country of the Kingdom of the Netherlands, located mainly in North-West Europe and with several islands in the Caribbean. Mainland Netherlands borders the North Sea to the north and west, Belgium to the south, and Germany to the east, and shares maritime borders...
explorer Willem Schouten
Willem Schouten
Willem Cornelisz Schouten was a Dutch navigator for the Dutch East India Company. He was the first to sail the Cape Horn route to the Pacific Ocean.- Biography :Willem Cornelisz Schouten was born in c...
in 1616. The islands remained unsettled by western Europeans until they were annexed as part of the German
Germany
Germany , officially the Federal Republic of Germany , is a federal parliamentary republic in Europe. The country consists of 16 states while the capital and largest city is Berlin. Germany covers an area of 357,021 km2 and has a largely temperate seasonal climate...
protectorate
Protectorate
In history, the term protectorate has two different meanings. In its earliest inception, which has been adopted by modern international law, it is an autonomous territory that is protected diplomatically or militarily against third parties by a stronger state or entity...
of German New Guinea
German New Guinea
German New Guinea was the first part of the German colonial empire. It was a protectorate from 1884 until 1914 when it fell to Australia following the outbreak of the First World War. It consisted of the northeastern part of New Guinea and several nearby island groups...
in 1884. The area was named in honour of the Chancellor Otto von Bismarck
Otto von Bismarck
Otto Eduard Leopold, Prince of Bismarck, Duke of Lauenburg , simply known as Otto von Bismarck, was a Prussian-German statesman whose actions unified Germany, made it a major player in world affairs, and created a balance of power that kept Europe at peace after 1871.As Minister President of...
.

On 13 March 1888, a volcano
Volcano
2. Bedrock3. Conduit 4. Base5. Sill6. Dike7. Layers of ash emitted by the volcano8. Flank| 9. Layers of lava emitted by the volcano10. Throat11. Parasitic cone12. Lava flow13. Vent14. Crater15...
erupted on Ritter Island
Ritter Island
Ritter Island is a small crescent-shaped volcanic island 100 kilometres northeast of New Guinea, situated between Umboi Island and Sakar Island....
causing a megatsunami
Megatsunami
Megatsunami is an informal term to describe a tsunami that has initial wave heights that are much larger than normal tsunamis...
. Almost 100% of the volcano fell in to the ocean leaving a small crater lake
Crater lake
A crater lake is a lake that forms in a volcanic crater or caldera, such as a maar; less commonly and with lower association to the term a lake may form in an impact crater caused by a meteorite. Sometimes lakes which form inside calderas are called caldera lakes, but often this distinction is not...
.

Following the outbreak of World War I
World War I
World War I , which was predominantly called the World War or the Great War from its occurrence until 1939, and the First World War or World War I thereafter, was a major war centred in Europe that began on 28 July 1914 and lasted until 11 November 1918...
, the Australian Naval and Military Expeditionary Force
Australian Naval and Military Expeditionary Force
The Australian Naval and Military Expeditionary Force was a small volunteer force of approximately 2,000 men, raised in Australia shortly after the outbreak of the First World War to seize and destroy German wireless stations in German New Guinea in the south-west Pacific...
seized the islands in 1914 and Australia
Australia
Australia , officially the Commonwealth of Australia, is a country in the Southern Hemisphere comprising the mainland of the Australian continent, the island of Tasmania, and numerous smaller islands in the Indian and Pacific Oceans. It is the world's sixth-largest country by total area...
later received a League of Nations mandate
League of Nations mandate
A League of Nations mandate was a legal status for certain territories transferred from the control of one country to another following World War I, or the legal instruments that contained the internationally agreed-upon terms for administering the territory on behalf of the League...
for the islands. They remained under Australian administration — interrupted only by Japan
Japan
Japan is an island nation in East Asia. Located in the Pacific Ocean, it lies to the east of the Sea of Japan, China, North Korea, South Korea and Russia, stretching from the Sea of Okhotsk in the north to the East China Sea and Taiwan in the south...
ese occupation during World War II
World War II
World War II, or the Second World War , was a global conflict lasting from 1939 to 1945, involving most of the world's nations—including all of the great powers—eventually forming two opposing military alliances: the Allies and the Axis...
— until Papua New Guinea became independent in 1975. 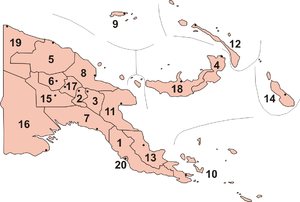