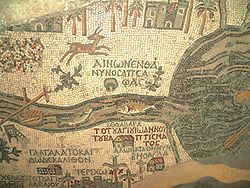 Another solution is sought in the idea of a corruption of the original name into Bethany and Bethabara, the name having the consonants n, b and r after Beth. In (Septuagint, Codex Vaticanus) we find, Baithanabra for Bethnimrah (Massoretic Text), and Sir George Grove in Dictionary of the Bible (arts. "Bethabara" and "Beth-nimrah") identifies Bethabara and Beth-nimrah. The site of the latter was a few miles above Jericho
Jericho
Jericho ; is a city located near the Jordan River in the West Bank of the Palestinian territories. It is the capital of the Jericho Governorate and has a population of more than 20,000. Situated well below sea level on an east-west route north of the Dead Sea, Jericho is the lowest permanently...
(see Beth-nimrah
Beth-nimrah
Beth-Nimrah was a town in ancient Israel.The town was located east of Jordan River and was assigned to the Tribe of Gad. It is described as "in the low plain". The name is preserved in the names Tel Nimrin and Wadi Nimrin, but the location of the old town is believed to be at Tel Bleibil. In the...
), immediately accessible to Jerusalem and all Judea (compare Matthew
Gospel of Matthew
The Gospel According to Matthew is one of the four canonical gospels, one of the three synoptic gospels, and the first book of the New Testament. It tells of the life, ministry, death, and resurrection of Jesus of Nazareth...
; Mark
Gospel of Mark
The Gospel According to Mark , commonly shortened to the Gospel of Mark or simply Mark, is the second book of the New Testament. This canonical account of the life of Jesus of Nazareth is one of the three synoptic gospels. It was thought to be an epitome, which accounts for its place as the second...
). This view has much in its favor.

Then, again, as G. Frederick Wright observes: "The traditional site is at the ford
Ford (crossing)
A ford is a shallow place with good footing where a river or stream may be crossed by wading or in a vehicle. A ford is mostly a natural phenomenon, in contrast to a low water crossing, which is an artificial bridge that allows crossing a river or stream when water is low.The names of many towns...
east of Jericho; but as according to , , it was only one day's journey from Cana
Cana
In the Christian New Testament, the Gospel of John refers a number of times to a town called Cana of Galilee.-The marriage at Cana:Among Christians and other students of the New Testament, Cana is best known as the place where, according to the Fourth Gospel, Jesus performed his first public...
of Galilee
Galilee
Galilee , is a large region in northern Israel which overlaps with much of the administrative North District of the country. Traditionally divided into Upper Galilee , Lower Galilee , and Western Galilee , extending from Dan to the north, at the base of Mount Hermon, along Mount Lebanon to the...
, while according to ; , , and , it was two or three days from Bethany, it must have been well up the river toward Galilee. Conder
Conder
A Conder, in fishing, was someone who stood on the shore – usually on high ground – and signalled fishing boats as to the direction and location of shoals of fish, such as herrings, mackerel and pilchards.-People:* Charles Conder, Australian artist...
discovered a well-known ford near Beisan called Abarah, near the mouth of the valley of Jezreel. This is 20 miles from Cana and 60 miles from Bethany, and all the conditions of the place fit in with the history."