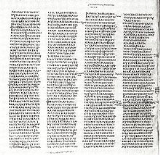 Overview
Codex Sinaiticus is one of the four great uncial codices
Great uncial codices
The great uncial codices or four great uncials are the only remaining uncial codices that contain the entire text of the Greek Bible ....
, an ancient, handwritten copy of the Greek
Koine Greek
Koine Greek is the universal dialect of the Greek language spoken throughout post-Classical antiquity , developing from the Attic dialect, with admixture of elements especially from Ionic....
Bible
Bible
The Bible refers to any one of the collections of the primary religious texts of Judaism and Christianity. There is no common version of the Bible, as the individual books , their contents and their order vary among denominations...
. It is an Alexandrian text-type
Alexandrian text-type
The Alexandrian text-type , associated with Alexandria, is one of several text-types used in New Testament textual criticism to describe and group the textual character of biblical manuscripts...
manuscript written in the 4th century in uncial letters on parchment. Current scholarship considers the Codex Sinaiticus to be one of the best Greek texts of the New Testament
New Testament
The New Testament is the second major division of the Christian biblical canon, the first such division being the much longer Old Testament....
, along with that of the Codex Vaticanus
Codex Vaticanus
The Codex Vaticanus , is one of the oldest extant manuscripts of the Greek Bible , one of the four great uncial codices. The Codex is named for the residence in the Vatican Library, where it has been stored since at least the 15th century...
. Until the discovery by Tischendorf
Constantin von Tischendorf
Lobegott Friedrich Constantin Tischendorf was a noted German Biblical scholar. He deciphered the Codex Ephraemi Rescriptus, a 5th century Greek manuscript of the New Testament, in the 1840s, and rediscovered the Codex Sinaiticus, a 4th century New Testament manuscript, in 1859.Tischendorf...
of the Sinaiticus text, the Codex Vaticanus was unrivaled.

What is the significance of the letters in the column margins? Are they place holders like our chapter numbers. They are overscored; are they abrevi...
More
x