Encyclopedia
The Bell 47 is a two-bladed, single engine, light helicopter
Helicopter
A helicopter is a type of rotorcraft in which lift and thrust are supplied by one or more engine-driven rotors. This allows the helicopter to take off and land vertically, to hover, and to fly forwards, backwards, and laterally...
manufactured by Bell Helicopter. Based on the third Model 30
Bell 30
|-See also:-External links: August 1944 article on Bell 30. Photo at bottom of page....
prototype, Bell's first helicopter designed by Arthur M. Young
Arthur M. Young
Arthur Middleton Young was an American inventor, helicopter pioneer, cosmologist, philosopher, astrologer and author. Young was the designer of Bell Helicopter's first helicopter, the Model 30, and inventor of the stabilizer bar used on many of Bell's early helicopter designs...
, the Bell 47 became the first helicopter certified for civilian use on 8 March 1946. More than 5,600 Bell 47 aircraft were produced, including those produced under license by Agusta
Agusta
Agusta is an Italian helicopter manufacturer. It is based in Samarate, Northern Italy. It is a subsidiary of Finmeccanica. The company was founded by Count Giovanni Agusta in 1923, who flew his first airplane in 1907...
in Italy
Italy
Italy , officially the Italian Republic languages]] under the European Charter for Regional or Minority Languages. In each of these, Italy's official name is as follows:;;;;;;;;), is a unitary parliamentary republic in South-Central Europe. To the north it borders France, Switzerland, Austria and...
, Kawasaki Heavy Industries
Kawasaki Heavy Industries
is an international corporation based in Japan. It has headquarters in both Chūō-ku, Kobe and Minato, Tokyo.The company is named after its founder Shōzō Kawasaki and has no connection with the city of Kawasaki, Kanagawa....
in Japan
Japan
Japan is an island nation in East Asia. Located in the Pacific Ocean, it lies to the east of the Sea of Japan, China, North Korea, South Korea and Russia, stretching from the Sea of Okhotsk in the north to the East China Sea and Taiwan in the south...
, and Westland Aircraft
Westland Aircraft
Westland Aircraft was a British aircraft manufacturer located in Yeovil in Somerset. Formed as a separate company by separation from Petters Ltd just before the start of the Second World War, Westland had been building aircraft since 1915...
in the United Kingdom
United Kingdom
The United Kingdom of Great Britain and Northern IrelandIn the United Kingdom and Dependencies, other languages have been officially recognised as legitimate autochthonous languages under the European Charter for Regional or Minority Languages...
. The Bell 47J Ranger
Bell 47J Ranger
|-See also:-References:* -External links:* from The International Directory of Civil Aircraft by Gerard Frawley...
is a modified version with a fully enclosed cabin and fuselage.

Early models varied in appearance, with open cockpit
Cockpit
A cockpit or flight deck is the area, usually near the front of an aircraft, from which a pilot controls the aircraft. Most modern cockpits are enclosed, except on some small aircraft, and cockpits on large airliners are also physically separated from the cabin...
s or sheet metal
Sheet metal
Sheet metal is simply metal formed into thin and flat pieces. It is one of the fundamental forms used in metalworking, and can be cut and bent into a variety of different shapes. Countless everyday objects are constructed of the material...
cabins, fabric covered or open structures, some with four-wheel landing gear.
Later model D and Korean War H-13D and E types settled on a more utilitarian style. The most common model, the 47G introduced in 1953, can be recognized by the full bubble canopy
Bubble canopy
A bubble canopy is a canopy made like a soap bubble, which attempts to provide 360° vision to the pilot.-History:Bubble canopies have been in use since World War II. The British had already developed the "Malcolm hood", which was a bulged canopy, but the British Miles M.20 was one of the first...
, exposed welded-tube tail boom, saddle fuel tank
Fuel tank
A fuel tank is safe container for flammable fluids. Though any storage tank for fuel may be so called, the term is typically applied to part of an engine system in which the fuel is stored and propelled or released into an engine...
s and skid landing gear.

The later three-seat 47H had an enclosed cabin with full cowling and monocoque
Monocoque
Monocoque is a construction technique that supports structural load by using an object's external skin, as opposed to using an internal frame or truss that is then covered with a non-load-bearing skin or coachwork...
tail boom. It was an attempt to market a "luxury" version of the basic 47G. Relatively few were produced.

Engine
Engine
An engine or motor is a machine designed to convert energy into useful mechanical motion. Heat engines, including internal combustion engines and external combustion engines burn a fuel to create heat which is then used to create motion...
s were Franklin
Franklin Engine Company
The Franklin Engine Company was a manufacturer of aircraft engines, formed as the H. H. Franklin Co. in 1902, located in Syracuse, New York, United States. Barely surviving bankruptcy in 1933, the company was purchased by a group of ex-employees and renamed Aircooled Motors in 1937...
or Lycoming
Lycoming Engines
Lycoming Engines is a U.S. aircraft engine company, known primarily for its general aviation engines. For most of its history Lycoming has been part of the AVCO group as AVCO Lycoming. In 1987 AVCO was purchased by Textron to become Textron Lycoming...
vertically-mounted piston engine
Reciprocating engine
A reciprocating engine, also often known as a piston engine, is a heat engine that uses one or more reciprocating pistons to convert pressure into a rotating motion. This article describes the common features of all types...
s of 200 to 305 HP
Horsepower
Horsepower is the name of several units of measurement of power. The most common definitions equal between 735.5 and 750 watts.Horsepower was originally defined to compare the output of steam engines with the power of draft horses in continuous operation. The unit was widely adopted to measure the...
(150 to 230 kW
Watt
The watt is a derived unit of power in the International System of Units , named after the Scottish engineer James Watt . The unit, defined as one joule per second, measures the rate of energy conversion.-Definition:...
). Seating varied from two (early 47s and the later G-5A) to four (the J and KH-4).

As of 2005, many are still in use as trainer
Trainer (aircraft)
A trainer is a class of aircraft designed specifically to facilitate in-flight training of pilots and aircrews. The use of a dedicated trainer aircraft with additional safety features—such as tandem flight controls, forgiving flight characteristics and a simplified cockpit arrangement—allows...
s and in agriculture
Agricultural aircraft
An agricultural aircraft is an aircraft that has been built or converted for agricultural use - usually aerial application of pesticides or fertilizer ; in these roles they are referred to as "crop dusters" or "top dressers"...
.

Bell 47s were produced in Japan by a Bell and Kawasaki venture; this led to the Kawasaki KH-4 variant, a four-seat version of the Model 47 with a cabin similar to the Bell 47J. It differed from the "J" in having a standard uncovered tailboom and fuel tanks like the G series. It was sold throughout Asia, and some were used in Australia.

In February 2010, the Bell 47 type certificate
Type certificate
A Type Certificate, is awarded by aviation regulating bodies to aerospace manufacturers after it has been established that the particular design of a civil aircraft, engine, or propeller has fulfilled the regulating bodies' current prevailing airworthiness requirements for the safe conduct of...
s were transferred to Scott's Helicopter Services.

The Bell 47 helicopter entered U.S. military service in late 1946, in a variety of versions and designations for three decades. In the Korean War
Korean War
The Korean War was a conventional war between South Korea, supported by the United Nations, and North Korea, supported by the People's Republic of China , with military material aid from the Soviet Union...
, it was designated the H-13 Sioux
H-13 Sioux
The H-13 Sioux was a two-bladed, single engine, light helicopter built by Bell Helicopter. Westland Aircraft manufactured the Sioux under license for the British military as the Sioux AH.1 and HT.2.-Development:...
by the United States Army
United States Army
The United States Army is the main branch of the United States Armed Forces responsible for land-based military operations. It is the largest and oldest established branch of the U.S. military, and is one of seven U.S. uniformed services...
. It has also served as the helicopter of choice for basic helicopter flight instruction in many countries.

NASA
NASA
The National Aeronautics and Space Administration is the agency of the United States government that is responsible for the nation's civilian space program and for aeronautics and aerospace research...
had a number of Bell 47s during the Apollo program, used by astronauts as trainers for the Lunar Lander
Apollo Lunar Module
The Apollo Lunar Module was the lander portion of the Apollo spacecraft built for the US Apollo program by Grumman to carry a crew of two from lunar orbit to the surface and back...
. Eugene Cernan had a near disastrous accident shortly before his flight to the moon on Apollo 17
Apollo 17
Apollo 17 was the eleventh and final manned mission in the American Apollo space program. Launched at 12:33 a.m. EST on December 7, 1972, with a three-member crew consisting of Commander Eugene Cernan, Command Module Pilot Ronald Evans, and Lunar Module Pilot Harrison Schmitt, Apollo 17 remains the...
, crashing into the Indian River
Indian River (Florida)
The Indian River is a waterway in Florida, a part of the Indian River Lagoon system which forms the Atlantic Intracoastal Waterway. It extends southward from the Ponce de Leon inlet in New Smyrna Beach, Florida [Volusia County] southward and across the "Haulover Canal" and along the western shore...
.

The Los Angeles County Fire Department in California used the Bell 47 as the department's very first aircraft in 1957.

The San Diego County Sheriff's Department used the Bell 47 when it started its law enforcement helicopter division in 1971. 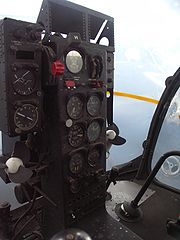 Bell 47G: Combines a 149 kW Franklin engine with the three-seat configuration of the 47D-1 and introduced the twin saddle-bag fuel tank configuration.
Bell 47G-2: Powered by the Lycoming VO-435 engine. Produced under license by Westland Aircraft
Westland Aircraft
Westland Aircraft was a British aircraft manufacturer located in Yeovil in Somerset. Formed as a separate company by separation from Petters Ltd just before the start of the Second World War, Westland had been building aircraft since 1915...
as the Westland Sioux, for the UK military.
Bell 47G-2A: Powered by a 179 kW version of the VO-435.
Bell 47G-2A-1: Wider cabin, improved rotor blades and increased fuel capacity.
Bell 47G-3: Powered by a supercharged 168 kW Franklin 6VS-335-A.
Bell 47G-3B: Powered by a turbocharged 209 kW Avco Lycoming TVO-435.
Bell 47G-4: Three-seat helicopter powered by an Avco Lycoming VO-540
Lycoming O-540
|-Specifications :-See also:-External links:...
engine.
Bell 47G-5: A three-seat, utility version. A two-seat agricultural version was later known as the Ag-5. The 47G-5 was the last model to be produced by Bell.
Bell 47H-1: A three-seat version with an enclosed cabin and fuselage.
Bell 47J Ranger
Bell 47J Ranger
|-See also:-References:* -External links:* from The International Directory of Civil Aircraft by Gerard Frawley...
: A four-seat version powered by an Avco Lycoming VO-435 engine. 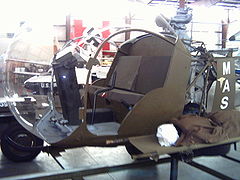 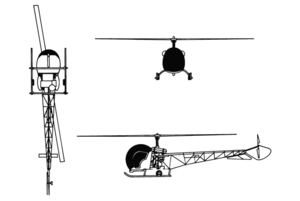