Encyclopedia
The Bavarian National Museum (Bayerisches Nationalmuseum) in Munich
Munich
Munich The city's motto is "" . Before 2006, it was "Weltstadt mit Herz" . Its native name, , is derived from the Old High German Munichen, meaning "by the monks' place". The city's name derives from the monks of the Benedictine order who founded the city; hence the monk depicted on the city's coat...
is one of the most important cultural history museums in Europe.

The building, erected in the style of historism
Historicism (art)
Historicism refers to artistic styles that draw their inspiration from copying historic styles or artisans. After neo-classicism, which could itself be considered a historicist movement, the 19th century saw a new historicist phase marked by a return to a more ancient classicism, in particular in...
by Gabriel von Seidl 1894-1900, is one of the most original and significant museum buildings of its time. It is situated in the Prinzregentenstrasse, one of the city's four royal avenues. The house replaced an older building which houses today the State Museum of Ethnology
State Museum of Ethnology
The Bavarian State Museum of Ethnology in Munich, Germany is a museum for Non-European artworks and objects of cultural value.-The building:...
. 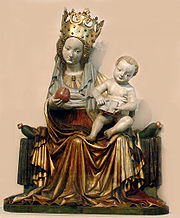 The art historical collection displays artworks in a tour through more than forty rooms from the hall for late antiquity
Late Antiquity
Late Antiquity is a periodization used by historians to describe the time of transition from Classical Antiquity to the Middle Ages, in both mainland Europe and the Mediterranean world. Precise boundaries for the period are a matter of debate, but noted historian of the period Peter Brown proposed...
and Romanesque art
Romanesque art
Romanesque art refers to the art of Western Europe from approximately 1000 AD to the rise of the Gothic style in the 13th century, or later, depending on region. The preceding period is increasingly known as the Pre-Romanesque...
via the rooms for Gothic
Gothic art
Gothic art was a Medieval art movement that developed in France out of Romanesque art in the mid-12th century, led by the concurrent development of Gothic architecture. It spread to all of Western Europe, but took over art more completely north of the Alps, never quite effacing more classical...
, Renaissance
Renaissance
The Renaissance was a cultural movement that spanned roughly the 14th to the 17th century, beginning in Italy in the Late Middle Ages and later spreading to the rest of Europe. The term is also used more loosely to refer to the historical era, but since the changes of the Renaissance were not...
, Baroque
Baroque
The Baroque is a period and the style that used exaggerated motion and clear, easily interpreted detail to produce drama, tension, exuberance, and grandeur in sculpture, painting, literature, dance, and music...
and Rococo
Rococo
Rococo , also referred to as "Late Baroque", is an 18th-century style which developed as Baroque artists gave up their symmetry and became increasingly ornate, florid, and playful...
art to the exhibits of Classicism
Classicism
Classicism, in the arts, refers generally to a high regard for classical antiquity, as setting standards for taste which the classicists seek to emulate. The art of classicism typically seeks to be formal and restrained: of the Discobolus Sir Kenneth Clark observed, "if we object to his restraint...
and Art Nouveau
Art Nouveau
Art Nouveau is an international philosophy and style of art, architecture and applied art—especially the decorative arts—that were most popular during 1890–1910. The name "Art Nouveau" is French for "new art"...
.
The museum exhibits especially ivory reliefs, goldsmith works, textiles, glass painting, tapestries and shrines. The displayed sculptures were created by foremost sculptors like Erasmus Grasser
Erasmus Grasser
Erasmus Grasser was a leading sculptor in Munich in the early 16th century.He developed in an animated and realistic style, furthering on the works of Nikolaus Gerhaert...
, Tilman Riemenschneider
Tilman Riemenschneider
Tilman Riemenschneider was a German sculptor and woodcarver active in Würzburg from 1483. He was one of the most prolific and versatile sculptors of the transition period between late Gothic and Renaissance, a master in stone and limewood.- Biography :Tilman Riemenschneider was born between 1459...
, Hans Multscher
Hans Multscher
Hans Multscher was a German sculptor and painter.Multscher was born in Reichenhofen .He made himself with new artistic styles from northern France and the Netherlands, and became a free citizen of the city of Ulm in 1427. There, he married Adelheid Kitzin the same year...
, Hans Leinberger, Adam Krafft, Giovanni Bologna, Hubert Gerhard, Adriaen de Vries
Adriaen de Vries
Adriaen de Vries was a Northern Mannerist sculptor born in the Netherlands, whose international style crossed the threshold to the Baroque; he excelled in refined modelling and bronze casting and in the manipulation of patina and became the most famous European sculptor of his generation...
, Johann Baptist Straub
Johann Baptist Straub
Johann Baptist Straub was a German Rococo sculptor.-Biography:Straub was born in Wiesensteig, into a family of sculptors. His father Johann George Straub and his brothers Philipp Jakob, Joseph, and Johann Georg Straub were also sculptors, as was his nephew Franz Xaver Messerschmidt. J. B...
, Ferdinand Tietz, Ignaz Günther
Ignaz Günther
Ignaz Günther was a German sculptor and woodcarver working in the Bavarian rococo tradition.He was born in Altmannstein, Germany, where he received his earliest training from his father, then studied in Munich under the court sculptor Johann Baptist Straub from 1743 to 1750 and during his...
, Matthias Steinl
Matthias Steinl
Matthias Steinl was an Austrian painter, architect and designer, and one of the country's best known Baroque sculptors...
, and Ludwig Schwanthaler.

The western side wing of the museum houses The Bollert Collection with late medieval sculptures.

The folklore collection houses for example traditional Bavarian furnitures, rural pottery, crockery and religious folklore including an outstanding collection of Neapolitan
Naples
Naples is a city in Southern Italy, situated on the country's west coast by the Gulf of Naples. Lying between two notable volcanic regions, Mount Vesuvius and the Phlegraean Fields, it is the capital of the region of Campania and of the province of Naples...
, Sicilian
Sicily
Sicily is a region of Italy, and is the largest island in the Mediterranean Sea. Along with the surrounding minor islands, it constitutes an autonomous region of Italy, the Regione Autonoma Siciliana Sicily has a rich and unique culture, especially with regard to the arts, music, literature,...
, Tyrolian
County of Tyrol
The County of Tyrol, Princely County from 1504, was a State of the Holy Roman Empire, from 1814 a province of the Austrian Empire and from 1867 a Cisleithanian crown land of Austria-Hungary...
and Bavaria
Bavaria
Bavaria, formally the Free State of Bavaria is a state of Germany, located in the southeast of Germany. With an area of , it is the largest state by area, forming almost 20% of the total land area of Germany...
n wood carvings including street scenes and Nativity Scene
Nativity scene
A nativity scene, manger scene, krippe, crèche, or crib, is a depiction of the birth of Jesus as described in the gospels of Matthew and Luke...
s.