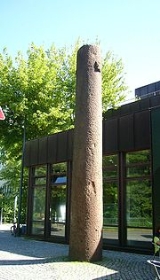 Encyclopedia
The Bavarian State Archaeological Collection in Munich
Munich
Munich The city's motto is "" . Before 2006, it was "Weltstadt mit Herz" . Its native name, , is derived from the Old High German Munichen, meaning "by the monks' place". The city's name derives from the monks of the Benedictine order who founded the city; hence the monk depicted on the city's coat...
is the central museum of prehistory
Prehistory
Prehistory is the span of time before recorded history. Prehistory can refer to the period of human existence before the availability of those written records with which recorded history begins. More broadly, it refers to all the time preceding human existence and the invention of writing...
of the State of Bavaria
Bavaria
Bavaria, formally the Free State of Bavaria is a state of Germany, located in the southeast of Germany. With an area of , it is the largest state by area, forming almost 20% of the total land area of Germany...
and one of the most important archaeological
Archaeology
Archaeology, or archeology , is the study of human society, primarily through the recovery and analysis of the material culture and environmental data that they have left behind, which includes artifacts, architecture, biofacts and cultural landscapes...
collections and cultural history
Cultural history
The term cultural history refers both to an academic discipline and to its subject matter.Cultural history, as a discipline, at least in its common definition since the 1970s, often combines the approaches of anthropology and history to look at popular cultural traditions and cultural...
museums in Germany
Germany
Germany , officially the Federal Republic of Germany , is a federal parliamentary republic in Europe. The country consists of 16 states while the capital and largest city is Berlin. Germany covers an area of 357,021 km2 and has a largely temperate seasonal climate...
.

The museum was founded on 14 October 1885 on the initiative of the physiologist and anthropologist Johannes Ranke, a nephew of Leopold von Ranke
Leopold von Ranke
Leopold von Ranke was a German historian, considered one of the founders of modern source-based history. Ranke set the standards for much of later historical writing, introducing such ideas as reliance on primary sources , an emphasis on narrative history and especially international politics .-...
. As part of his teaching at the University of Munich, he had assembled a private collection of both original prehistoric objects of Bavarian origin and copies and held a well received exhibition of them in March–April that year, after which he donated them to the Kingdom of Bavaria
Kingdom of Bavaria
The Kingdom of Bavaria was a German state that existed from 1806 to 1918. The Bavarian Elector Maximilian IV Joseph of the House of Wittelsbach became the first King of Bavaria in 1806 as Maximilian I Joseph. The monarchy would remain held by the Wittelsbachs until the kingdom's dissolution in 1918...
. He had previously founded the Museums-Verein für Vorgeschichtliche Alterthümer Baierns (Museum Association for Prehistoric Artifacts of Bavaria). That same autumn, holdings of the Royal Ethnographic Museum were integrated into the new institution, and with the assistance of the Bavarian Academy of Sciences, a collection of major finds from the Little Switzerland region of Franconia, including from tumuli
Tumulus
A tumulus is a mound of earth and stones raised over a grave or graves. Tumuli are also known as barrows, burial mounds, Hügelgrab or kurgans, and can be found throughout much of the world. A tumulus composed largely or entirely of stones is usually referred to as a cairn...
, was built up in 1885 and 1886. Initially the museum was an independent division of the Conservatory of the Palaeontological Collection in the Museum of Ethnography (today the Bavarian State Collection for Palaeontology and Geology); on 7 February 1889, at Ranke's urging, it became an independent subsidiary of the General Conservatory of Natural Science Collections of the Kingdom of Bavaria, with him as curator. In 1902 it was renamed the Anthropologisch-Prähistorisches Sammlung des Staates (Anthropological-Prehistoric Collection of the State), in 1927, separated from the anthropology collection, and in 1935, named the Vor- und Frühgeschichtliche Staatssammlung.

The collection was originally exhibited in the Old Academy
Old Academy (Munich)
Die Old Academy , also called Wilhelminum, is a building in the center of Munich, Germany. Dating from the 16th century, it has a Renaissance facade and four inner courtyards.- History :...
or Wilhelminum, but beginning in 1939 was no longer on permanent public view, and in 1944 the exhibition space was destroyed. After the war, since it was no longer together with the other natural science museums, it was also made an independent organisation; in 1954 it reverted to the name Prähistorische Staatssammlung. Until 1975, it was housed in the Bavarian National Museum. Beginning in February 1976, it reopened one department at a time in a specially designed building on the Englischer Garten, next to the Bavarian National Museum. The building is of reinforced concrete with weathering steel panels designed to rust, and was designed by Helmut von Werz, Johann-Christoph Ottow, Erhard Bachmann and Michel Marx. The new building was the culmination of many years of effort by Hans-Jörg Kellner, curator of the State Prehistoric Collection from 1960 to 1984, and the Vereinigung der Freunde der Bayerischen Vor- und Frühgeschichte (Association of Friends of Bavarian Pre- and Early History), which he founded in 1973.

On 11 May 2000 the museum was renamed to the State Archaeological Collection in response to the wishes of its then curator, Ludwig Wammser, to better reflect its scope, which had come to include medieval and early modern periods both in and outside Bavaria.

In 2010 Wammser was succeeded as director by Rupert Gebhard. 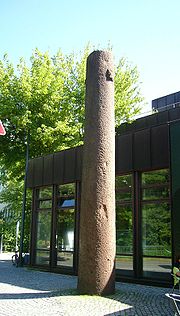 Scope and emphases of the collection

The museum houses the Bavarian state collection of prehistory
Prehistory
Prehistory is the span of time before recorded history. Prehistory can refer to the period of human existence before the availability of those written records with which recorded history begins. More broadly, it refers to all the time preceding human existence and the invention of writing...
, represented by mostly local exhibits of the Paleolithic
Paleolithic
The Paleolithic Age, Era or Period, is a prehistoric period of human history distinguished by the development of the most primitive stone tools discovered , and covers roughly 99% of human technological prehistory...
, the Neolithic
Neolithic
The Neolithic Age, Era, or Period, or New Stone Age, was a period in the development of human technology, beginning about 9500 BC in some parts of the Middle East, and later in other parts of the world. It is traditionally considered as the last part of the Stone Age...
, the Bronze Age
Bronze Age
The Bronze Age is a period characterized by the use of copper and its alloy bronze as the chief hard materials in the manufacture of some implements and weapons. Chronologically, it stands between the Stone Age and Iron Age...
, the Urnfield culture
Urnfield culture
The Urnfield culture was a late Bronze Age culture of central Europe. The name comes from the custom of cremating the dead and placing their ashes in urns which were then buried in fields...
, the Hallstatt culture
Hallstatt culture
The Hallstatt culture was the predominant Central European culture from the 8th to 6th centuries BC , developing out of the Urnfield culture of the 12th century BC and followed in much of Central Europe by the La Tène culture.By the 6th century BC, the Hallstatt culture extended for some...
, the era of the Celts
Celtic art
Celtic art is the art associated with the peoples known as Celts; those who spoke the Celtic languages in Europe from pre-history through to the modern period, as well as the art of ancient peoples whose language is uncertain, but have cultural and stylistic similarities with speakers of Celtic...
, the Roman Empire
Roman Empire
The Roman Empire was the post-Republican period of the ancient Roman civilization, characterised by an autocratic form of government and large territorial holdings in Europe and around the Mediterranean....
, the Migration Period
Migration Period
The Migration Period, also called the Barbarian Invasions , was a period of intensified human migration in Europe that occurred from c. 400 to 800 CE. This period marked the transition from Late Antiquity to the Early Middle Ages...
and the Early Middle Ages
Early Middle Ages
The Early Middle Ages was the period of European history lasting from the 5th century to approximately 1000. The Early Middle Ages followed the decline of the Western Roman Empire and preceded the High Middle Ages...
with some items from later periods. For example, it has on permanent exhibit Mesolithic
Mesolithic
The Mesolithic is an archaeological concept used to refer to certain groups of archaeological cultures defined as falling between the Paleolithic and the Neolithic....
finds from Speckberg, near Eichstätt
Eichstätt
Eichstätt is a town in the federal state of Bavaria, Germany, and capital of the District of Eichstätt. It is located along the Altmühl River, at , and had a population of 13,078 in 2002. It is home to the Katholische Universität Eichstätt-Ingolstadt, the lone Catholic university in Germany. The...
, artifacts from the Celtic oppidum of Manching
Oppidum of Manching
The Oppidum of Manching was a large Celtic proto-urban or city-like settlement at modern-day Manching , Bavaria . The settlement was founded in the 3rd century BC and existed until c. 50-30 BC. It reached its largest extent during the late La Tène period , when it had a size of 380 hectares...
and parts of a Roman bath found in the Tegelberg settlement near Schwangau
Schwangau
Schwangau is a municipality in the district of Ostallgäu in Bavaria, Germany. The village lies 4 km from the larger town of Füssen and just 1.5 km from Hohenschwangau, a collection of tourist-oriented facilities adjacent to the major tourist attractions of Schloss Neuschwanstein and Schloss...
, and in addition the bog body
Bog body
Bog bodies, which are also known as bog people, are the naturally preserved human corpses found in the sphagnum bogs in Northern Europe. Unlike most ancient human remains, bog bodies have retained their skin and internal organs due to the unusual conditions of the surrounding area...
of a 20-year-old girl dating to the 16th century and models of dugout
Dugout (boat)
A dugout or dugout canoe is a boat made from a hollowed tree trunk. Other names for this type of boat are logboat and monoxylon. Monoxylon is Greek -- mono- + ξύλον xylon -- and is mostly used in classic Greek texts. In Germany they are called einbaum )...
s from various periods.

The collection has been structured in a chronological exhibition, which is continued by the collection of the adjoining Bavarian National Museum.

The museum has its own facilities for archaeological restoration, to preserve finds from further degradation and prepare them for scientific study or display. In addition, the facility tests questionable finds to determine whether they are genuine, demonstrates methods, and performs research into the characteristics of ancient materials and modern media and conservation materials.

The permanent exhibit is supplemented by special exhibitions in cooperation with other museums, which usually take place annually. These have included:

Bavarian state exhibitions are presented at irregular intervals in partnership with a variety of other institutions. These have included:

The Archäologisches Museum Neu-Ulm (Neu-Ulm Archaeological Museum) in Neu-Ulm
Neu-Ulm
Neu-Ulm is a town in Bavaria, capital of the Neu-Ulm district. Neighbouring towns include Ulm, Senden, Pfaffenhofen an der Roth, Holzheim, Nersingen and Elchingen. The population is 51,110 .-History:...
opened in 1998 and featured a reconstruction of the Hallstatt period chieftain's grave from Illerberg in Vöhringen
Vöhringen, Bavaria
Vöhringen is a town in the district of Neu-Ulm in Bavaria, Germany. It is located on the Iller, approximately 18 km south of Ulm and 40&nbaspkm north of Memmingen...
. It closed in 2008.