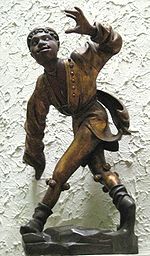 Erasmus Grasser was a leading sculptor
Sculpture
Sculpture is three-dimensional artwork created by shaping or combining hard materials—typically stone such as marble—or metal, glass, or wood. Softer materials can also be used, such as clay, textiles, plastics, polymers and softer metals...
in Munich
Munich
Munich The city's motto is "" . Before 2006, it was "Weltstadt mit Herz" . Its native name, , is derived from the Old High German Munichen, meaning "by the monks' place". The city's name derives from the monks of the Benedictine order who founded the city; hence the monk depicted on the city's coat...
in the early 16th century.

He developed in an animated and realistic style, furthering on the works of Nikolaus Gerhaert
Nikolaus Gerhaert
Nikolaus Gerhaert , also known as Nikolaus Gerhaert von Leyden, was a sculptor of Dutch origin, although aside from his sculptures, few details are known of his life.- Biography :...
. He worked mainly in wood, and is best known for the 16 (now 10) figures of Moriskentänzer (Morris dance
Morris dance
Morris dance is a form of English folk dance usually accompanied by music. It is based on rhythmic stepping and the execution of choreographed figures by a group of dancers. Implements such as sticks, swords, handkerchiefs and bells may also be wielded by the dancers...
rs) (1480), the madonna of the high altar in St Mary (Ramersdorf), the oak choir stalls at the cathedral of Munich (1502) and the high altar at Reichersdorf (1502–1506).