Encyclopedia
Bartolommeo Bandinelli, actually Bartolommeo Brandini (17 October 1493 – shortly before 7 February 1560), was a Renaissance
Renaissance
The Renaissance was a cultural movement that spanned roughly the 14th to the 17th century, beginning in Italy in the Late Middle Ages and later spreading to the rest of Europe. The term is also used more loosely to refer to the historical era, but since the changes of the Renaissance were not...
Italian
Italy
Italy , officially the Italian Republic languages]] under the European Charter for Regional or Minority Languages. In each of these, Italy's official name is as follows:;;;;;;;;), is a unitary parliamentary republic in South-Central Europe. To the north it borders France, Switzerland, Austria and...
sculptor, draughtsman and painter. 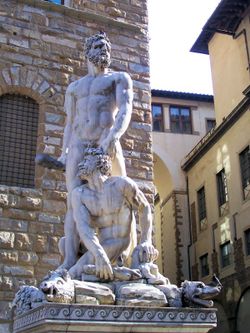 Bandinelli was the son of a prominent Florentine
Florence
Florence is the capital city of the Italian region of Tuscany and of the province of Florence. It is the most populous city in Tuscany, with approximately 370,000 inhabitants, expanding to over 1.5 million in the metropolitan area....
goldsmith
Goldsmith
A goldsmith is a metalworker who specializes in working with gold and other precious metals. Since ancient times the techniques of a goldsmith have evolved very little in order to produce items of jewelry of quality standards. In modern times actual goldsmiths are rare...
, and first apprenticed in his shop. As a boy, he was apprenticed under Giovanni Francesco Rustici
Giovanni Francesco Rustici
Giovanni Francesco Rustici was an Italian Renaissance painter and sculptor.He was born into a noble family of Florence, with an independent income...
, a sculptor friend of Leonardo da Vinci
Leonardo da Vinci
Leonardo di ser Piero da Vinci was an Italian Renaissance polymath: painter, sculptor, architect, musician, scientist, mathematician, engineer, inventor, anatomist, geologist, cartographer, botanist and writer whose genius, perhaps more than that of any other figure, epitomized the Renaissance...
. Among his earliest works was a Saint Jerome in wax, made for Giuliano de' Medici
Giuliano di Lorenzo de' Medici
Giuliano di Lorenzo de' Medici was an Italian nobleman, one of three sons of Lorenzo the Magnificent.-Biography:He was born in Florence, Italy. His brothers were Piero and Giovanni de' Medici....
, identified as Bandinelli's by John Pope-Hennessy

Giorgio Vasari
Giorgio Vasari
Giorgio Vasari was an Italian painter, writer, historian, and architect, who is famous today for his biographies of Italian artists, considered the ideological foundation of art-historical writing.-Biography:...
, a former pupil in Bandinelli's workshop, claimed Bandinelli was driven by jealousy of Benvenuto Cellini
Benvenuto Cellini
Benvenuto Cellini was an Italian goldsmith, sculptor, painter, soldier and musician, who also wrote a famous autobiography. He was one of the most important artists of Mannerism.-Youth:...
and Michelangelo
Michelangelo
Michelangelo di Lodovico Buonarroti Simoni , commonly known as Michelangelo, was an Italian Renaissance painter, sculptor, architect, poet, and engineer who exerted an unparalleled influence on the development of Western art...
; and recounts that:
Bandinelli's lifelong obsession with Michelangelo is a recurring theme in assessments of his career.

Bandinelli was a leader in the group of Florentine Mannerists who were inspired by the revived interest in Donatello
Donatello
Donato di Niccolò di Betto Bardi , also known as Donatello, was an early Renaissance Italian artist and sculptor from Florence...
attendant on the installation of Donatello's bas-relief panels for the pulpit in San Lorenzo
Basilica di San Lorenzo di Firenze
The Basilica di San Lorenzo is one of the largest churches of Florence, Italy, situated at the centre of the city’s main market district, and the burial place of all the principal members of the Medici family from Cosimo il Vecchio to Cosimo III...
, 1515. The artist presented his relief of the Deposition to Charles V at Genoa in 1529; though the relief has been lost, a bronze from it by Antonio Susini in 1600 (Musée du Louvre) shows the decisive inspiration of Donatello's emotional pitch and intensity; Bandinelli made several drawings of the Donatello reliefs, though later in life he disparaged them in a letter to Cosimo I de' Medici.

His sculptures have never inspired the admiration given those of Michelangelo, specially the colossal (5.05 m) marble group of Hercules and Cacus
Hercules and Cacus
The white marble sculpture Hercules and Cacus is to the right of the entrance of the Palazzo Vecchio in the Piazza della Signoria, Florence, Italy....
(completed in 1534) in the Piazza della Signoria
Piazza della Signoria
Piazza della Signoria is an L-shaped square in front of the Palazzo Vecchio in Florence, Italy. It was named after the Palazzo della Signoria, also called Palazzo Vecchio....
, Florence, and Adam and Eve in the Museo Nazionale del Bargello, which both stand within sight of some of Michelangelo's masterworks. Vasari said of him "He did nothing but make bozzetti and finished little", and modern commentators have remarked on the vitality of Bandinelli's terracotta models contrasted with the finished marbles: "all the freshness of his first approach to a subject was lost in the laborious execution in marble... A brilliant draughtsman and excellent small-scale sculptor, he had a morbid fascination for colossi which he was ill-equipped to execute. His failure as a sculptor on a grand scale was accentuated by his desire to imitate Michelangelo."

Hercules and Cacus was commissioned by the Medici
Medici
The House of Medici or Famiglia de' Medici was a political dynasty, banking family and later royal house that first began to gather prominence under Cosimo de' Medici in the Republic of Florence during the late 14th century. The family originated in the Mugello region of the Tuscan countryside,...
pope Clement VII, who had been shown a wax model. The supplied block of Carrara
Carrara
Carrara is a city and comune in the province of Massa-Carrara , notable for the white or blue-grey marble quarried there. It is on the Carrione River, some west-northwest of Florence....
marble was not big enough to execute Bandinelli's wax model. He had to make new wax models, one of which was chosen by the pope as the final draft. Bandinelli had already carved the sculpture as far as the abdomen of Hercules, when during the 1527 Sack of Rome
Sack of Rome
The city of Rome has been sacked on several occasions. Among the most famous:*Battle of the Allia – Rome is sacked by the Gauls after the Battle of the Allia*Sack of Rome – Rome is sacked by Alaric, King of the Visigoths...
, the pope was taken prisoner. Meanwhile, in Florence, republican enemies of the Medici took advantage of the chaos to exile Ippolito de' Medici
Ippolito de' Medici
Ippolito de' Medici was the illegitimate only son of Giuliano di Lorenzo de' Medici.Ippolito was born in Urbino. His father died when he was only five , and he was subsequently raised by his uncle Pope Leo X and his cousin Giulio.When Giulio de' Medici was elected pope as Clement VII, Ippolito...
. Bandinelli, a supporter of the Medici, was also exiled. In 1530 Emperor Charles V
Charles V, Holy Roman Emperor
Charles V was ruler of the Holy Roman Empire from 1519 and, as Charles I, of the Spanish Empire from 1516 until his voluntary retirement and abdication in favor of his younger brother Ferdinand I and his son Philip II in 1556.As...
retook Florence after a long siege. Pope Clement VII subsequently installed his illegitimate son Alessandro de' Medici as duke of Tuscany. Bandinelli then returned to Florence and continue work on the statue till completed in 1534, and transported from the Opera del Duomo to its present marble pedestal
Pedestal
Pedestal is a term generally applied to the support of a statue or a vase....
. But from the moment it was unveiled, it faced ridicule; Cellini
Benvenuto Cellini
Benvenuto Cellini was an Italian goldsmith, sculptor, painter, soldier and musician, who also wrote a famous autobiography. He was one of the most important artists of Mannerism.-Youth:...
compared the ponderous group to 'a sac full of melons'. Afterwards, the Bandinelli tried to sabotage Cellini's career. The statue was restored between February and April 1994.

Bandinelli's drawings, which have in the past masqueraded as Michelangelos in connoisseurs' collections, have come into their own in the later twentieth century.

A youthful portrait by Andrea del Sarto
Andrea del Sarto
Andrea del Sarto was an Italian painter from Florence, whose career flourished during the High Renaissance and early Mannerism. Though highly regarded during his lifetime as an artist senza errori , his renown was eclipsed after his death by that of his contemporaries, Leonardo da Vinci,...
ca 1517 is conserved at the Uffizi
Uffizi
The Uffizi Gallery , is a museum in Florence, Italy. It is one of the oldest and most famous art museums of the Western world.-History:...
.