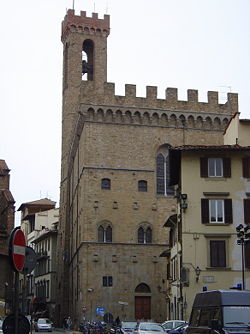 The Bargello, also known as the Bargello Palace or Palazzo del Popolo (Palace of the People) is a former barracks and prison, now an art museum, in Florence
Florence
Florence is the capital city of the Italian region of Tuscany and of the province of Florence. It is the most populous city in Tuscany, with approximately 370,000 inhabitants, expanding to over 1.5 million in the metropolitan area....
, Italy
Italy
Italy , officially the Italian Republic languages]] under the European Charter for Regional or Minority Languages. In each of these, Italy's official name is as follows:;;;;;;;;), is a unitary parliamentary republic in South-Central Europe. To the north it borders France, Switzerland, Austria and...
.

The word "bargello" appears to come from the late Latin
Latin
Latin is an Italic language originally spoken in Latium and Ancient Rome. It, along with most European languages, is a descendant of the ancient Proto-Indo-European language. Although it is considered a dead language, a number of scholars and members of the Christian clergy speak it fluently, and...
bargillus (from Goth
Gothic language
Gothic is an extinct Germanic language that was spoken by the Goths. It is known primarily from the Codex Argenteus, a 6th-century copy of a 4th-century Bible translation, and is the only East Germanic language with a sizable Text corpus...
bargi and German burg), meaning "castle" or "fortified tower". During the Italian Middle Ages
Middle Ages
The Middle Ages is a periodization of European history from the 5th century to the 15th century. The Middle Ages follows the fall of the Western Roman Empire in 476 and precedes the Early Modern Era. It is the middle period of a three-period division of Western history: Classic, Medieval and Modern...
it was the name given to a military captain in charge of keeping peace and justice (hence "Captain of justice") during riots and uproars. In Florence he was usually hired from a foreign city to prevent any appearance of favoritism on the part of the Captain. The position could be compared with that of a current Chief of police. The name Bargello was extended to the building which was the office of the captain. 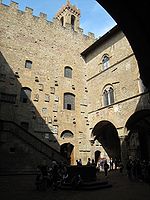 The Bargello palace was built to house first the Capitano del Popolo
Capitano del popolo
The capitano del popolo was an administrative title used in Italy during the Middle Ages.It was created in the early 13th century when the populares, the increasing wealthy classes of merchants, professionals, craftsmen and, in maritime cities, ship-owners, who were of non-noble origin, were able...
and later, in 1261, the 'podestà
Podestà
Podestà is the name given to certain high officials in many Italian cities, since the later Middle Ages, mainly as Chief magistrate of a city state , but also as a local administrator, the representative of the Emperor.The term derives from the Latin word potestas, meaning power...
', the highest magistrate of the Florence City Council
City council
A city council or town council is the legislative body that governs a city, town, municipality or local government area.-Australia & NZ:Because of the differences in legislation between the States, the exact definition of a City Council varies...
. This Palazzo del Podestà, as it was originally called, is the oldest public building in Florence. This austere crenellated building served as model for the construction of the Palazzo Vecchio
Palazzo Vecchio
The Palazzo Vecchio is the town hall of Florence, Italy. This massive, Romanesque, crenellated fortress-palace is among the most impressive town halls of Tuscany...
. In 1574, the Medici
Medici
The House of Medici or Famiglia de' Medici was a political dynasty, banking family and later royal house that first began to gather prominence under Cosimo de' Medici in the Republic of Florence during the late 14th century. The family originated in the Mugello region of the Tuscan countryside,...
dispensed with the function of the Podestà and housed the bargello, the police chief of Florence, in this building, hence its name. It was employed as a prison; executions took place in the Bargello's yard until they were abolished by Grand Duke Peter Leopold
Leopold II, Holy Roman Emperor
Leopold II , born Peter Leopold Joseph Anton Joachim Pius Gotthard, was Holy Roman Emperor and King of Hungary and Bohemia from 1790 to 1792, Archduke of Austria and Grand Duke of Tuscany from 1765 to 1790. He was a son of Emperor Francis I and his wife, Empress Maria Theresa...
in 1780, but it remained the headquarters of the Florentine police until 1859. When Leopold II, Holy Roman Emperor Peter Leopold was exiled, the makeshift Governor of Tuscany decided that the Bargello should no longer be a jail, and it then became a national museum.

The original two-story structure was built alongside the Volognana Tower in 1256. The third story, which can be identified by the smaller blocks used to construct it, was added after the fire of 1323. The building is designed around an open courtyard with an external staircase leading to the second floor. An open well is found in the center of the courtyard. 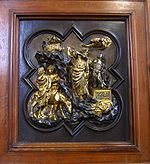 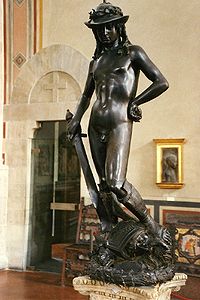 The museum houses masterpieces by Michelangelo
Michelangelo
Michelangelo di Lodovico Buonarroti Simoni , commonly known as Michelangelo, was an Italian Renaissance painter, sculptor, architect, poet, and engineer who exerted an unparalleled influence on the development of Western art...
, such as his Bacchus, Pitti Tondo (or Madonna and Child), Brutus and David-Apollo.

Its collection includes Donatello
Donatello
Donato di Niccolò di Betto Bardi , also known as Donatello, was an early Renaissance Italian artist and sculptor from Florence...
's David and St. George Tabernacle
, Vincenzo Gemito
Vincenzo Gemito
Vincenzo Gemito was an Italian sculptor and artist.Although he worked in various studios of well known artists in his native Naples, Rome and Paris, he is considered to have largely been self-taught, the reason he produced such distinctive works for that time, replacing sentiment with outstanding...
's Pescatore ("fisherboy"), Jacopo Sansovino
Jacopo Sansovino
Jacopo d'Antonio Sansovino was an Italian sculptor and architect, known best for his works around the Piazza San Marco in Venice. Andrea Palladio, in the Preface to his Quattro Libri was of the opinion that Sansovino's Biblioteca Marciana was the best building erected since Antiquity...
's Bacco, Giambologna
Giambologna
Giambologna, born as Jean Boulogne, incorrectly known as Giovanni da Bologna and Giovanni Bologna , was a sculptor, known for his marble and bronze statuary in a late Renaissance or Mannerist style.- Biography :...
's L’Architettura and his Mercurio and many works from the Della Robbia
Della Robbia
Della Robbia may refer to:*Luca della Robbia , Italian sculptor*Andrea della Robbia , Italian sculptor, nephew of Luca*Giovanni della Robbia , son of Andrea*Girolamo della Robbia , son of Andrea...
family. Benvenuto Cellini
Benvenuto Cellini
Benvenuto Cellini was an Italian goldsmith, sculptor, painter, soldier and musician, who also wrote a famous autobiography. He was one of the most important artists of Mannerism.-Youth:...
is represented with his bronze bust of Cosimo I.

The museum also has a fine collection of ceramics (maiolica
Maiolica
Maiolica is Italian tin-glazed pottery dating from the Renaissance. It is decorated in bright colours on a white background, frequently depicting historical and legendary scenes.-Name:...
), textile, tapestries, ivory, silver, armour
Armour
Armour or armor is protective covering used to prevent damage from being inflicted to an object, individual or a vehicle through use of direct contact weapons or projectiles, usually during combat, or from damage caused by a potentially dangerous environment or action...
s and old coins
COinS
ContextObjects in Spans, commonly abbreviated COinS, is a method to embed bibliographic metadata in the HTML code of web pages. This allows bibliographic software to publish machine-readable bibliographic items and client reference management software to retrieve bibliographic metadata. The...
.

It also features the competing designs on Isaac's Sacrifice (Sacrificio di Isacco) that were performed by Lorenzo Ghiberti
Lorenzo Ghiberti
Lorenzo Ghiberti , born Lorenzo di Bartolo, was an Italian artist of the early Renaissance best known for works in sculpture and metalworking.-Early life:...
and Filippo Brunelleschi
Filippo Brunelleschi
Filippo Brunelleschi was one of the foremost architects and engineers of the Italian Renaissance. He is perhaps most famous for inventing linear perspective and designing the dome of the Florence Cathedral, but his accomplishments also included bronze artwork, architecture , mathematics,...
to win the contest for the second set of doors of the Florentine Baptistry
Battistero di San Giovanni (Florence)
The Florence Baptistry or Battistero di San Giovanni is a religious building in Florence , Italy, which has the status of a minor basilica....
(1401).