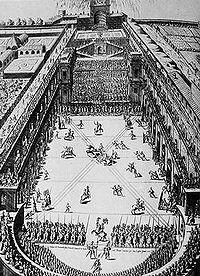 The Cortile del Belvedere, the Belvedere courtyard, designed by Donato Bramante
Donato Bramante
Donato Bramante was an Italian architect, who introduced the Early Renaissance style to Milan and the High Renaissance style to Rome, where his most famous design was St...
from 1506 onwards, was a major architectural work of the High Renaissance
High Renaissance
The expression High Renaissance, in art history, is a periodizing convention used to denote the apogee of the visual arts in the Italian Renaissance...
at the Vatican Palace in Rome
Rome
Rome is the capital of Italy and the country's largest and most populated city and comune, with over 2.7 million residents in . The city is located in the central-western portion of the Italian Peninsula, on the Tiber River within the Lazio region of Italy.Rome's history spans two and a half...
; its concept and details reverberating in courtyard design, formalized piazza
Piazza
A piazza is a city square in Italy, Malta, along the Dalmatian coast and in surrounding regions. The term is roughly equivalent to the Spanish plaza...
s and garden plans throughout Western Europe for centuries. Conceived as a single enclosed space, the long Belvedere court connected the Vatican Palace with the Villa Belvedere in a series of terraces connected by stairs, and was contained on its sides by narrow wings.

Bramante did not see the work completed, and before the end of the sixteenth century it had been irretrievably altered by a building across the court, dividing it into two separate courtyards.

Innocent VIII began construction of the Villa Belvedere on high ground overlooking old St Peter's Basilica, in 1484. Here, where the breezes could tame the Roman summer, he had the Florentine architect Antonio Pollaiuolo
Antonio Pollaiuolo
Antonio del Pollaiolo , also known as Antonio di Jacopo Pollaiuolo or Antonio Pollaiolo, was an Italian painter, sculptor, engraver and goldsmith during the Renaissance.-Biography:...
, design and complete by 1487 a little summerhouse, which also offered spectacular views to the east of central Rome and north to the pastures beyond the Castel Sant'Angelo
Castel Sant'Angelo
The Mausoleum of Hadrian, usually known as the Castel Sant'Angelo, is a towering cylindrical building in Parco Adriano, Rome, Italy. It was initially commissioned by the Roman Emperor Hadrian as a mausoleum for himself and his family...
(the Prati di Castello). This villa suburbana
Villa
A villa was originally an ancient Roman upper-class country house. Since its origins in the Roman villa, the idea and function of a villa have evolved considerably. After the fall of the Roman Republic, villas became small farming compounds, which were increasingly fortified in Late Antiquity,...
was the first pleasure house to be built in Rome since Antiquity.

When Pope Julius II
Pope Julius II
Pope Julius II , nicknamed "The Fearsome Pope" and "The Warrior Pope" , born Giuliano della Rovere, was Pope from 1503 to 1513...
came to the papal throne in 1503, he moved his growing collection of Roman sculpture here, to an enclosed courtyard within the Villa Belvedere itself. The ancient sculpture of Laocoön and His Sons
Laocoön and his Sons
The statue of Laocoön and His Sons , also called the Laocoön Group, is a monumental sculpture in marble now in the Vatican Museums, Rome. The statue is attributed by the Roman author Pliny the Elder to three sculptors from the island of Rhodes: Agesander, Athenodoros and Polydorus...
was, soon after its discovery, purchased by Julius and brought here by 1506. Shortly after, the statue of Apollo was also added to the collection, henceforth to be known as the Apollo Belvedere
Apollo Belvedere
The Apollo Belvedere or Apollo of the Belvedere—also called the Pythian Apollo— is a celebrated marble sculpture from Classical Antiquity. It was rediscovered in central Italy in the late 15th century, during the Renaissance...
, as was the heroic male torso known as the Belvedere Torso
Belvedere Torso
The Belvedere Torso is a fragment of a nude male statue, signed prominently on the front of the base by an Athenian sculptor "Apollonios son of Nestor", who is unmentioned in ancient literature...
.

Julius commissioned Bramante to link the Vatican Palace with the Villa Belvedere. Bramante's design is commemorated in a fresco at the Castel Sant'Angelo
Castel Sant'Angelo
The Mausoleum of Hadrian, usually known as the Castel Sant'Angelo, is a towering cylindrical building in Parco Adriano, Rome, Italy. It was initially commissioned by the Roman Emperor Hadrian as a mausoleum for himself and his family...
; he regularized the slope as a set of terraces, linked by rigorously symmetrical stairs on the central longitudinal axis, to create a sequence of formal spaces that was unparalleled in Europe, both in its scale and in its architectural unity.

A series of six narrow terraces at the base was traversed by a monumental central stair leading to the wide middle terrace. The divided stair to the uppermost terrace, with flights running on either side against the retaining wall to a landing and returning towards the center, was another innovation by Bramante. His long corridor-like wings that enclose the Cortile now house the Vatican Museums collections. One of the wings accommodated the Vatican Library. The wings have three storeys in the lower court and end in a single one enclosing the uppermost terrace.

The whole visual scenography culminated in the semicircular exedra
Exedra
In architecture, an exedra is a semicircular recess or plinth, often crowned by a semi-dome, which is sometimes set into a building's facade. The original Greek sense was applied to a room that opened onto a stoa, ringed with curved high-backed stone benches, a suitable place for a philosophical...
at the Villa Belvedere end of the court. This was set into a screening wall devised by Bramante to disguise the fact the villa facade was not parallel to the facing Vatican Palace facade at the other end. The entire perpectivised ensemble was designed to be best seen from Raphael's Stanze
Raphael Rooms
The four Stanze di Raffaello in the Palace of the Vatican form a suite of reception rooms, the public part of the papal apartments. They are famous for their frescoes, painted by Raphael and his workshop...
in the papal apartments of the palace.

Shortly after, the court was home to the papal menagerie. It was on the lower part of the courtyard that Pope Leo X
Pope Leo X
Pope Leo X , born Giovanni di Lorenzo de' Medici, was the Pope from 1513 to his death in 1521. He was the last non-priest to be elected Pope. He is known for granting indulgences for those who donated to reconstruct St. Peter's Basilica and his challenging of Martin Luther's 95 Theses...
would parade his prized elephant Hanno
Hanno (elephant)
Hanno was the pet white elephant given by King Manuel I of Portugal to Pope Leo X at his coronation. Hanno, actually an Asian elephant, came to Rome in 1514 with the Portuguese ambassador Tristão da Cunha and quickly became the Pope's favorite animal...
for adoring crowds to see. Because of the pachyderm's glorious history he was buried in the Cortile del Belvedere.

The court was incomplete when Bramante died in 1514. It was finished by Pirro Ligorio
Pirro Ligorio
Pirro Ligorio was an Italian architect, painter, antiquarian and garden designer.-Biography:Ligorio was born in Naples. In 1534 he moved to Rome, where he developed his interest in antiquities, and was named superintendent to the ancient monuments by the Popes Pius IV and Paul IV...
for Pius IV in 1562–65. To the great open-headed exedra
Exedra
In architecture, an exedra is a semicircular recess or plinth, often crowned by a semi-dome, which is sometimes set into a building's facade. The original Greek sense was applied to a room that opened onto a stoa, ringed with curved high-backed stone benches, a suitable place for a philosophical...
at the far end of the uppermost terrace, Ligorio added a third storey, enclosing the central space with a vast half-dome to form the largest niche
Niche (architecture)
A niche in classical architecture is an exedra or an apse that has been reduced in size, retaining the half-dome heading usual for an apse. Nero's Domus Aurea was the first semi-private dwelling that possessed rooms that were given richly varied floor plans, shaped with niches and exedras;...
that had been erected since Antiquity
Classical antiquity
Classical antiquity is a broad term for a long period of cultural history centered on the Mediterranean Sea, comprising the interlocking civilizations of ancient Greece and ancient Rome, collectively known as the Greco-Roman world...
— the nicchione visible today from several elevated outlooks around Rome (illustration). He completed his structure with an uppermost loggia that repeated the hemicycle of the niche and took its cue from scholarly reconstructions of the ancient sanctuary dedicated to Fortuna Primigenia
Fortuna
Fortuna can mean:*Fortuna, the Roman goddess of luck -Geographical:*19 Fortuna, asteroid*Fortuna, California, town located on the north coast of California*Fortuna, United States Virgin Islands...
at Praeneste, south of Rome.

The lowest, and largest level of the court was not planted. It was cobbled and paved with a saltire of stones laid corner to corner; it had semi-permanent bleachers set against the Vatican walls and was used for outdoor entertainments, pageants and carousels such as the festive early 17th-century joust depicted in a http://www.italica.rai.it/rinascimento/iconografia/prot_1918.htm painting in Museo di Roma, Palazzo Braschi
Palazzo Braschi
Palazzo Braschi is a large Neoclassical palace in Rome, Italy and is located between the Piazza Navona, the Campo de' Fiori, the Corso Vittorio Emanuele II and the Piazza di Pasquino. It presently houses the Museo di Roma, the civic museum of Rome....
]. The upper two levels were laid out with of patterned parterres that the Italians referred to as compartimenti, set in wide gravelled walkways. The four sections (now grassed) of the upper courtyard have the same pattern that appears in 16th century engravings.

Sixtus V
Pope Sixtus V
Pope Sixtus V , born Felice Peretti di Montalto, was Pope from 1585 to 1590.-Early life:The chronicler Andrija Zmajević states that Felice's family originated from modern-day Montenegro...
spoiled the unity of the Cortile (1585–90) by erecting a wing of the Vatican Library, which occupies the former middle terrace and bisects the space. James Ackerman has suggested that the move was a conscious one, designed to screen the secular, even pagan nature of the Cortile and the collection of sculptures that Pope Adrian VI
Pope Adrian VI
Pope Adrian VI , born Adriaan Florenszoon Boeyens, served as Pope from 9 January 1522 until his death some 18 months later...
had referred to as "idols
Cult image
In the practice of religion, a cult image is a human-made object that is venerated for the deity, spirit or daemon that it embodies or represents...
". Today the lowest terrace is still called the Cortile del Belvedere, but the separated upper terrace is called the Cortile della Pigna
Pigna (rione of Rome)
Pigna is the name of rione IX of Rome. The name means "pine cone" in Italian, and the symbol for the rione is the colossal bronze pine cone, the Pigna, which decorated a fountain in Ancient Rome next to a vast Temple of Isis. There water flowed copiously from the top of the pinecone. The Pigna...
because of the large Roman bronze pinecone, once a fountain, positioned in front of the niche.