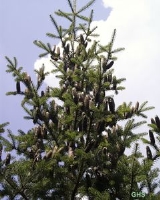 Encyclopedia
The balsam fir is a North America
North America
North America is a continent wholly within the Northern Hemisphere and almost wholly within the Western Hemisphere. It is also considered a northern subcontinent of the Americas...
n fir
Fir
Firs are a genus of 48–55 species of evergreen conifers in the family Pinaceae. They are found through much of North and Central America, Europe, Asia, and North Africa, occurring in mountains over most of the range...
, native to most of eastern and central Canada
Canada
Canada is a North American country consisting of ten provinces and three territories. Located in the northern part of the continent, it extends from the Atlantic Ocean in the east to the Pacific Ocean in the west, and northward into the Arctic Ocean...
(Newfoundland west to central Alberta
Alberta
Alberta is a province of Canada. It had an estimated population of 3.7 million in 2010 making it the most populous of Canada's three prairie provinces...
) and the northeastern United States
United States
The United States of America is a federal constitutional republic comprising fifty states and a federal district...
(Minnesota
Minnesota
Minnesota is a U.S. state located in the Midwestern United States. The twelfth largest state of the U.S., it is the twenty-first most populous, with 5.3 million residents. Minnesota was carved out of the eastern half of the Minnesota Territory and admitted to the Union as the thirty-second state...
east to Maine
Maine
Maine is a state in the New England region of the northeastern United States, bordered by the Atlantic Ocean to the east and south, New Hampshire to the west, and the Canadian provinces of Quebec to the northwest and New Brunswick to the northeast. Maine is both the northernmost and easternmost...
, and south in the Appalachian Mountains
Appalachian Mountains
The Appalachian Mountains #Whether the stressed vowel is or ,#Whether the "ch" is pronounced as a fricative or an affricate , and#Whether the final vowel is the monophthong or the diphthong .), often called the Appalachians, are a system of mountains in eastern North America. The Appalachians...
to West Virginia
West Virginia
West Virginia is a state in the Appalachian and Southeastern regions of the United States, bordered by Virginia to the southeast, Kentucky to the southwest, Ohio to the northwest, Pennsylvania to the northeast and Maryland to the east...
).

It is a small to medium-size evergreen
Evergreen
In botany, an evergreen plant is a plant that has leaves in all seasons. This contrasts with deciduous plants, which completely lose their foliage during the winter or dry season.There are many different kinds of evergreen plants, both trees and shrubs...
tree
Tree
A tree is a perennial woody plant. It is most often defined as a woody plant that has many secondary branches supported clear of the ground on a single main stem or trunk with clear apical dominance. A minimum height specification at maturity is cited by some authors, varying from 3 m to...
typically 14–20 m (45.9–65.6 ) tall, rarely to 27 metres (88.6 ft) tall, with a narrow conic crown. The bark
Bark
Bark is the outermost layers of stems and roots of woody plants. Plants with bark include trees, woody vines and shrubs. Bark refers to all the tissues outside of the vascular cambium and is a nontechnical term. It overlays the wood and consists of the inner bark and the outer bark. The inner...
on young trees is smooth, grey, and with resin
Resin
Resin in the most specific use of the term is a hydrocarbon secretion of many plants, particularly coniferous trees. Resins are valued for their chemical properties and associated uses, such as the production of varnishes, adhesives, and food glazing agents; as an important source of raw materials...
blisters (which tend to spray when ruptured), becoming rough and fissured or scaly on old trees. The leaves
Leaf
A leaf is an organ of a vascular plant, as defined in botanical terms, and in particular in plant morphology. Foliage is a mass noun that refers to leaves as a feature of plants....
are flat needle-like, 15 to 30 millimetres (½–1 in) long, dark green above often with a small patch of stomata near the tip, and two white stomatal bands below, and a slightly notched tip. They are arranged spirally on the shoot, but with the leaf bases twisted to appear in two more-or-less horizontal rows. The cones
Conifer cone
A cone is an organ on plants in the division Pinophyta that contains the reproductive structures. The familiar woody cone is the female cone, which produces seeds. The male cones, which produce pollen, are usually herbaceous and much less conspicuous even at full maturity...
are erect, 40 to 80 millimetres (1½–3 in) long, dark purple, ripening brown and disintegrating to release the winged seed
Seed
A seed is a small embryonic plant enclosed in a covering called the seed coat, usually with some stored food. It is the product of the ripened ovule of gymnosperm and angiosperm plants which occurs after fertilization and some growth within the mother plant...
s in September.

There are two varieties:

On mountain tops, stands of balsam fir occasionally develop fir wave
Fir wave
A fir wave is a set of alternating bands of fir trees in sequential stages of development, observed in forests on exposed mountain slopes in several areas, including northeastern North America and Japan...
s. Often found in association with black spruce
Black Spruce
Picea mariana is a species of spruce native to northern North America, from Newfoundland west to Alaska, and south to northern New York, Minnesota and central British Columbia...
, white spruce
White Spruce
Picea glauca is a species of spruce native to boreal forests in the north of North America, from central Alaska east to Newfoundland, and south to northern Montana, Minnesota, Wisconsin, Michigan, upstate New York, Vermont, New Hampshire, and Maine; there is also an isolated population in the...
and trembling aspen
Aspen
Populus section Populus, of the Populus genus, includes the aspen trees and the white poplar Populus alba. The five typical aspens are all native to cold regions with cool summers, in the north of the Northern Hemisphere, extending south at high altitudes in the mountains. The White Poplar, by...
.

This tree provides food for moose, American red squirrel
American Red Squirrel
The American Red Squirrel is one of three species of tree squirrel currently classified in the genus Tamiasciurus and known as pine squirrels...
s, crossbill
Crossbill
The crossbill is a bird in the finch family . The three to five species are all classified in the genus Loxia. These birds are characterised by the mandibles crossing at their tips, which gives the group its English name...
s and chickadee
Titmouse
The tits, chickadees, and titmice constitute Paridae, a large family of small passerine birds which occur in the northern hemisphere and Africa...
s, as well as shelter for moose, snowshoe hares
Snowshoe Hare
The Snowshoe Hare , also called the Varying Hare, or Snowshoe Rabbit, is a species of hare found in North America. It has the name "snowshoe" because of the large size of its hind feet and the marks its tail leaves. The animal's feet prevent it from sinking into the snow when it hops and walks...
, white-tailed deer
White-tailed Deer
The white-tailed deer , also known as the Virginia deer or simply as the whitetail, is a medium-sized deer native to the United States , Canada, Mexico, Central America, and South America as far south as Peru...
, ruffed grouse
Ruffed Grouse
The Ruffed Grouse is a medium-sized grouse occurring in forests from the Appalachian Mountains across Canada to Alaska. It is non-migratory.The Ruffed Grouse is frequently referred to as a "partridge"...
and other small mammals and songbirds. The needles are eaten by some lepidoptera
Lepidoptera
Lepidoptera is a large order of insects that includes moths and butterflies . It is one of the most widespread and widely recognizable insect orders in the world, encompassing moths and the three superfamilies of butterflies, skipper butterflies, and moth-butterflies...
n caterpillars, for example the Io moth (Automeris io).

Both varieties of the species are very popular as Christmas trees, particularly in the northeastern United states. The resin
Resin
Resin in the most specific use of the term is a hydrocarbon secretion of many plants, particularly coniferous trees. Resins are valued for their chemical properties and associated uses, such as the production of varnishes, adhesives, and food glazing agents; as an important source of raw materials...
is used to produce Canada balsam
Canada balsam
Canada balsam, also called Canada turpentine or balsam of fir, is a turpentine which is made from the resin of the balsam fir tree of boreal North America...
, and was traditionally used as a cold
Common cold
The common cold is a viral infectious disease of the upper respiratory system, caused primarily by rhinoviruses and coronaviruses. Common symptoms include a cough, sore throat, runny nose, and fever...
remedy and as a glue
Glue
This is a list of various types of glue. Historically, the term "glue" only referred to protein colloids prepared from animal flesh. The meaning has been extended to refer to any fluid adhesive....
for glasses, optical instrument components, and for preparing permanent mounts of microscope specimens. The wood
Wood
Wood is a hard, fibrous tissue found in many trees. It has been used for hundreds of thousands of years for both fuel and as a construction material. It is an organic material, a natural composite of cellulose fibers embedded in a matrix of lignin which resists compression...
is milled for framing lumber, siding and pulped for paper
Paper
Paper is a thin material mainly used for writing upon, printing upon, drawing or for packaging. It is produced by pressing together moist fibers, typically cellulose pulp derived from wood, rags or grasses, and drying them into flexible sheets....
manufacture. Balsam fir oil is an EPA approved nontoxic rodent repellent. The balsam fir is also used as an air freshener
Air freshener
Air fresheners are consumer products used in homes or commercial products used in restrooms that typically emit fragrance. There are two broad air freshener categories: continuous action and instant action...
and as incense
Incense
Incense is composed of aromatic biotic materials, which release fragrant smoke when burned. The term "incense" refers to the substance itself, rather than to the odor that it produces. It is used in religious ceremonies, ritual purification, aromatherapy, meditation, for creating a mood, and for...
.