Will black spruce trees grow in prairie soil which is alkaline. If not what fir trees will grow in this type of soil
More 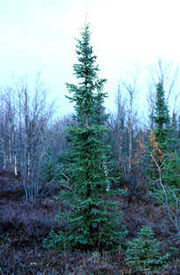 Picea mariana is a slow-growing, small upright evergreen
Evergreen
In botany, an evergreen plant is a plant that has leaves in all seasons. This contrasts with deciduous plants, which completely lose their foliage during the winter or dry season.There are many different kinds of evergreen plants, both trees and shrubs...
coniferous
Pinophyta
The conifers, division Pinophyta, also known as division Coniferophyta or Coniferae, are one of 13 or 14 division level taxa within the Kingdom Plantae. Pinophytes are gymnosperms. They are cone-bearing seed plants with vascular tissue; all extant conifers are woody plants, the great majority being...
tree
Tree
A tree is a perennial woody plant. It is most often defined as a woody plant that has many secondary branches supported clear of the ground on a single main stem or trunk with clear apical dominance. A minimum height specification at maturity is cited by some authors, varying from 3 m to...
(rarely a shrub
Shrub
A shrub or bush is distinguished from a tree by its multiple stems and shorter height, usually under 5–6 m tall. A large number of plants may become either shrubs or trees, depending on the growing conditions they experience...
), having a straight trunk with little taper, a scruffy habit, and a narrow, pointed crown of short, compact, drooping branches with upturned tips. Through much of its range it averages 5–15 m tall with a trunk 15-50 cm diameter at maturity, though occasional specimens can reach 30 m tall and 60 cm diameter. The bark
Bark
Bark is the outermost layers of stems and roots of woody plants. Plants with bark include trees, woody vines and shrubs. Bark refers to all the tissues outside of the vascular cambium and is a nontechnical term. It overlays the wood and consists of the inner bark and the outer bark. The inner...
is thin, scaly, and grayish brown. The leaves
Leaf
A leaf is an organ of a vascular plant, as defined in botanical terms, and in particular in plant morphology. Foliage is a mass noun that refers to leaves as a feature of plants....
are needle-like, 6-15 mm long, stiff, four-sided, dark bluish green on the upper sides, paler glaucous green below. The cones
Conifer cone
A cone is an organ on plants in the division Pinophyta that contains the reproductive structures. The familiar woody cone is the female cone, which produces seeds. The male cones, which produce pollen, are usually herbaceous and much less conspicuous even at full maturity...
are the smallest of all of the spruces, 1.5-4 cm long and 1–2 cm broad, spindle-shaped to nearly round, dark purple ripening red-brown, produced in dense clusters in the upper crown, opening at maturity but persisting for several years.

It differs from Picea glauca (White Spruce) in having a dense cover of small hairs on the bark of young branch tips, an often darker reddish-brown bark, shorter needles, smaller and rounder cones, and a preference for wetter lowland areas. Numerous differences in details of its needle and pollen morphology also exist but require careful microscopic examination. From true fir
Fir
Firs are a genus of 48–55 species of evergreen conifers in the family Pinaceae. They are found through much of North and Central America, Europe, Asia, and North Africa, occurring in mountains over most of the range...
s, such as Abies balsamea (Balsam Fir
Balsam Fir
The balsam fir is a North American fir, native to most of eastern and central Canada and the northeastern United States .-Growth:It is a small to medium-size evergreen tree typically tall, rarely to tall, with a narrow conic crown...
), it differs in having pendulous cones, persistent woody leaf-bases, and four-angled needles, arranged all round the shoots.

Growth varies with site quality. In swamp and muskeg
Muskeg
Muskeg is an acidic soil type common in Arctic and boreal areas, although it is found in other northern climates as well. Muskeg is approximately synonymous with bogland but muskeg is the standard term in Western Canada and Alaska, while 'bog' is common elsewhere. The term is of Cree origin, maskek...
it shows progressively slower growth rates from the edges toward the centre. The roots are shallow and wide spreading with fallen trees are colloquially called "drunken trees
Drunken trees
Drunken trees, tilted trees, or a drunken forest, is a stand of trees displaced from their normal vertical alignment.This most commonly occurs in northern subarctic taiga forests of Black Spruce under which discontinuous permafrost or ice wedges have melted, causing trees to tilt at various...
", and are often associated with thawing of permafrost
Permafrost
In geology, permafrost, cryotic soil or permafrost soil is soil at or below the freezing point of water for two or more years. Ice is not always present, as may be in the case of nonporous bedrock, but it frequently occurs and it may be in amounts exceeding the potential hydraulic saturation of...
. In the northern part of its range, ice pruned
Ice pruning
Ice pruning is the natural process of selective vegetative pruning on the windward side of a plant, executed by the impact of ice and snow particles driven by wind. The process is sometimes termed snow pruning...
asymmetric Black Spruce are often seen, with diminished foliage on the windward side.

In the southern portion of range it is found primarily on wet organic soils, but farther north its abundance on uplands increases. In the Great Lakes
Great Lakes
The Great Lakes are a collection of freshwater lakes located in northeastern North America, on the Canada – United States border. Consisting of Lakes Superior, Michigan, Huron, Erie, and Ontario, they form the largest group of freshwater lakes on Earth by total surface, coming in second by volume...
States it is most abundant in peat bogs and swamps, also on transitional sites between peatlands and uplands. In these areas it is rare on uplands, except in isolated areas of northern Minnesota and the Upper Peninsula of Michigan
Michigan
Michigan is a U.S. state located in the Great Lakes Region of the United States of America. The name Michigan is the French form of the Ojibwa word mishigamaa, meaning "large water" or "large lake"....
.

Most stands are even-aged due to frequent fire intervals in Black Spruce
Black Spruce
Picea mariana is a species of spruce native to northern North America, from Newfoundland west to Alaska, and south to northern New York, Minnesota and central British Columbia...
forests. It commonly grows in pure stands on organic soils and in mixed stands on mineral soils. It is tolerant of nutrient-poor soils, and is commonly found on poorly drained acidic peatlands. It is considered a climax species over most of its range. However, some ecologists question whether Black Spruce forests truly attain climax because fires usually occur at 50-150 year intervals, while "stable" conditions may not be attained for several hundred years.

The frequent fire return interval, a natural fire ecology
Fire ecology
Fire ecology is concerned with the processes linking the natural incidence of fire in an ecosystem and the ecological effects of this fire. Many ecosystems, such as the North American prairie and chaparral ecosystems, and the South African savanna, have evolved with fire as a natural and necessary...
, perpetuates numerous successional communities. Throughout boreal North America, Paper Birch
Paper Birch
Betula papyrifera is a species of birch native to northern North America.-Description:...
Betula papyrifera and Quaking Aspen
Aspen
Populus section Populus, of the Populus genus, includes the aspen trees and the white poplar Populus alba. The five typical aspens are all native to cold regions with cool summers, in the north of the Northern Hemisphere, extending south at high altitudes in the mountains. The White Poplar, by...
Populus tremuloides are successional hardwoods that frequently invade burns in Black Spruce. Black Spruce typically seeds in promptly after fire, and with the continued absence of fire, will eventually dominate the hardwoods.

It is a pioneer that invades the sedge mat in filled-lake bogs, though often preceded slightly by Tamarack Larch
Tamarack Larch
Tamarack Larch, or Tamarack, or Hackmatack, or American Larch is a species of larch native to Canada, from eastern Yukon and Inuvik, Northwest Territories east to Newfoundland, and also south into the northeastern United States from Minnesota to Cranesville Swamp, West Virginia; there is also a...
, Larix laricina, with which it may in time form a stable forest cover in swamps. However, as the peat soil is gradually elevated by the accumulation of organic matter, and the fertility of the site improves, Balsam Fir and Eastern Arborvitae Thuja occidentalis will eventually replace Black Spruce and Tamarack.

The larvae of the Spruce Budworm
Spruce Budworm
Spruce budworms and relatives are a group of closely related insects in the genus Choristoneura. Most are serious pests of conifers. There are nearly a dozen Choristoneura species, subspecies, or forms, with a complexity of variation among populations found throughout much of the United States and...
moth
Moth
A moth is an insect closely related to the butterfly, both being of the order Lepidoptera. Moths form the majority of this order; there are thought to be 150,000 to 250,000 different species of moth , with thousands of species yet to be described...
cause defoliation and if it occurs several years in a row will lead to death, though Black Spruce is less susceptible than White Spruce or Balsam Fir. Trees most at risk are those growing with Balsam Fir and White Spruce.

The wood
Wood
Wood is a hard, fibrous tissue found in many trees. It has been used for hundreds of thousands of years for both fuel and as a construction material. It is an organic material, a natural composite of cellulose fibers embedded in a matrix of lignin which resists compression...
is of low value due to the small size of the trees, but is used for pulp and paper making.
The source of this article is wikipedia, the free encyclopedia.  The text of this article is licensed under the GFDL.