Napoleon Bonaparte
Napoleon I of France
Napoleon Bonaparte was a French military and political leader during the latter stages of the French Revolution.As Napoleon I, he was Emperor of the French from 1804 to 1815...
founded the Kingdom of Westphalia
Kingdom of Westphalia
The Kingdom of Westphalia was a new country of 2.6 million Germans that existed from 1807-1813. It included of territory in Hesse and other parts of present-day Germany. While formally independent, it was a vassal state of the First French Empire, ruled by Napoleon's brother Jérôme Bonaparte...
, which was a client state
Client state
Client state is one of several terms used to describe the economic, political and/or military subordination of one state to a more powerful state in international affairs...
of the First French Empire
First French Empire
The First French Empire , also known as the Greater French Empire or Napoleonic Empire, was the empire of Napoleon I of France...
from 1807 to 1813. This state shared only the name with the historical region, containing mostly Hessian
Hesse
Hesse or Hessia is both a cultural region of Germany and the name of an individual German state.* The cultural region of Hesse includes both the State of Hesse and the area known as Rhenish Hesse in the neighbouring Rhineland-Palatinate state...
and Eastphalia
Eastphalia
Eastphalia is a historical region in northern Germany, encompassing the eastern part of the historic Duchy of Saxony, between the Elbe, Leine, Saale and Unstrut rivers. Today, it covers the southeastern part of the state of Lower Saxony and the western part of Saxony-Anhalt.-Etymology:The name...
n regions and only a relatively small part of the region of Westphalia
Westphalia
Westphalia is a region in Germany, centred on the cities of Arnsberg, Bielefeld, Dortmund, Minden and Münster.Westphalia is roughly the region between the rivers Rhine and Weser, located north and south of the Ruhr River. No exact definition of borders can be given, because the name "Westphalia"...
.

Although Prussia had long owned territory in Westphalia, King Frederick William III
Frederick William III of Prussia
Frederick William III was king of Prussia from 1797 to 1840. He was in personal union the sovereign prince of the Principality of Neuchâtel .-Early life:...
had preferred to incorporate the Kingdom of Saxony
Kingdom of Saxony
The Kingdom of Saxony , lasting between 1806 and 1918, was an independent member of a number of historical confederacies in Napoleonic through post-Napoleonic Germany. From 1871 it was part of the German Empire. It became a Free state in the era of Weimar Republic in 1918 after the end of World War...
first. It was not until the Congress of Vienna
Congress of Vienna
The Congress of Vienna was a conference of ambassadors of European states chaired by Klemens Wenzel von Metternich, and held in Vienna from September, 1814 to June, 1815. The objective of the Congress was to settle the many issues arising from the French Revolutionary Wars, the Napoleonic Wars,...
in 1815 that the Province of Westphalia came into being. The province was formed from several territories:

In 1816, the district of Essen
Essen
- Origin of the name :In German-speaking countries, the name of the city Essen often causes confusion as to its origins, because it is commonly known as the German infinitive of the verb for the act of eating, and/or the German noun for food. Although scholars still dispute the interpretation of...
was transferred to the Rhine Province
Rhine Province
The Rhine Province , also known as Rhenish Prussia or synonymous to the Rhineland , was the westernmost province of the Kingdom of Prussia and the Free State of Prussia, within the German Reich, from 1822-1946. It was created from the provinces of the Lower Rhine and Jülich-Cleves-Berg...
.

After the end of World War II
World War II
World War II, or the Second World War , was a global conflict lasting from 1939 to 1945, involving most of the world's nations—including all of the great powers—eventually forming two opposing military alliances: the Allies and the Axis...
, the province was merged with the northern half of the Rhine Province to form the German
Germany
Germany , officially the Federal Republic of Germany , is a federal parliamentary republic in Europe. The country consists of 16 states while the capital and largest city is Berlin. Germany covers an area of 357,021 km2 and has a largely temperate seasonal climate...
state
States of Germany
Germany is made up of sixteen which are partly sovereign constituent states of the Federal Republic of Germany. Land literally translates as "country", and constitutionally speaking, they are constituent countries...
of North Rhine-Westphalia
North Rhine-Westphalia
North Rhine-Westphalia is the most populous state of Germany, with four of the country's ten largest cities. The state was formed in 1946 as a merger of the northern Rhineland and Westphalia, both formerly part of Prussia. Its capital is Düsseldorf. The state is currently run by a coalition of the...
in 1946, with the addition of the former state of Lippe
Lippe
Lippe is a Kreis in the east of North Rhine-Westphalia, Germany. Neighboring districts are Herford, Minden-Lübbecke, Höxter, Paderborn, Gütersloh, and district-free Bielefeld, which forms the region Ostwestfalen-Lippe....
in 1947. 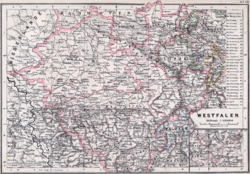