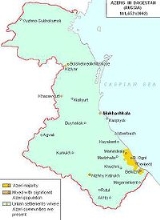 111,656 Azeris lived in the Dagestan Republic as of 2002, which makes them the region's seventh largest ethnic group. Most of them are natives of the city of Derbent
Derbent
Derbent |Lak]]: Чурул, Churul; Persian: دربند; Judæo-Tat: דארבּאנד/Дэрбэнд/Dərbənd) is a city in the Republic of Dagestan, Russia, close to the Azerbaijani border. It is the southernmost city in Russia, and it is the second most important city of Dagestan...
living in the historical quarter Mahal and making up about ⅓ of the city's population. Azeris constitute 55% of the population of the Derbent rayon (over twenty towns and villages), 18% of that of the Tabasaran rayon (villages of Maraga, Tsanak, Kheli-Pendzhi, Yersi, Zil, Arak, Darvag, and Yekrakh), 4% in the Rutul rayon (village of Nizhny Katrukh) and 3% in the Kizlyar rayon (villages of Bolshebredikhinskoye and Persidskoye). The rest live in the cities of Makhachkala
Makhachkala
-Twin towns/sister cities:Makhachkala is twinned with: Sfax, Tunisia Siping, China Spokane, United States Vladikavkaz, Russia Yalova, Turkey Ndola, Zambia-See also:*...
, Khasavyurt
Khasavyurt
Khasavyurt is a city in the Republic of Dagestan, Russia. Population: It was founded in 1846 and granted town status in 1931. The main local industries are food processing, brick making and garment making....
, Buynaksk
Buynaksk
Buynaksk is a town in the Republic of Dagestan, Russia, located at the foothills of the Greater Caucasus on the Shura-Ozen River, southwest of the republic's capital Makhachkala. Population: 40,000 ....
and Kizlyar
Kizlyar
Kizlyar is a town in the Republic of Dagestan, Russia, located in the delta of the Terek River northwest of Makhachkala. Population: 30,000 ....
. Among cultural benefits, available to Dagestani Azeris, there are newspapers and magazines printed in the Azeri language
Azerbaijani language
Azerbaijani or Azeri or Torki is a language belonging to the Turkic language family, spoken in southwestern Asia by the Azerbaijani people, primarily in Azerbaijan and northwestern Iran...
, public schools where Azeri is taught as a first language, and the Azeri State Dramatic Theater in Derbent. Traditionally Azeris of Dagestan were engaged in carpet weaving, currying, jewellery- and copper utensils making. Starting from the 1920s, the industrialization era opened new career opportunities for Dagestanis. 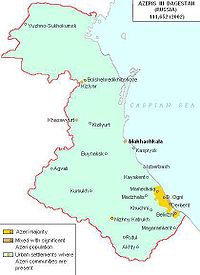 While the majority of Dagestani Azeris descend from the native population of the region, a portion of them (mostly the city-dwellers) come from families, which immigrated to Dagestan from Iran
Iran
Iran , officially the Islamic Republic of Iran , is a country in Southern and Western Asia. The name "Iran" has been in use natively since the Sassanian era and came into use internationally in 1935, before which the country was known to the Western world as Persia...
in the 19th century (they were registered as Persians
Persian people
The Persian people are part of the Iranian peoples who speak the modern Persian language and closely akin Iranian dialects and languages. The origin of the ethnic Iranian/Persian peoples are traced to the Ancient Iranian peoples, who were part of the ancient Indo-Iranians and themselves part of...
in the early Soviet censūs). These families were subject to deportation in the 1930s, as were all those who retained foreign citizenship while living in the USSR on a permanent basis. Azeris in Dagestan are mostly Shia Muslims, however similarly to those of Azeris in Azerbaijan
Azerbaijan
Azerbaijan , officially the Republic of Azerbaijan is the largest country in the Caucasus region of Eurasia. Located at the crossroads of Western Asia and Eastern Europe, it is bounded by the Caspian Sea to the east, Russia to the north, Georgia to the northwest, Armenia to the west, and Iran to...
, their religious beliefs are influenced by old pagan traditions.

For centuries Azeri has been the lingua franca
Lingua franca
A lingua franca is a language systematically used to make communication possible between people not sharing a mother tongue, in particular when it is a third language, distinct from both mother tongues.-Characteristics:"Lingua franca" is a functionally defined term, independent of the linguistic...
of Southern Dagestan. It managed to retain that status till nowadays, despite huge competition with Russian
Russian language
Russian is a Slavic language used primarily in Russia, Belarus, Uzbekistan, Kazakhstan, Tajikistan and Kyrgyzstan. It is an unofficial but widely spoken language in Ukraine, Moldova, Latvia, Turkmenistan and Estonia and, to a lesser extent, the other countries that were once constituent republics...
in the past 50 years.

For the past decade, Azeris have played significant roles in developing the Russian economy. With many of them being involved in entrepreneurship
Entrepreneurship
Entrepreneurship is the act of being an entrepreneur, which can be defined as "one who undertakes innovations, finance and business acumen in an effort to transform innovations into economic goods". This may result in new organizations or may be part of revitalizing mature organizations in response...
, they have been employed in major economical areas, such as trade and oil industry. Among Russia's 100 richest people ranked by the Forbes
Forbes
Forbes is an American publishing and media company. Its flagship publication, the Forbes magazine, is published biweekly. Its primary competitors in the national business magazine category are Fortune, which is also published biweekly, and Business Week...
in 2004, 3 ethnic Azeris were ranked 10, 66 and 74.

Azeris have established numerous cultural communities, the largest one being the All-Russian Azeri Congress, which controls smaller communities throughout Russia. In addition, the Moscow Public Secondary School #157 is set up for students with keen interest in the Azeri language and culture.

Among ethnic Caucasus diasporas in Moscow, Azeris stand out as the least integrated into Russian society and constitute about 1% of the city's population. They have been described as the strongest adherents to their traditions and marriages within their own ethnic community compared to local Armenians, Georgians, Ukrainians, and Tatars. According to a 2006 survey, 71% of Moscow Azeris described themselves as being religious. A great number of them has retained Azerbaijani citizenship and is willing to relocate back to Azerbaijan at some point.

A 2005 study indicated noticeable social differences between the Azeris who are native to or lived considerable parts of their lives in Moscow and the Azeris who are recent immigrants. About half of the people in the first group have a post-secondary degree, whereas among immigrant Azeris only 25% do. Fluency in the Russian language is characteristic of virtually all of those in the first group (moreover, 24% of Azeris from this group showed it as their first language), while almost one-third of those in the second group speak very limited Russian. About half of Azeri newcomers are engaged in commerce and service sector, compared to the native and earlier immigrant Azeris who tend to pursue careers in sciences, health care, education and the arts.

Like many other people, who originated in the Caucasus
Caucasus
The Caucasus, also Caucas or Caucasia , is a geopolitical region at the border of Europe and Asia, and situated between the Black and the Caspian sea...
(commonly referred to as Caucasians (кавказцы), despite the fact that the term has a different dominant meaning in English
English language
English is a West Germanic language that arose in the Anglo-Saxon kingdoms of England and spread into what was to become south-east Scotland under the influence of the Anglian medieval kingdom of Northumbria...
), Azeris often face Caucasophobia, which might result in severe discrimination and violence.