Encyclopedia
Rostov Oblast is a federal subject
Federal subjects of Russia
Russia is a federation which, since March 1, 2008, consists of 83 federal subjects . In 1993, when the Constitution was adopted, there were 89 federal subjects listed...
of Russia
Russia
Russia or , officially known as both Russia and the Russian Federation , is a country in northern Eurasia. It is a federal semi-presidential republic, comprising 83 federal subjects...
(an oblast
Oblast
Oblast is a type of administrative division in Slavic countries, including some countries of the former Soviet Union. The word "oblast" is a loanword in English, but it is nevertheless often translated as "area", "zone", "province", or "region"...
), located in the Southern Federal District
Southern Federal District
Southern Federal District is one of the eight federal districts of Russia. Its territory lies mostly on the Pontic-Caspian steppe. Its population was 13,856,700 according to the 2010 Census, living on an area of...
. Rostov Oblast has an area of 100800 square kilometres (38,919.1 sq mi) and a population of making it the sixth most populous federal subject in Russia. Its administrative center is the city of Rostov-on-Don
Rostov-on-Don
-History:The mouth of the Don River has been of great commercial and cultural importance since the ancient times. It was the site of the Greek colony Tanais, of the Genoese fort Tana, and of the Turkish fortress Azak...
, which also became the administrative center of the Southern Federal District in 2002.

The Don River, one of Europe
Europe
Europe is, by convention, one of the world's seven continents. Comprising the westernmost peninsula of Eurasia, Europe is generally 'divided' from Asia to its east by the watershed divides of the Ural and Caucasus Mountains, the Ural River, the Caspian and Black Seas, and the waterways connecting...
's largest flows through the oblast for part of its course. Lakes cover only 0.4% of the oblast's area. 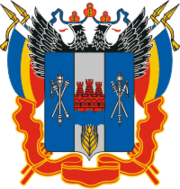 Less populous communities include the 7,599 Moldovans
Moldovans
Moldovans or Moldavians are the largest population group of Moldova...
:(0.17%); 6,840 Germans:(0.17%); 6,735 Dargins:(0.15%); 4,984 Jews
Jews
The Jews , also known as the Jewish people, are a nation and ethnoreligious group originating in the Israelites or Hebrews of the Ancient Near East. The Jewish ethnicity, nationality, and religion are strongly interrelated, as Judaism is the traditional faith of the Jewish nation...
:(0.11%); 3,968 Avars
Caucasian Avars
Avars or Caucasian Avars are a modern people of Caucasus, mainly of Dagestan, in which they are the predominant group. The Caucasian Avar language belongs to the Northeast Caucasian language family ....
:(0.09%); 3,659 Lezgins
Lezgins
The Lezgians are an ethnic group living predominantly in southern Dagestan and northeastern Azerbaijan and who speak the Lezgian language.- Historical concept :While ancient Greek historians, including Herodotus, Strabo, and Pliny the Elder, referred...
:(0.08%); 3,630 Udmurts:(0.08%); 3,400:Mordovians:(0.08%); 3,153 Greeks
Greeks
The Greeks, also known as the Hellenes , are a nation and ethnic group native to Greece, Cyprus and neighboring regions. They also form a significant diaspora, with Greek communities established around the world....
:(0.07%); 3,021 Kazakhs
Kazakhs
The Kazakhs are a Turkic people of the northern parts of Central Asia ....
:(0.07%); 3,017 Chuvash
Chuvash people
The Chuvash people are a Turkic ethnic group, native to an area stretching from the Volga Region to Siberia. Most of them live in Republic of Chuvashia and surrounding areas, although Chuvash communities may be found throughout all Russia.- Etymology :...
:(0.07%); 2,667 Ossetians
Ossetians
The Ossetians are an Iranic ethnic group of the Caucasus Mountains, eponymous of the region known as Ossetia.They speak Ossetic, an Iranian language of the Eastern branch, with most also fluent in Russian as a second language....
:(0.06%); 2,664 Mari:(0.06%); 2,231 Tabasarans:(0.05%); and 2,040 Assyrians
Assyrian people
The Assyrian people are a distinct ethnic group whose origins lie in ancient Mesopotamia...
:(0.05%).

There were also 31,529 people (0.72%) belonging to other ethno-cultural groupings. In addition, a further 7,507 (0.17%) of the inhabitants declined to state their nationality on the census questionnaire.

Major industries of Rostov Oblast are agriculture
Agriculture
Agriculture is the cultivation of animals, plants, fungi and other life forms for food, fiber, and other products used to sustain life. Agriculture was the key implement in the rise of sedentary human civilization, whereby farming of domesticated species created food surpluses that nurtured the...
, agricultural industry, food processing, heavy industry, coal
Coal
Coal is a combustible black or brownish-black sedimentary rock usually occurring in rock strata in layers or veins called coal beds or coal seams. The harder forms, such as anthracite coal, can be regarded as metamorphic rock because of later exposure to elevated temperature and pressure...
and automobile
Automobile
An automobile, autocar, motor car or car is a wheeled motor vehicle used for transporting passengers, which also carries its own engine or motor...
manufacture.