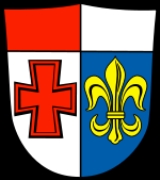 In Roman
Roman Empire
The Roman Empire was the post-Republican period of the ancient Roman civilization, characterised by an autocratic form of government and large territorial holdings in Europe and around the Mediterranean....
times the Via Claudia connected the city of Augsburg and Italy. In 233 the Alamanni
Alamanni
The Alamanni, Allemanni, or Alemanni were originally an alliance of Germanic tribes located around the upper Rhine river . One of the earliest references to them is the cognomen Alamannicus assumed by Roman Emperor Caracalla, who ruled the Roman Empire from 211 to 217 and claimed thereby to be...
broke through the Limes
Limes
A limes was a border defense or delimiting system of Ancient Rome. It marked the boundaries of the Roman Empire.The Latin noun limes had a number of different meanings: a path or balk delimiting fields, a boundary line or marker, any road or path, any channel, such as a stream channel, or any...
, and the Roman rule over Swabia was ended. During the time of the Holy Roman Empire
Holy Roman Empire
The Holy Roman Empire was a realm that existed from 962 to 1806 in Central Europe.It was ruled by the Holy Roman Emperor. Its character changed during the Middle Ages and the Early Modern period, when the power of the emperor gradually weakened in favour of the princes...
Augsburg was a bishopric principality. The city and the adjoining regions became subordinate to Bavaria
Bavaria
Bavaria, formally the Free State of Bavaria is a state of Germany, located in the southeast of Germany. With an area of , it is the largest state by area, forming almost 20% of the total land area of Germany...
after the Napoleonic Wars
Napoleonic Wars
The Napoleonic Wars were a series of wars declared against Napoleon's French Empire by opposing coalitions that ran from 1803 to 1815. As a continuation of the wars sparked by the French Revolution of 1789, they revolutionised European armies and played out on an unprecedented scale, mainly due to...
.

The district of Augsburg was established in 1972 by merging the former districts of Augsburg and Schwabmünchen and parts of other adjoining districts.

More than twice as old as Nuremberg
Nuremberg
Nuremberg[p] is a city in the German state of Bavaria, in the administrative region of Middle Franconia. Situated on the Pegnitz river and the Rhine–Main–Danube Canal, it is located about north of Munich and is Franconia's largest city. The population is 505,664...
or Munich
Munich
Munich The city's motto is "" . Before 2006, it was "Weltstadt mit Herz" . Its native name, , is derived from the Old High German Munichen, meaning "by the monks' place". The city's name derives from the monks of the Benedictine order who founded the city; hence the monk depicted on the city's coat...
, Augsburg was founded in 15 B.C. by the Roman commanders Drusus
Drusus
Drusus was a cognomen in Ancient Rome originating with the Livii. Under the Republic, it was the intellectual property and diagnostic of the Livii Drusi. Under the empire and owing to the influence of an empress, Livia Drusilla, the name was used for a branch of the Claudii into which she had...
and Tiberius
Tiberius
Tiberius , was Roman Emperor from 14 AD to 37 AD. Tiberius was by birth a Claudian, son of Tiberius Claudius Nero and Livia Drusilla. His mother divorced Nero and married Augustus in 39 BC, making him a step-son of Octavian...
. Under the orders of their stepfather Emperor Augustus
Augustus
Augustus ;23 September 63 BC – 19 August AD 14) is considered the first emperor of the Roman Empire, which he ruled alone from 27 BC until his death in 14 AD.The dates of his rule are contemporary dates; Augustus lived under two calendars, the Roman Republican until 45 BC, and the Julian...
, they enslaved the Celts and Alp-dwellers and founded the military camp Augusta Vindelicum on the site of current-day Augsburg. The camp soon became the capital of the Roman province Raetia
Raetia
Raetia was a province of the Roman Empire, named after the Rhaetian people. It was bounded on the west by the country of the Helvetii, on the east by Noricum, on the north by Vindelicia, on the west by Cisalpine Gaul and on south by Venetia et Histria...
.

Augsburg’s early development of was molded by its 400-year affiliation with the Roman Empire. Critical to its ascent were its military importance in the Roman Empire as well as its favorable location at the convergence of the Alpine rivers Lech and Wertach with direct access to the most important Alpine passes. Consequently, Augsburg was situated at the intersection of many important European east-west and north-south connections. Out of these Roman roads emerged the trade routes of the Middle Ages.

In the 13th century, Augsburg became a Free Imperial City and remained so for the next 500 years. Augsburg has been the seat of a bishop for over 1250 years.

The peak boom years were reached in the 15th and 16th centuries through the bank and metal businesses of the merchant families Fugger and Welser. The financial power of these families fostered Augsburg’s position as a cosmopolitan city, as a city of emperors and parliaments. It was a creative center for famous painters, sculptors and musicians. Augsburg is the birthplace of the painter family Holbein, the composer Leopold Mozart
Leopold Mozart
Johann Georg Leopold Mozart was a German composer, conductor, teacher, and violinist. Mozart is best known today as the father and teacher of Wolfgang Amadeus Mozart, and for his violin textbook Versuch einer gründlichen Violinschule.-Childhood and student years:He was born in Augsburg, son of...
and the playwright Berthold Brecht. Rococo
Rococo
Rococo , also referred to as "Late Baroque", is an 18th-century style which developed as Baroque artists gave up their symmetry and became increasingly ornate, florid, and playful...
became so prevalent in that it became known as “Augsburg style”.

After the Thirty Years’ War, the decorative arts came into fruition. Gold- and silversmiths as well as copper engraving and lithography flourished. At the end of the 18th century, the textile industry began its rise to prominence followed by machine manufacturing. Groundbreaking innovations in industry lent Augsburg international standing.

Rudolf Diesel
Rudolf Diesel
Rudolf Christian Karl Diesel was a German inventor and mechanical engineer, famous for the invention of the diesel engine.-Early life:Diesel was born in Paris, France in 1858 the second of three children of Theodor and Elise Diesel. His parents were Bavarian immigrants living in Paris. Theodor...
constructed the first internal combustion engine here, Linde built the first refrigerator, Messerschmitt
Messerschmitt
Messerschmitt AG was a famous German aircraft manufacturing corporation named for its chief designer, Willy Messerschmitt, and known primarily for its World War II fighter aircraft, notably the Bf 109 and Me 262...
created the first mass-produced jet airplane. Today, with its rich heritage, Augsburg and the region are centers for industry, science, art and culture. Augsburg has circa 275,000 inhabitants, is a university city and is the third largest economic- and industrial center in Bavaria
Bavaria
Bavaria, formally the Free State of Bavaria is a state of Germany, located in the southeast of Germany. With an area of , it is the largest state by area, forming almost 20% of the total land area of Germany...
. The city of Augsburg and its surrounding rural areas offer attractive business and industry zones and are the headquarters of research institutions and technology concerns.

Augsburg is the only German city with its own legal holiday, the Peace of Augsburg, celebrated on August 8 of every year. This gives Augsburg more legal holidays than any other region or city in Germany.

The district comprises a large area west of the city of Augsburg. 90 % are located in the Augsburg-Westliche Wälder Nature Park
Augsburg-Westliche Wälder Nature Park
The Augsburg-Western Woods Nature Park is one of the two nature parks in Bavarian Swabia. The 1988 founded park has a size of 1175 km².The nature park is bordered by the rivers Danube, Wertach, Schmutter, Flossach and Mindel...
, which is a hilly region covered with forests. It is sparsely populated and crisscrossed by brooks, flowing either eastwards to the Lech or northwards to the Danube
Danube
The Danube is a river in the Central Europe and the Europe's second longest river after the Volga. It is classified as an international waterway....
. The Lech forms the eastern border of the district.

The six cities (see below) are all situated in the easternmost part of the district, mainly in the vicinity of Augsburg. The western forest region consists of small villages. 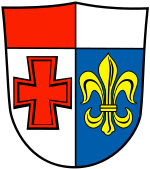 The coat of arms displays: