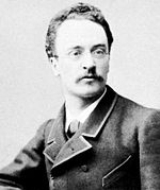 Overview
Rudolf Christian Karl Diesel (ˈʁuːdɔlf ˈkʁɪstjan ˈkaʁl ˈdiːzəl; March 18, 1858 – September 29, 1913) was a German
Germans
The Germans are a Germanic ethnic group native to Central Europe. The English term Germans has referred to the German-speaking population of the Holy Roman Empire since the Late Middle Ages....
inventor and mechanical engineer, famous for the invention of the diesel engine
Diesel engine
A diesel engine is an internal combustion engine that uses the heat of compression to initiate ignition to burn the fuel, which is injected into the combustion chamber...
.
Diesel was born in Paris
Paris
Paris is the capital and largest city in France, situated on the river Seine, in northern France, at the heart of the Île-de-France region...
, France
France
The French Republic , The French Republic , The French Republic , (commonly known as France , is a unitary semi-presidential republic in Western Europe with several overseas territories and islands located on other continents and in the Indian, Pacific, and Atlantic oceans. Metropolitan France...
in 1858 the second of three children of Theodor and Elise (Strobel) Diesel. His parents were Bavarian immigrants living in Paris. Theodor Diesel, a bookbinder by trade, left his home town of Augsburg
Augsburg
Augsburg is a city in the south-west of Bavaria, Germany. It is a university town and home of the Regierungsbezirk Schwaben and the Bezirk Schwaben. Augsburg is an urban district and home to the institutions of the Landkreis Augsburg. It is, as of 2008, the third-largest city in Bavaria with a...
, Bavaria
Kingdom of Bavaria
The Kingdom of Bavaria was a German state that existed from 1806 to 1918. The Bavarian Elector Maximilian IV Joseph of the House of Wittelsbach became the first King of Bavaria in 1806 as Maximilian I Joseph. The monarchy would remain held by the Wittelsbachs until the kingdom's dissolution in 1918...
, in 1848.

The diesel engine can be fed with vegetable oils and would help considerably in the development of agriculture of the countries which use it.

The use of vegetable oils for engine fuels may seem insignificant today. But such oils may become in course of time as important as petroleum and the coal tar products of the present time.