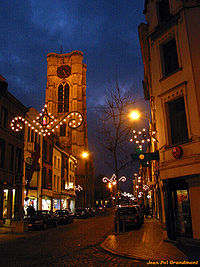 Ath is a Belgian
Belgium
Belgium , officially the Kingdom of Belgium, is a federal state in Western Europe. It is a founding member of the European Union and hosts the EU's headquarters, and those of several other major international organisations such as NATO.Belgium is also a member of, or affiliated to, many...
municipality located in the Walloon province
Provinces of Belgium
Belgium is divided into three regions, two of them are subdivided into five provinces each.The division into provinces is fixed by Article 5 of the Belgian Constitution...
of Hainaut. The Ath municipality
Municipality
A municipality is essentially an urban administrative division having corporate status and usually powers of self-government. It can also be used to mean the governing body of a municipality. A municipality is a general-purpose administrative subdivision, as opposed to a special-purpose district...
includes the old communes of Lanquesaint, Irchonwelz, Ormeignies
Ormeignies
The village of Ormeignies has an ancient history. Farmers in Neolithic time were settled there, as far back as 4000 BC.The village church, dedicated to Saint Ursmer and built from stone and brick c.1780, is a good example of neo-classical architecture.-The farm of the Grande Rosière:The Rosiere...
, Bouvignies
Bouvignies
-References:*...
, Ostiches, Rebaix, Maffle, Arbre, Houtaing, Ligne, Mainvault, Moulbaix, Villers-Notre-Dame, Villers-Saint-Amand, Ghislenghien
Ghislenghien
Ghislenghien is a small town in Belgium near Ath. On July 30, 2004 a high-pressure gas pipeline explosion killed 24 people....
, Isières, Meslin-l'Evêque, and Gibecq.

Ath is known as the "City of Giants" after the "Ducasse" festivities which take place every year on the fourth weekend in August. Huge figures representing Goliath, Samson
Samson
Samson, Shimshon ; Shamshoun or Sampson is the third to last of the Judges of the ancient Israelites mentioned in the Tanakh ....
, and other allegoric figures are paraded through the streets, and Goliath's wedding and his famous fight with David
David
David was the second king of the united Kingdom of Israel according to the Hebrew Bible and, according to the Gospels of Matthew and Luke, an ancestor of Jesus Christ through both Saint Joseph and Mary...
are re-enacted.

The archeological record proves the existence of several Gallo-Roman settlements in the Ath area. The origin of the city of Ath, however, dates from around 1160, when Baldwin IV, Count of Hainaut
Baldwin IV, Count of Hainaut
Baldwin IV was count of Hainaut from 1120 to his death. He was the son of Baldwin III, Count of Hainaut, and Yolande de Wassenberg.-History:...
, bought some territory from his liegeman, Gilles de Trazegnies. A few years later, Baldwin built the Burbant Tower – which can still be seen today – to protect his new acquisition. The new city was soon given privileges and started attracting dwellers around its newly built (1325) market hall on the Grand-Place.

Ath was the setting of the "Peace of Ath", signed on June 4, 1357 to end the question of the Brabant
Duchy of Brabant
The Duchy of Brabant was a historical region in the Low Countries. Its territory consisted essentially of the three modern-day Belgian provinces of Flemish Brabant, Walloon Brabant and Antwerp, the Brussels-Capital Region and most of the present-day Dutch province of North Brabant.The Flag of...
succession. By then, the weekly Ath market, which took place – and still takes place – on Thursdays, had started attracting sellers from a much larger region. The production of linen, cloth, hide, and luxury items such as gold ware, cabinets, and sculptures was growing fast. The population growth necessitated the building of a second wall, which was completed at the end of the 14th century. In 1416, the city built a school for the study of Latin
Latin
Latin is an Italic language originally spoken in Latium and Ancient Rome. It, along with most European languages, is a descendant of the ancient Proto-Indo-European language. Although it is considered a dead language, a number of scholars and members of the Christian clergy speak it fluently, and...
, which Justus Lipsius
Justus Lipsius
Justus Lipsius was a Southern-Netherlandish philologist and humanist. Lipsius wrote a series of works designed to revive ancient Stoicism in a form that would be compatible with Christianity. The most famous of these is De Constantia...
attended. The city counted then about 5,000 people.

In 1667, Ath was conquered in a single day by the army of Louis XIV and became the first French
France
The French Republic , The French Republic , The French Republic , (commonly known as France , is a unitary semi-presidential republic in Western Europe with several overseas territories and islands located on other continents and in the Indian, Pacific, and Atlantic oceans. Metropolitan France...
city in the Spanish Netherlands. Soon after, Vauban
Vauban
Sébastien Le Prestre, Seigneur de Vauban and later Marquis de Vauban , commonly referred to as Vauban, was a Marshal of France and the foremost military engineer of his age, famed for his skill in both designing fortifications and breaking through them...
built new fortifications, which included no less than eight bastions. The city suffered again at the hands of the French army in 1745. At the end of the 18th century, Ath counted about 7,300 inhabitants but the population count decreased in the first half of the 19th century.

In 1824, the Dutch
Dutch people
The Dutch people are an ethnic group native to the Netherlands. They share a common culture and speak the Dutch language. Dutch people and their descendants are found in migrant communities worldwide, notably in Suriname, Chile, Brazil, Canada, Australia, South Africa, New Zealand, and the United...
under King William I
William I of the Netherlands
William I Frederick, born Willem Frederik Prins van Oranje-Nassau , was a Prince of Orange and the first King of the Netherlands and Grand Duke of Luxembourg....
, built the Féron fort, and the city gained strategic value again. The final dismantlement of the fortifications a few years later freed much-needed land for the activities of a growing population. A new growth period took place between 1850 and 1914 thanks to the forestry, agricultural (breweries, mills) and textile industries.

In the 20th century, most of these industries went into decline and were replaced by commercial, administrative and educational activities. In the last 30 years, several neighbourhoods were revitalized and developed, and the city's monuments renovated or restored. 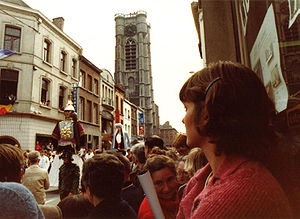 The Ghislenghien industrial park near Ath was the scene of one of Belgium's worst ever industrial disasters on July 30, 2004. Around 8:30am local time
Central European Time
Central European Time , used in most parts of the European Union, is a standard time that is 1 hour ahead of Coordinated Universal Time . The time offset from UTC can be written as +01:00...
, workers constructing a new factory for abrasive
Abrasive
An abrasive is a material, often a mineral, that is used to shape or finish a workpiece through rubbing which leads to part of the workpiece being worn away...
s firm Diamant Boart
Diamant Boart
Diamant Boart S.A. is a world-leading manufacturer and distributor of diamond tools and related equipment for the construction and stone market. The company was founded in 1937....
(a subsidiary
Subsidiary
A subsidiary company, subsidiary, or daughter company is a company that is completely or partly owned and wholly controlled by another company that owns more than half of the subsidiary's stock. The subsidiary can be a company, corporation, or limited liability company. In some cases it is a...
of the Electrolux Group
Electrolux
The Electrolux Group is a Swedish appliance maker.As of 2010 the 2nd largest home appliance manufacturer in the world after Whirlpool, its products sell under a variety of brand names including its own and are primarily major appliances and vacuum cleaners...
http://www.diamant-boart.com/, http://www.electrolux.com/node684.asp) reported a strong smell of gas
Natural gas
Natural gas is a naturally occurring gas mixture consisting primarily of methane, typically with 0–20% higher hydrocarbons . It is found associated with other hydrocarbon fuel, in coal beds, as methane clathrates, and is an important fuel source and a major feedstock for fertilizers.Most natural...
. It is believed the gas was escaping from a high-pressure underground pipeline
Pipeline transport
Pipeline transport is the transportation of goods through a pipe. Most commonly, liquids and gases are sent, but pneumatic tubes that transport solid capsules using compressed air are also used....
conveying natural gas from Zeebrugge
Zeebrugge
Zeebrugge is a village on the coast of Belgium and a subdivision of Bruges, for which it is the modern port. Zeebrugge serves as both the international port of Bruges-Zeebrugge and a seafront resort with hotels, cafés, a marina and a beach.-Location:...
to France
France
The French Republic , The French Republic , The French Republic , (commonly known as France , is a unitary semi-presidential republic in Western Europe with several overseas territories and islands located on other continents and in the Indian, Pacific, and Atlantic oceans. Metropolitan France...
, operated by gas transportation company Fluxys
Fluxys
Fluxys is a Belgium-based company, mainly acting as a natural gas operator. In 2004, it employed around 850 people and its infrastructure comprised about 3,700 km of pipelines and a terminal in Zeebrugge, Belgium...
. Firefighter
Firefighter
Firefighters are rescuers extensively trained primarily to put out hazardous fires that threaten civilian populations and property, to rescue people from car incidents, collapsed and burning buildings and other such situations...
s were soon on the scene and were attempting to clear the area when at least two explosions occurred at around 9:00am. The strongest of these demolished the partly built Diamant Boart structure, and fires were started in several other buildings. The official death-toll has risen to 23, with over 120 injured. Five volunteer firemen and one police officer were among the dead.

The cause of the leak has not yet been ascertained. After the explosion, damages by a construction machine were discovered on the exploded part of the pipeline and the adjacent parts. Probably these were the result of construction works a few weeks before the explosion. The pipeline probably ruptured completely on July 30, 2004 when operator Fluxys raised the pressure.