The Proclamation of Masterpieces of the Oral and Intangible Heritage of Humanity was made by the Director-General of UNESCO
UNESCO
The United Nations Educational, Scientific and Cultural Organization is a specialized agency of the United Nations...
starting in 2001 to raise awareness on intangible cultural heritage
Intangible cultural heritage
The concept of intangible cultural heritage emerged in the 1990s, as a counterpart to the World Heritage that focuses mainly on tangible aspects of culture...
and encourage local communities to protect them and the local people who sustain these forms of cultural expressions. Several manifestations of intangible heritage around the world were awarded the title of Masterpieces to recognize the value of the non-material component of culture, as well as entail the commitment of states to promote and safeguard the Masterpieces. Further proclamations occurred biennially until 2005.

Until 2005, a total of 90 Masterpieces from 70 countries had been proclaimed. 76 more elements were added on 30 September 2009, during the fourth session of the Committee.

UNESCO defines oral and intangible heritage as “the totality of tradition-based creations of a cultural community expressed by a group or individuals and recognized as reflecting the expectations of a community in so far as they reflect its cultural and social identity.” Language
Language
Language may refer either to the specifically human capacity for acquiring and using complex systems of communication, or to a specific instance of such a system of complex communication...
, literature
Literature
Literature is the art of written works, and is not bound to published sources...
, music
Music
Music is an art form whose medium is sound and silence. Its common elements are pitch , rhythm , dynamics, and the sonic qualities of timbre and texture...
and dance
Dance
Dance is an art form that generally refers to movement of the body, usually rhythmic and to music, used as a form of expression, social interaction or presented in a spiritual or performance setting....
, game
Game
A game is structured playing, usually undertaken for enjoyment and sometimes used as an educational tool. Games are distinct from work, which is usually carried out for remuneration, and from art, which is more often an expression of aesthetic or ideological elements...
s and sports, culinary traditions
Cuisine
Cuisine is a characteristic style of cooking practices and traditions, often associated with a specific culture. Cuisines are often named after the geographic areas or regions that they originate from...
, rituals and mythologies
Mythologies
Mythologies is a book by Roland Barthes, published in 1957. It is a collection of essays taken from Les Lettres nouvelles, examining the tendency of contemporary social value systems to create modern myths...
, knowledge and practices concerning the universe, know-how linked to handicrafts, and cultural spaces are among the many forms of intangible heritage. Intangible heritage is seen as a repository of cultural diversity
Cultural diversity
Cultural diversity is having different cultures respect each other's differences. It could also mean the variety of human societies or cultures in a specific region, or in the world as a whole...
, and creative expression, as well as a driving force for living cultures. Since it can be vulnerable to forces of globalization
Globalization
Globalization refers to the increasingly global relationships of culture, people and economic activity. Most often, it refers to economics: the global distribution of the production of goods and services, through reduction of barriers to international trade such as tariffs, export fees, and import...
, social transformation
Social transformation
One definition of Social transformation is the process by which an individual alters the socially ascribed social status of their parents into a socially achieved status for themselves. However another definition refers to large scale social change as in cultural reforms or transformations...
, and intolerance
Toleration
Toleration is "the practice of deliberately allowing or permitting a thing of which one disapproves. One can meaningfully speak of tolerating, ie of allowing or permitting, only if one is in a position to disallow”. It has also been defined as "to bear or endure" or "to nourish, sustain or preserve"...
, UNESCO encourages communities to identify, document, protect, promote and revitalize such heritage.

Upon the adoption of the Universal Declaration on Cultural Diversity on November 2001, UNESCO encouraged recognition and protection of intangible heritage in the same way as natural and cultural treasures of tangible heritage are protected.

Although UNESCO has had a program (active since 1972) to protect the world’s cultural and natural heritage, known as the World Heritage List, it thought that the List was directed mostly to the protection and representation of tangible, monumental elements of past cultures or natural environment. The Masterpieces of the Oral and Intangible Heritage of Humanity, is UNESCO’s response to the call for humanity to widen its concept of cultural heritage by bringing in the intangible aspects.

The idea for the project came from people concerned about Morocco
Morocco
Morocco , officially the Kingdom of Morocco , is a country located in North Africa. It has a population of more than 32 million and an area of 710,850 km², and also primarily administers the disputed region of the Western Sahara...
’s Jeema’ el Fna Square in Marrakesh. The locality is known for its active concentration of traditional activities by storytellers, musicians and performers, but it was threatened by economic development pressures. In fighting for the protection of traditions, the residents called for action on an international level to recognize the need for the protection of such places—termed as cultural spaces—and other popular and traditional forms of cultural expression. The UNESCO label of Masterpieces of the Oral and Intangible Heritage of Humanity aims to raise awareness about the importance of oral and intangible heritage as an essential component of cultural diversity. 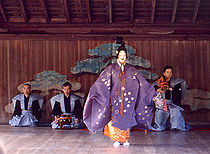 Beginning in 2001, the new program has started identifying various forms of intangible heritage around the world for safeguarding through a Proclamation. Under this act, national governments acceding to the UNESCO Convention, known as member states, are each allowed to submit a single candidature file, in addition to multi-national nominations, of intangible cultural heritage occurring within their territories. The nominated intangible heritage may fall into two categories as set by the program:

The nominations are evaluated by a panel of experts in intangible heritage, including specialized non-government organizations (NGOs), and are further scrutinized by a jury, whose 18 members have previously been selected by the UNESCO Director-General. A set of criteria has been created to aid in the assessing of the nominations. The cultural expressions and spaces proposed for proclamation had to:

Through the nomination process, the member states are encouraged to compile an inventory of their intangible heritage, raising awareness and protection of these treasures. In turn, the proclaimed Masterpieces receive commitment from UNESCO in financing plans for their conservation.

Proclamations in 2001, 2003 and 2005, designated a total of 90 forms of intangible heritage around the world as Masterpieces:

The process for designating an element for the list follows similar steps as the Proclamation. The former role of the jury was supplanted by a new body known as the Intergovernmental Committee for the Safeguarding of Intangible Cultural Heritage.

In addition, UNESCO established a separate program, identifying elements for the List of Intangible Cultural Heritage in Need of Urgent Safeguarding, to highlight elements at risk despite the efforts of the local community to preserve and protect it, as a result of which it cannot be expected to survive without immediate safeguarding. It also established a fund to provide emergency assistance for the preservation of such elements.