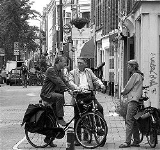 Overview
The Dutch people are an ethnic group
Ethnic group
An ethnic group is a group of people whose members identify with each other, through a common heritage, often consisting of a common language, a common culture and/or an ideology that stresses common ancestry or endogamy...
native to the Netherlands
Netherlands
The Netherlands is a constituent country of the Kingdom of the Netherlands, located mainly in North-West Europe and with several islands in the Caribbean. Mainland Netherlands borders the North Sea to the north and west, Belgium to the south, and Germany to the east, and shares maritime borders...
. They share a common culture and speak the Dutch language
Dutch language
Dutch is a West Germanic language and the native language of the majority of the population of the Netherlands, Belgium, and Suriname, the three member states of the Dutch Language Union. Most speakers live in the European Union, where it is a first language for about 23 million and a second...
. Dutch people and their descendants are found in migrant communities worldwide, notably in Suriname
Suriname
Suriname , officially the Republic of Suriname , is a country in northern South America. It borders French Guiana to the east, Guyana to the west, Brazil to the south, and on the north by the Atlantic Ocean. Suriname was a former colony of the British and of the Dutch, and was previously known as...
, Chile
Dutch Chilean
In 1600 , the Chilean city of Valdivia was conquered by Dutch pirate Sebastian de Cordes. He left the city after some months. Then in 1642 the VOC and the WIC sent a fleet of some ships to Chile to conquer the city of Valdivia and the goldmines of the Spanish. The expedition was conducted by...
, Brazil
Brazil
Brazil , officially the Federative Republic of Brazil , is the largest country in South America. It is the world's fifth largest country, both by geographical area and by population with over 192 million people...
, Canada
Canada
Canada is a North American country consisting of ten provinces and three territories. Located in the northern part of the continent, it extends from the Atlantic Ocean in the east to the Pacific Ocean in the west, and northward into the Arctic Ocean...
, Australia
Australia
Australia , officially the Commonwealth of Australia, is a country in the Southern Hemisphere comprising the mainland of the Australian continent, the island of Tasmania, and numerous smaller islands in the Indian and Pacific Oceans. It is the world's sixth-largest country by total area...
, South Africa
South Africa
The Republic of South Africa is a country in southern Africa. Located at the southern tip of Africa, it is divided into nine provinces, with of coastline on the Atlantic and Indian oceans...
, New Zealand
New Zealand
New Zealand is an island country in the south-western Pacific Ocean comprising two main landmasses and numerous smaller islands. The country is situated some east of Australia across the Tasman Sea, and roughly south of the Pacific island nations of New Caledonia, Fiji, and Tonga...
, and the United States
United States
The United States of America is a federal constitutional republic comprising fifty states and a federal district...
.

The traditional art and culture of the Dutch encompasses various forms of traditional music
Traditional music
Traditional music is the term increasingly used for folk music that is not contemporary folk music. More on this is at the terminology section of the World music article...
, dance
Dance
Dance is an art form that generally refers to movement of the body, usually rhythmic and to music, used as a form of expression, social interaction or presented in a spiritual or performance setting....
s, architectural style
Architectural style
Architectural styles classify architecture in terms of the use of form, techniques, materials, time period, region and other stylistic influences. It overlaps with, and emerges from the study of the evolution and history of architecture...
s and clothing, some of which are globally recognizable. Internationally, Dutch painters such as Rembrandt, Vermeer and Van Gogh are held in high regard.

who is all the dutch lensmaker?

who is all the fdutch lensmaker?
More