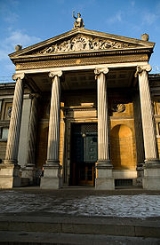 Encyclopedia
The Ashmolean Museum on Beaumont Street
Beaumont Street
Beaumont Street is a street in the centre of Oxford, England.The street was laid out from 1828 to 1837 with elegant terraced houses in the Regency style. Before that, it was the location of Beaumont Palace, now noted by a plaque near the junction with Walton Street...
, Oxford
Oxford
The city of Oxford is the county town of Oxfordshire, England. The city, made prominent by its medieval university, has a population of just under 165,000, with 153,900 living within the district boundary. It lies about 50 miles north-west of London. The rivers Cherwell and Thames run through...
, England, is the world's first university museum. Its first building was built in 1678–1683 to house the cabinet of curiosities
Cabinet of curiosities
A cabinet of curiosities was an encyclopedic collection in Renaissance Europe of types of objects whose categorical boundaries were yet to be defined. They were also known by various names such as Cabinet of Wonder, and in German Kunstkammer or Wunderkammer...
Elias Ashmole
Elias Ashmole
Elias Ashmole was a celebrated English antiquary, politician, officer of arms, astrologer and student of alchemy. Ashmole supported the royalist side during the English Civil War, and at the restoration of Charles II he was rewarded with several lucrative offices.Ashmole was an antiquary with a...
gave Oxford University in 1677.

The collection include that of Elias Ashmole
Elias Ashmole
Elias Ashmole was a celebrated English antiquary, politician, officer of arms, astrologer and student of alchemy. Ashmole supported the royalist side during the English Civil War, and at the restoration of Charles II he was rewarded with several lucrative offices.Ashmole was an antiquary with a...
, which he had collected himself as well as works he had acquired from the gardeners, travellers and collectors John Tradescant the elder
John Tradescant the elder
John Tradescant the elder , father of John Tradescant the younger, was an English naturalist, gardener, collector and traveller, probably born in Suffolk, England...
and his son of the same name
John Tradescant the younger
John Tradescant the Younger , son of John Tradescant the elder, was a botanist and gardener, born in Meopham, Kent and educated at The King's School, Canterbury...
. The collection included antique coins, books, engravings, geological specimens, and zoological specimens—one of which was the stuffed body of the last Dodo
Dodo
The dodo was a flightless bird endemic to the Indian Ocean island of Mauritius. Related to pigeons and doves, it stood about a meter tall, weighing about , living on fruit, and nesting on the ground....
ever seen in Europe, but by 1755 it was so moth-eaten it was destroyed, except for its head and one claw. The museum opened on 24 May 1683, with naturalist
Natural history
Natural history is the scientific research of plants or animals, leaning more towards observational rather than experimental methods of study, and encompasses more research published in magazines than in academic journals. Grouped among the natural sciences, natural history is the systematic study...
Robert Plot
Robert Plot
Robert Plot was an English naturalist, first Professor of Chemistry at the University of Oxford, and the first keeper of the Ashmolean Museum....
as the first keeper. The first building, which became known as the Old Ashmolean
Museum of the History of Science, Oxford
The Museum of the History of Science, located in Broad Street, Oxford, is home to an unrivalled collection of scientific instruments from medieval times to the 17th century. Its collection of 18th and 19th-century instruments is also substantial...
, is sometimes attributed to Sir Christopher Wren
Christopher Wren
Sir Christopher Wren FRS is one of the most highly acclaimed English architects in history.He used to be accorded responsibility for rebuilding 51 churches in the City of London after the Great Fire in 1666, including his masterpiece, St. Paul's Cathedral, on Ludgate Hill, completed in 1710...
or Thomas Wood
Thomas Wood
Thomas Wood may refer to:* E. Thomas Wood , American journalist and author* Thomas Harold Wood , Canadian politician* Thomas J. Wood , Union General during the American Civil War* Thomas Jefferson Wood , U.S...
.

After the various specimens had been moved into new museums, the "Old Ashmolean" building on Broad Street was used as office space for the Oxford English Dictionary
Oxford English Dictionary
The Oxford English Dictionary , published by the Oxford University Press, is the self-styled premier dictionary of the English language. Two fully bound print editions of the OED have been published under its current name, in 1928 and 1989. The first edition was published in twelve volumes , and...
staff. Since 1924, the building has been established as the Museum of the History of Science, with exhibitions including the scientific instruments given to Oxford University by Lewis Evans
Lewis Evans (collector)
Lewis Evans was an English businessman and scientific instrument collector.Lewis Evans was the son of Sir John Evans, an archaeologist, and younger brother of the more famous archaeologist Sir Arthur Evans who excavated Knossos in Crete. He studied chemistry at University College London and...
(1853–1930), amongst them the world's largest collection of astrolabe
Astrolabe
An astrolabe is an elaborate inclinometer, historically used by astronomers, navigators, and astrologers. Its many uses include locating and predicting the positions of the Sun, Moon, planets, and stars, determining local time given local latitude and longitude, surveying, triangulation, and to...
s.

The present building dates from 1845. It was designed by Charles Cockerell
Charles Robert Cockerell
Charles Robert Cockerell was an English architect, archaeologist, and writer.-Life:Charles Robert Cockerell was educated at Westminster School from 1802. From the age of sixteen, he trained in the architectural practice of his father, Samuel Pepys Cockerell...
in a classical
Classicism
Classicism, in the arts, refers generally to a high regard for classical antiquity, as setting standards for taste which the classicists seek to emulate. The art of classicism typically seeks to be formal and restrained: of the Discobolus Sir Kenneth Clark observed, "if we object to his restraint...
style and stands on Beaumont Street. One wing of the building is occupied by the Taylor Institution
Taylor Institution
The Taylor Institution comprises the buildings in Oxford which harbour the libraries dedicated to the study of the European Languages at Oxford University. It also includes lecture rooms used by the Faculty of Medieval and Modern Languages, University of Oxford...
, the modern languages faculty of the university. The main museum contains huge collections of archaeology
Archaeology
Archaeology, or archeology , is the study of human society, primarily through the recovery and analysis of the material culture and environmental data that they have left behind, which includes artifacts, architecture, biofacts and cultural landscapes...
specimens and fine art. It has one of the best collections of Pre-Raphaelite paintings, majolica
Maiolica
Maiolica is Italian tin-glazed pottery dating from the Renaissance. It is decorated in bright colours on a white background, frequently depicting historical and legendary scenes.-Name:...
pottery and English silver. The archaeology department includes the bequest of Arthur Evans
Arthur Evans
Sir Arthur John Evans FRS was a British archaeologist most famous for unearthing the palace of Knossos on the Greek island of Crete and for developing the concept of Minoan civilization from the structures and artifacts found there and elsewhere throughout eastern Mediterranean...
and so has an excellent collection of Greek
Ancient Greece
Ancient Greece is a civilization belonging to a period of Greek history that lasted from the Archaic period of the 8th to 6th centuries BC to the end of antiquity. Immediately following this period was the beginning of the Early Middle Ages and the Byzantine era. Included in Ancient Greece is the...
and Minoan
Minoan civilization
The Minoan civilization was a Bronze Age civilization that arose on the island of Crete and flourished from approximately the 27th century BC to the 15th century BC. It was rediscovered at the beginning of the 20th century through the work of the British archaeologist Arthur Evans...
pottery. The department also has an extensive collection of antiquities from Ancient Egypt
Ancient Egypt
Ancient Egypt was an ancient civilization of Northeastern Africa, concentrated along the lower reaches of the Nile River in what is now the modern country of Egypt. Egyptian civilization coalesced around 3150 BC with the political unification of Upper and Lower Egypt under the first pharaoh...
and the Sudan, and the museum hosts the Griffith Institute
Griffith Institute
The Griffith Institute is an institution based in the Ashmolean Museum of the University of Oxford for the advancement of Egyptology as a discipline. The Griffith Institute is named after the eminent Egyptologist Francis Llewellyn Griffith, who bequeathed funds within his will for the foundation of...
for the advancement of Egyptology.

On 31 December 1999 (New Year's Eve), thieves used scaffolding on an adjoining building to climb onto the roof of the Ashmolean to break through a skylight, stealing a painting by Cézanne. As the thieves ignored other works in the same room and it has not been offered for sale, it is speculated that this was a case of an artwork stolen to order.

The interior of the Ashmolean has been extensively modernised in recent years and now includes a restaurant and large gift shop. The Sackler Library
Sackler Library
The Sackler Library holds a large portion of the classical, art historical, and archaeological works belonging to the University of Oxford, England.- History :...
, incorporating the older library collections of the Ashmolean, opened in 2001 and has allowed an expansion of the book collection, which concentrates on classical civilization, archaeology and art history.

Between 2006 and 2009, the museum was extensively rebuilt and expanded to the designs of architect Rick Mather
Rick Mather
Rick Mather is an American-born architect working in England. Born in Portland, Oregon and awarded a B.arch. at the University of Oregon in 1961, he came to London in 1963 where he founded his own practice, Rick Mather Architects, a decade later....
and the exhibition design company Metaphor
Metaphor (designers)
Metaphor is a London-based, global design firm that was founded in 2000 by Stephen Greenberg and Rachel Morris. Metaphor specialises in the re-presentation of museums, palaces, forts, landscapes and country houses through masterplanning and design...
, supported by the Heritage Lottery Fund
Heritage Lottery Fund
The Heritage Lottery Fund is a fund established in the United Kingdom under the National Lottery etc. Act 1993. The Fund opened for applications in 1994. It uses money raised through the National Lottery to transform and sustain the UK’s heritage...
. The rebuilding resulted in five floors instead of three, with a doubling of the display space as well as new conservation studios and an education centre. The renovated museum re-opened on 7 November 2009.

Highlights of the Ashmolean's collection include:

Beginning in 1973, the position of Keeper was superseded by that of Director: