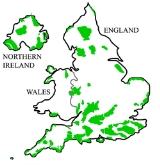 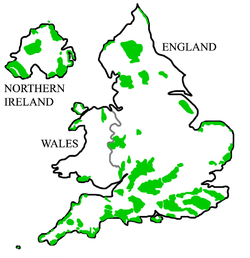 An Area of Outstanding Natural Beauty (AONB) is an area of countryside
Rural
Rural areas or the country or countryside are areas that are not urbanized, though when large areas are described, country towns and smaller cities will be included. They have a low population density, and typically much of the land is devoted to agriculture...
considered to have significant landscape value in England, Wales
Wales
Wales is a country that is part of the United Kingdom and the island of Great Britain, bordered by England to its east and the Atlantic Ocean and Irish Sea to its west. It has a population of three million, and a total area of 20,779 km²...
or Northern Ireland
Northern Ireland
Northern Ireland is one of the four countries of the United Kingdom. Situated in the north-east of the island of Ireland, it shares a border with the Republic of Ireland to the south and west...
, that has been specially designated by the Countryside Agency
Countryside Agency
The Countryside Agency in England was a statutory body set up in 1999 with the task of improving the quality of the rural environment and the lives of those living in it. The Agency was formed by merging the Countryside Commission and the Rural Development Commission...
(now Natural England
Natural England
Natural England is the non-departmental public body of the UK government responsible for ensuring that England's natural environment, including its land, flora and fauna, freshwater and marine environments, geology and soils, are protected and improved...
) on behalf of the United Kingdom government; the Countryside Council for Wales
Countryside Council for Wales
The Countryside Council for Wales is an Assembly Government Sponsored Body. It is the Welsh Assembly Government's wildlife conservation authority for Wales...
on behalf of the Welsh Government; or the Northern Ireland Environment Agency on behalf of the Northern Ireland Executive
Northern Ireland Executive
The Northern Ireland Executive is the executive arm of the Northern Ireland Assembly, the devolved legislature for Northern Ireland. It is answerable to the Assembly and was established according to the terms of the Northern Ireland Act 1998, which followed the Good Friday Agreement...
.

The primary purpose of the AONB designation is to conserve and enhance the natural beauty of the landscape, with two secondary aims: meeting the need for quiet enjoyment of the countryside and having regard for the interests of those who live and work there. To achieve these aims, AONBs rely on planning controls
Town and country planning in the United Kingdom
Town and Country Planning is the land use planning system governments use to balance economic development and environmental quality. Each country of the United Kingdom has its own planning system that is responsible for town and country planning devolved to the Northern Ireland Assembly, the...
and practical countryside management.

There are 35 AONBs in England, four in Wales, one (Wye Valley
Wye Valley
The Wye Valley Area of Outstanding Natural Beauty is an internationally important protected landscape straddling the border between England and Wales. It is one of the most dramatic and scenic landscape areas in southern Britain....
) that is in both England and Wales and nine in Northern Ireland. The first AONB was awarded in 1956 to the Gower Peninsula
Gower Peninsula
Gower or the Gower Peninsula is a peninsula in south Wales, jutting from the coast into the Bristol Channel, and administratively part of the City and County of Swansea. Locally it is known as "Gower"...
, south Wales. The most recently confirmed is the Tamar Valley AONB in 1994. AONBs vary greatly in terms of size, type and use of land, whether they are partly or wholly open to the public. All English and Welsh AONBs have a dedicated AONB officer and other staff. The smallest AONB is the Isles of Scilly
Isles of Scilly
The Isles of Scilly form an archipelago off the southwestern tip of the Cornish peninsula of Great Britain. The islands have had a unitary authority council since 1890, and are separate from the Cornwall unitary authority, but some services are combined with Cornwall and the islands are still part...
(1976), 16 km² (6.2 sq mi), and the largest AONB is the Cotswolds
Cotswolds
The Cotswolds are a range of hills in west-central England, sometimes called the Heart of England, an area across and long. The area has been designated as the Cotswold Area of Outstanding Natural Beauty...
(1966), 2038 km² (786.9 sq mi). The AONBs of England and Wales together cover around 18% of the countryside in the two countries. The National Association for AONBs is an independent organisation acting on behalf of AONBs and their partners.

There are growing concerns among environmental and countryside groups that AONB status is increasingly under threat from development. The Campaign to Protect Rural England said in July 2006 that many AONBs were under greater threat than ever before. Three particular sites were cited: the Dorset AONB threatened by a road plan, the threat of a football stadium in the Sussex Downs AONB
Sussex Downs AONB
Sussex Downs Area of Outstanding Natural Beauty in England was designated in 1966. The designation was revoked in March 2010, together with the neighbouring East Hampshire AONB, upon the establishment of the South Downs National Park ....
, and, larger than any other, a £1 billion plan by Imperial College to build thousands of houses and offices on hundreds of acres of AONB land on the Kent Downs
Kent Downs
Kent Downs is an Area of Outstanding Natural Beauty in Kent, England . They are the eastern half of the North Downs and stretch from the London/Surrey borders to the White Cliffs of Dover...
at Wye. Imperial College have now withdrawn their plans for development, seemingly to the disappointment of both Ashford Borough and Kent County councils (September 2006). In September 2007 government approval was finally given for the development of a new football ground for Brighton and Hove Albion within the boundaries of the Sussex Downs AONB, after a fierce fight by conservationists. The subsequent development, known as Falmer Stadium
Falmer Stadium
Falmer Stadium, known for sponsorship purposes as the American Express Community Stadium, or The Amex, is a football stadium near the village of Falmer in Brighton and Hove and is the home of Brighton & Hove Albion F.C.. The stadium was handed over from the developers to the club on 31 May 2011...
, was officially opened in July 2011.