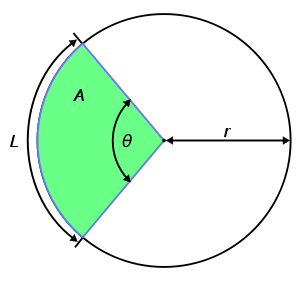 In geometry
Geometry
Geometry arose as the field of knowledge dealing with spatial relationships. Geometry was one of the two fields of pre-modern mathematics, the other being the study of numbers ....
, an arc is a closed
Closed set
In geometry, topology, and related branches of mathematics, a closed set is a set whose complement is an open set. In a topological space, a closed set can be defined as a set which contains all its limit points...
segment of a differentiable curve
Curve
In mathematics, a curve is, generally speaking, an object similar to a line but which is not required to be straight...
in the two-dimensional plane; for example, a circular arc is a segment of the circumference
Circumference
The circumference is the distance around a closed curve. Circumference is a special perimeter.-Circumference of a circle:The circumference of a circle is the length around it....
of a circle. If the arc is part of a great circle
Great circle
A great circle, also known as a Riemannian circle, of a sphere is the intersection of the sphere and a plane which passes through the center point of the sphere, as opposed to a general circle of a sphere where the plane is not required to pass through the center...
(or great ellipse
Great ellipse
left|150px|thumb|A [[spheroid]].A great ellipse is an ellipse passing through two points on a spheroid and having the same center as that of the spheroid. Equivalently,it is an ellipse on the surface of a cylinder centered at the origin....
), it is called a great arc.

The length
Arc length
Determining the length of an irregular arc segment is also called rectification of a curve. Historically, many methods were used for specific curves...
of an arc of a circle with radius

and subtending an angle

(measured in radian
Radian
Radian is the ratio between the length of an arc and its radius. The radian is the standard unit of angular measure, used in many areas of mathematics. The unit was formerly a SI supplementary unit, but this category was abolished in 1995 and the radian is now considered a SI derived unit...
s) with the circle center — i.e., the central angle
Central angle
A central angle is an angle which vertex is the center of a circle, and whose sides pass through a pair of points on the circle, thereby subtending an arc between those two points whose angle is equal to the central angle itself...
— equals

Substituting in the circumference

and solving for arc length,

degrees has a size in radians given by

and so the arc length equals

A practical way to determine the length of an arc in a circle is to plot two lines from the arc's endpoints to the center of the circle, measure the angle where the two lines meet the center, then solve for L by cross-multiplying the statement:

measure of angle
Angle
In geometry, an angle is the figure formed by two rays sharing a common endpoint, called the vertex of the angle.Angles are usually presumed to be in a Euclidean plane with the circle taken for standard with regard to direction. In fact, an angle is frequently viewed as a measure of an circular arc...
/360 = L/Circumference.

For example, if the measure of the angle is 60 degrees and the Circumference is 24", then

This is so because the circumference of a circle and the degrees of a circle, of which there are always 360, are directly proportionate.

The area between an arc and the center of a circle is:

has the same proportion to the circle area as the angle

to a full circle:

We can get rid of a

By multiplying both sides by

, we get the final result:

Using the conversion described above, we find that the area of the sector for a central angle measured in degrees is:

The area of the shape limited by the arc and a straight line between the two end points is:

. See Circular segment
Circular segment
In geometry, a circular segment is an area of a circle informally defined as an area which is "cut off" from the rest of the circle by a secant or a chord. The circle segment constitutes the part between the secant and an arc, excluding the circle's center...
for details.

of a circle given the height

of an arc using: