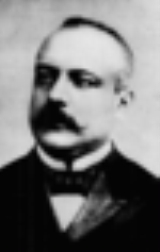 Encyclopedia
Antonio Salandra was a conservative
Conservatism
Conservatism is a political and social philosophy that promotes the maintenance of traditional institutions and supports, at the most, minimal and gradual change in society. Some conservatives seek to preserve things as they are, emphasizing stability and continuity, while others oppose modernism...
Italian
Italy
Italy , officially the Italian Republic languages]] under the European Charter for Regional or Minority Languages. In each of these, Italy's official name is as follows:;;;;;;;;), is a unitary parliamentary republic in South-Central Europe. To the north it borders France, Switzerland, Austria and...
politician who served as the 33rd Prime Minister of Italy
Prime minister of Italy
The Prime Minister of Italy is the head of government of the Italian Republic...
between 1914 and 1916. He graduated from the University of Naples
University of Naples Federico II
The University of Naples Federico II is a university located in Naples, Italy. It was founded in 1224 and is organized into 13 faculties. It is the world's oldest state university and one of the oldest academic institutions in continuous operation...
in 1875 and then became instructor and later professor
Professor
A professor is a scholarly teacher; the precise meaning of the term varies by country. Literally, professor derives from Latin as a "person who professes" being usually an expert in arts or sciences; a teacher of high rank...
of administrative law
Administrative law
Administrative law is the body of law that governs the activities of administrative agencies of government. Government agency action can include rulemaking, adjudication, or the enforcement of a specific regulatory agenda. Administrative law is considered a branch of public law...
at the University of Rome
University of Rome La Sapienza
The Sapienza University of Rome, officially Sapienza – Università di Roma, formerly known as Università degli studi di Roma "La Sapienza", is a coeducational, autonomous state university in Rome, Italy...
.

Born in Troia (Province of Foggia
Province of Foggia
The Province of Foggia is a province in the Apulia region of Italy.This province is also known as Capitanata, originally Catapanata, because during the Middle Ages it was governed by a catapan, as part of the Catapanate of Italy...
, Apulia
Apulia
Apulia is a region in Southern Italy bordering the Adriatic Sea in the east, the Ionian Sea to the southeast, and the Strait of Òtranto and Gulf of Taranto in the south. Its most southern portion, known as Salento peninsula, forms a high heel on the "boot" of Italy. The region comprises , and...
), Salandra was brought into the national cabinet upon the fall of the government of Giovanni Giolitti
Giovanni Giolitti
Giovanni Giolitti was an Italian statesman. He was the 19th, 25th, 29th, 32nd and 37th Prime Minister of Italy between 1892 and 1921. A left-wing liberal, Giolitti's periods in office were notable for the passage of a wide range of progressive social reforms which improved the living standards of...
, as the choice of Giolitti himself, who still commanded the support of most Italian parliamentarians. However, he soon fell out with Giolitti over the question of Italian participation in World War I
World War I
World War I , which was predominantly called the World War or the Great War from its occurrence until 1939, and the First World War or World War I thereafter, was a major war centred in Europe that began on 28 July 1914 and lasted until 11 November 1918...
. While Giolitti supported neutrality, Salandra and his foreign minister, Sidney Sonnino
Sidney Sonnino
Baron Sidney Costantino Sonnino was an Italian politician.Sonnino was born in Pisa to an Italian father of Jewish heritage and a Welsh mother...
, supported intervention on the side of the Allies, and secured Italy's entrance into the war despite the opposition of the majority in parliament. Salandra had expected that Italy's entrance on the allied side would bring the war to a quick solution, but in fact it changed little, and Italy's first year in the war was marked by only very limited success. Following the success of an Austrian offensive from the Trentino in the spring of 1916, Salandra was forced to resign.

After World War I, Salandra moved further to the right, and supported Mussolini's
Benito Mussolini
Benito Amilcare Andrea Mussolini was an Italian politician who led the National Fascist Party and is credited with being one of the key figures in the creation of Fascism....
accession to power in 1922. Nine years later he died in Rome.