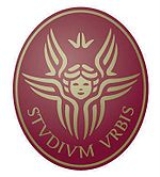 Encyclopedia
The Sapienza University of Rome, officially Sapienza – Università di Roma, formerly known as Università degli studi di Roma "La Sapienza", is a coeducational, autonomous state university in Rome
Rome
Rome is the capital of Italy and the country's largest and most populated city and comune, with over 2.7 million residents in . The city is located in the central-western portion of the Italian Peninsula, on the Tiber River within the Lazio region of Italy.Rome's history spans two and a half...
, Italy
Italy
Italy , officially the Italian Republic languages]] under the European Charter for Regional or Minority Languages. In each of these, Italy's official name is as follows:;;;;;;;;), is a unitary parliamentary republic in South-Central Europe. To the north it borders France, Switzerland, Austria and...
. It is the largest Europe
Europe
Europe is, by convention, one of the world's seven continents. Comprising the westernmost peninsula of Eurasia, Europe is generally 'divided' from Asia to its east by the watershed divides of the Ural and Caucasus Mountains, the Ural River, the Caspian and Black Seas, and the waterways connecting...
an university and the oldest of Rome's three state-funded universities; Sapienza was founded in 1303, more than six centuries before Tor Vergata
University of Rome Tor Vergata
The University of Rome Tor Vergata is a public university located in Rome, Italy. It is one of the largest research-based institutions in the country. The University is an international center for research and education and it is well known for scientific studies...
and Roma Tre
Third University of Rome
The University of Rome III also known as Roma Tre University is a public research university in the city of Rome, in the Lazio region of central Italy...
. In Italian
Italian language
Italian is a Romance language spoken mainly in Europe: Italy, Switzerland, San Marino, Vatican City, by minorities in Malta, Monaco, Croatia, Slovenia, France, Libya, Eritrea, and Somalia, and by immigrant communities in the Americas and Australia...
, sapienza means "wisdom" or "knowledge". According to the Academic Ranking of World Universities
Academic Ranking of World Universities
The Academic Ranking of World Universities , commonly known as the Shanghai ranking, is a publication that was founded and compiled by the Shanghai Jiaotong University to rank universities globally. The rankings have been conducted since 2003 and updated annually...
published by the Institute of Higher Education of Shanghai Jiao Tong University, Sapienza University of Rome ranks among the top 30 European universities. In 2010 QS World University Rankings
QS World University Rankings
The QS World University Rankings is a ranking of the world’s top 500 universities by Quacquarelli Symonds using a method that has published annually since 2004....
ranked the university 190th overall in the world. 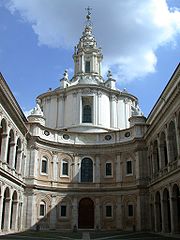 Sapienza University of Rome was founded as La Sapienza in 1303 with the bull
Papal bull
A Papal bull is a particular type of letters patent or charter issued by a Pope of the Catholic Church. It is named after the bulla that was appended to the end in order to authenticate it....
In supremae praeminentia dignitatis issued on 20 April 1303 by Pope Boniface VIII
Pope Boniface VIII
Pope Boniface VIII , born Benedetto Gaetani, was Pope of the Catholic Church from 1294 to 1303. Today, Boniface VIII is probably best remembered for his feuds with Dante, who placed him in the Eighth circle of Hell in his Divina Commedia, among the Simonists.- Biography :Gaetani was born in 1235 in...
, as a Studium for ecclesiastical studies more under his control than the universities of Bologna
University of Bologna
The Alma Mater Studiorum - University of Bologna is the oldest continually operating university in the world, the word 'universitas' being first used by this institution at its foundation. The true date of its founding is uncertain, but believed by most accounts to have been 1088...
and Padua
University of Padua
The University of Padua is a premier Italian university located in the city of Padua, Italy. The University of Padua was founded in 1222 as a school of law and was one of the most prominent universities in early modern Europe. It is among the earliest universities of the world and the second...
.

In 1431 Pope Eugene IV
Pope Eugene IV
Pope Eugene IV , born Gabriele Condulmer, was pope from March 3, 1431, to his death.-Biography:He was born in Venice to a rich merchant family, a Correr on his mother's side. Condulmer entered the Order of Saint Augustine at the monastery of St. George in his native city...
completely reorganized the studium with the bull In supremae, in which he granted masters and students alike the broadest possible privileges and decreed that the university should include the four faculties of Law, Medicine, Philosophy and Theology. He introduced a new tax on wine in order to raise funds for the university; the money was used to buy a palace which later housed the Sant'Ivo alla Sapienza
Sant'Ivo alla Sapienza
The Church of Saint Yves at La Sapienza is a Roman Catholic church in Rome. The church is considered a masterpiece of Roman Baroque church architecture, built in 1642-1660 by the architect Francesco Borromini.- History :...
church.

However the University's days of splendour came to an end during the sack of Rome
Sack of Rome (1527)
The Sack of Rome on 6 May 1527 was a military event carried out by the mutinous troops of Charles V, Holy Roman Emperor in Rome, then part of the Papal States...
in 1527 when the studium was closed and the professors dispersed; some were killed. Pope Paul III
Pope Paul III
Pope Paul III , born Alessandro Farnese, was Pope of the Roman Catholic Church from 1534 to his death in 1549. He came to the papal throne in an era following the sack of Rome in 1527 and rife with uncertainties in the Catholic Church following the Protestant Reformation...
restored the university shortly after his ascension to the pontificate in 1534.
In the 1650s the university became known as Sapienza, meaning wisdom, a title it retains. In 1703 Pope Clement XI
Pope Clement XI
Pope Clement XI , born Giovanni Francesco Albani, was Pope from 1700 until his death in 1721.-Early life:...
purchased some land with his private funds on the Janiculum
Janiculum
The Janiculum is a hill in western Rome, Italy. Although the second-tallest hill in the contemporary city of Rome, the Janiculum does not figure among the proverbial Seven Hills of Rome, being west of the Tiber and outside the boundaries of the ancient city.-Sights:The Janiculum is one of the...
, where he made a botanical garden, which soon became the most celebrated in Europe through the labours of the Trionfetti brothers.

As of the 2007-2008 academic year the Sapienza University of Rome possesses twenty-one faculties and 140,250 students. The Alessandrina University Library (Biblioteca Universitaria Alessandrina), built in 1667 by Pope Alexander VII
Pope Alexander VII
Pope Alexander VII , born Fabio Chigi, was Pope from 7 April 1655, until his death.- Early life :Born in Siena, a member of the illustrious banking family of Chigi and a great-nephew of Pope Paul V , he was privately tutored and eventually received doctorates of philosophy, law, and theology from...
, is the main library housing 1.5 million volumes; it has some important collections including collezione ciceroniana, Fondo Festa, etc. Sapienza University has many campuses in Rome but its main campus is the Città Universitaria, which covers 439,000 square metres near Termini Station. The university has four satellite campuses outside Rome, in Civitavecchia
Civitavecchia
Civitavecchia is a town and comune of the province of Rome in the central Italian region of Lazio. A sea port on the Tyrrhenian Sea, it is located 80 kilometers west-north-west of Rome, across the Mignone river. The harbor is formed by two piers and a breakwater, on which is a lighthouse...
, Latina
Latina
Latina is the feminine form of the term Latino.Latina may also refer to:*Province of Latina, a province in Latium , Italy**Latina, Lazio, the capital of the province of Latina**Latina Nuclear Power Plant*Latina , a district of Madrid...
, Pomezia
Pomezia
Pomezia is a municipality in the province of Rome, Lazio, central Italy. In 2009 it had a population of about 60,000.-History:The town was built entirely new near the location of ancient Lavinium on land resulting from the final reclamation of the Pontine Marshes under Benito Mussolini, being...
and Rieti
Rieti
Rieti is a city and comune in Lazio, central Italy, with a population of c. 47,700. It is the capital of province of Rieti.The town centre rests on a small hilltop, commanding a wide plain at the southern edge of an ancient lake. The area is now the fertile basin of the Velino River...
.

Today Sapienza is by far the largest university in Rome, a leading centre of research and academic excellence in all fields of knowledge. In order to cope with the ever-increasing number of applicants, the Rector has approved a new plan to expand the Città Universitaria, reallocate offices and enlarge faculties, as well as create new campuses for hosting local and foreign students, in collaboration with the city of Rome. The university has improved its research programmes in the fields of engineering
Engineering
Engineering is the discipline, art, skill and profession of acquiring and applying scientific, mathematical, economic, social, and practical knowledge, in order to design and build structures, machines, devices, systems, materials and processes that safely realize improvements to the lives of...
, natural sciences, biomedical sciences and humanities
Humanities
The humanities are academic disciplines that study the human condition, using methods that are primarily analytical, critical, or speculative, as distinguished from the mainly empirical approaches of the natural sciences....
through the "Sapienza Innovation" programme. Recent cooperation with major British and American universities has resulted in scholarships for Sapienza students through large multicultural exchange programmes, for many faculties.

In order to cope with the large demand for admission to the university courses, some faculties hold a series of entrance examinations. The "SiOrienta" http://siorienta.cabi.uniroma1.it/ programme guides students of natural and mathematical sciences as well as the ones belonging the engineering department through the entire admission procedure. The entrance test often decides which candidates will have access to the undergraduate course. For other faculties, the entrance test is only a means through which the administration acknowledges the students' level of preparation. Weak students that haven't passed the test will be enrolled in a number of extra-curriculum preparation courses.
Many other faculties don't make use of any entrance test and others use it only as an aptitudinal test.

The university is divided into 11 faculties:

There are 5 Atenei federati, 2 Scuole, and over 30 Centri di Ricerca e studio: