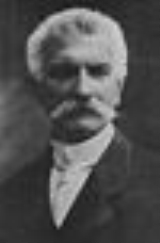 Encyclopedia
Baron
Baron
Baron is a title of nobility. The word baron comes from Old French baron, itself from Old High German and Latin baro meaning " man, warrior"; it merged with cognate Old English beorn meaning "nobleman"...
Sidney Costantino Sonnino (11 March 1847 – 24 November 1922) was an Italian
Italy
Italy , officially the Italian Republic languages]] under the European Charter for Regional or Minority Languages. In each of these, Italy's official name is as follows:;;;;;;;;), is a unitary parliamentary republic in South-Central Europe. To the north it borders France, Switzerland, Austria and...
politician
Politician
A politician, political leader, or political figure is an individual who is involved in influencing public policy and decision making...
.

Sonnino was born in Pisa
Pisa
Pisa is a city in Tuscany, Central Italy, on the right bank of the mouth of the River Arno on the Tyrrhenian Sea. It is the capital city of the Province of Pisa...
to an Italian father of Jewish
Judaism
Judaism ) is the "religion, philosophy, and way of life" of the Jewish people...
heritage (Isach Sonnino, who converted himself to Anglicanism
Anglicanism
Anglicanism is a tradition within Christianity comprising churches with historical connections to the Church of England or similar beliefs, worship and church structures. The word Anglican originates in ecclesia anglicana, a medieval Latin phrase dating to at least 1246 that means the English...
) and a Welsh
Wales
Wales is a country that is part of the United Kingdom and the island of Great Britain, bordered by England to its east and the Atlantic Ocean and Irish Sea to its west. It has a population of three million, and a total area of 20,779 km²...
mother. He was raised as a Protestant.

In 1876, Sonnino traveled to Sicily with Leopoldo Franchetti
Leopoldo Franchetti
Leopoldo Franchetti , was an Italian publicist and politician. He was a deputy in the Italian Chamber of Deputies and later became a Senator...
to conduct a private investigation into the state of Sicilian society. In 1877, the two men published their research on Sicily in a substantial two-part report for the Italian Parliament. In the first part Sonnino analysed the lives of the island's landless peasants. Leopoldo Franchetti's half of the report, Political and Administrative Conditions in Sicily, was an analysis of the Mafia
Mafia
The Mafia is a criminal syndicate that emerged in the mid-nineteenth century in Sicily, Italy. It is a loose association of criminal groups that share a common organizational structure and code of conduct, and whose common enterprise is protection racketeering...
in the nineteenth century that is still considered authoritative today. Franchetti would ultimately influence thinking about the Mafia more than anyone else until Giovanni Falcone
Giovanni Falcone
Giovanni Falcone was an Sicilian/Italian prosecuting magistrate born in Palermo, Sicily. From his office in the Palace of Justice in Palermo, he spent most of his professional life trying to overthrow the power of the Mafia in Sicily...
over a hundred years later. Political and Administrative Conditions in Sicily is the first convincing explanation of how the Mafia came to be.

In 1878, Sonnino started a newspaper (La Rassegna Settimanale), which changed from weekly economical reviews to daily political issues. In 1893, after working in several governmental positions, he became finance minister of Italy. He worked in the opposition after the fall of his party from power as a result of the lost Battle of Adwa. He served twice briefly as Prime Minister, in 1906 and again from 1909 to 1910. On April 16, 1909 Sonnino and Wilbur Wright went on a flight at Centocelle field, Rome, making Sonnino one of the earliest of statesmen to fly in an airplane.

After the events in 1914
World War I
World War I , which was predominantly called the World War or the Great War from its occurrence until 1939, and the First World War or World War I thereafter, was a major war centred in Europe that began on 28 July 1914 and lasted until 11 November 1918...
, Sonnino was initially supportive to the side of Germany
Germany
Germany , officially the Federal Republic of Germany , is a federal parliamentary republic in Europe. The country consists of 16 states while the capital and largest city is Berlin. Germany covers an area of 357,021 km2 and has a largely temperate seasonal climate...
and Austria-Hungary
Austria-Hungary
Austria-Hungary , more formally known as the Kingdoms and Lands Represented in the Imperial Council and the Lands of the Holy Hungarian Crown of Saint Stephen, was a constitutional monarchic union between the crowns of the Austrian Empire and the Kingdom of Hungary in...
, but after becoming foreign minister in November 1914, he sided with the Allied forces, and signed the Treaty of London in 1915. Italy consequently declared war on Austria-Hungary on May 23, 1915.