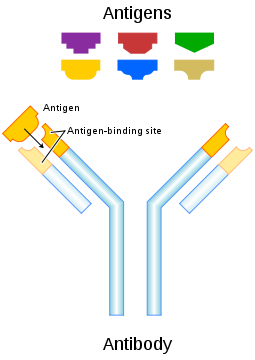 An antigen is a foreign molecule that, when introduced into the body, triggers the production of an antibody
Antibody
An antibody, also known as an immunoglobulin, is a large Y-shaped protein used by the immune system to identify and neutralize foreign objects such as bacteria and viruses. The antibody recognizes a unique part of the foreign target, termed an antigen...
by the immune system
Immune system
An immune system is a system of biological structures and processes within an organism that protects against disease by identifying and killing pathogens and tumor cells. It detects a wide variety of agents, from viruses to parasitic worms, and needs to distinguish them from the organism's own...
. The immune system will then kill or neutralize the antigen that is recognized as a foreign and potentially harmful invader. These invaders can be molecules such as pollen or cells such as bacteria. The term originally came from antibody generator and was a molecule that binds specifically to an antibody, but the term now also refers to any molecule or molecular fragment that can be bound by a major histocompatibility complex
Major histocompatibility complex
Major histocompatibility complex is a cell surface molecule encoded by a large gene family in all vertebrates. MHC molecules mediate interactions of leukocytes, also called white blood cells , which are immune cells, with other leukocytes or body cells...
(MHC) and presented to a T-cell receptor. "Self" antigens are usually tolerated by the immune system; whereas "Non-self" antigens are identified as invaders and attacked by the immune system.

At the molecular level, an antigen is characterized by its ability to be "bound" at the antigen-binding site of an antibody. Note also that antibodies tend to discriminate between the specific molecular structures
Epitope
An epitope, also known as antigenic determinant, is the part of an antigen that is recognized by the immune system, specifically by antibodies, B cells, or T cells. The part of an antibody that recognizes the epitope is called a paratope...
presented on the surface of the antigen (as illustrated in the Figure). Antigens are usually protein
Protein
Proteins are biochemical compounds consisting of one or more polypeptides typically folded into a globular or fibrous form, facilitating a biological function. A polypeptide is a single linear polymer chain of amino acids bonded together by peptide bonds between the carboxyl and amino groups of...
s or polysaccharide
Polysaccharide
Polysaccharides are long carbohydrate molecules, of repeated monomer units joined together by glycosidic bonds. They range in structure from linear to highly branched. Polysaccharides are often quite heterogeneous, containing slight modifications of the repeating unit. Depending on the structure,...
s. This includes parts (coats, capsules, cell walls, flagella, fimbrae, and toxins) of bacteria
Bacteria
Bacteria are a large domain of prokaryotic microorganisms. Typically a few micrometres in length, bacteria have a wide range of shapes, ranging from spheres to rods and spirals...
, virus
Virus
A virus is a small infectious agent that can replicate only inside the living cells of organisms. Viruses infect all types of organisms, from animals and plants to bacteria and archaea...
es, and other microorganism
Microorganism
A microorganism or microbe is a microscopic organism that comprises either a single cell , cell clusters, or no cell at all...
s. Lipid
Lipid
Lipids constitute a broad group of naturally occurring molecules that include fats, waxes, sterols, fat-soluble vitamins , monoglycerides, diglycerides, triglycerides, phospholipids, and others...
s and nucleic acid
Nucleic acid
Nucleic acids are biological molecules essential for life, and include DNA and RNA . Together with proteins, nucleic acids make up the most important macromolecules; each is found in abundance in all living things, where they function in encoding, transmitting and expressing genetic information...
s are antigenic only when combined with proteins and polysaccharides. Non-microbial exogenous (non-self) antigens can include pollen, egg white, and proteins from transplanted tissues and organs or on the surface of transfused blood cells. Vaccine
Vaccine
A vaccine is a biological preparation that improves immunity to a particular disease. A vaccine typically contains an agent that resembles a disease-causing microorganism, and is often made from weakened or killed forms of the microbe or its toxins...
s are examples of immunogenic antigens intentionally administered to induce acquired immunity
Adaptive immune system
The adaptive immune system is composed of highly specialized, systemic cells and processes that eliminate or prevent pathogenic growth. Thought to have arisen in the first jawed vertebrates, the adaptive or "specific" immune system is activated by the “non-specific” and evolutionarily older innate...
in the recipient.

Origin of the term antigen

In 1899, Ladislas Deutsch (Laszlo Detre) (1874–1939) named the hypothetical substances halfway between bacterial constituents and antibodies "substances immunogenes ou antigenes". He originally believed those substances to be precursors of antibodies, just like zymogen
Zymogen
A zymogen is an inactive enzyme precursor. A zymogen requires a biochemical change for it to become an active enzyme. The biochemical change usually occurs in a lysosome where a specific part of the precursor enzyme is cleaved in order to activate it...
is a precursor of an enzyme. But, by 1903, he understood that an antigen induces the production of immune bodies (antibodies) and wrote that the word antigen is a contraction of "Antisomatogen = Immunkörperbildner". The Oxford English Dictionary indicates that the logical construction should be "anti(body)-gen".

Exogenous antigens are antigens that have entered the body from the outside, for example by inhalation
Inhalation
Inhalation is the movement of air from the external environment, through the air ways, and into the alveoli....
, ingestion
Ingestion
Ingestion is the consumption of a substance by an organism. In animals, it normally is accomplished by taking in the substance through the mouth into the gastrointestinal tract, such as through eating or drinking...
, or injection
Injection (medicine)
An injection is an infusion method of putting fluid into the body, usually with a hollow needle and a syringe which is pierced through the skin to a sufficient depth for the material to be forced into the body...
. The immune system's response to exogenous antigens is often subclinical. By endocytosis
Endocytosis
Endocytosis is a process by which cells absorb molecules by engulfing them. It is used by all cells of the body because most substances important to them are large polar molecules that cannot pass through the hydrophobic plasma or cell membrane...
or phagocytosis, exogenous antigens are taken into the antigen-presenting cell
Antigen-presenting cell
An antigen-presenting cell or accessory cell is a cell that displays foreign antigen complexes with major histocompatibility complex on their surfaces. T-cells may recognize these complexes using their T-cell receptors...
s (APCs) and processed into fragments. APCs then present the fragments to T helper cells (CD4
CD4
CD4 is a glycoprotein expressed on the surface of T helper cells, monocytes, macrophages, and dendritic cells. It was discovered in the late 1970s and was originally known as leu-3 and T4 before being named CD4 in 1984...
+) by the use of class II histocompatibility
MHC class II
MHC Class II molecules are found only on a few specialized cell types, including macrophages, dendritic cells and B cells, all of which are professional antigen-presenting cells ....
molecules on their surface. Some T cells are specific for the peptide:MHC complex. They become activated and start to secrete cytokine
Cytokine
Cytokines are small cell-signaling protein molecules that are secreted by the glial cells of the nervous system and by numerous cells of the immune system and are a category of signaling molecules used extensively in intercellular communication...
s. Cytokines are substances that can activate cytotoxic T lymphocytes (CTL), antibody-secreting B cells, macrophages, and other particles.

Some antigens start out as exogenous antigens, and later become endogenous (for example, intracellular viruses). Intracellular antigens can be released back into circulation upon the destruction of the infected cell, again.

Endogenous antigens are antigens that have been generated within previously-normal cells as a result of normal cell metabolism
Metabolism
Metabolism is the set of chemical reactions that happen in the cells of living organisms to sustain life. These processes allow organisms to grow and reproduce, maintain their structures, and respond to their environments. Metabolism is usually divided into two categories...
, or because of viral or intracellular bacterial infection
Infection
An infection is the colonization of a host organism by parasite species. Infecting parasites seek to use the host's resources to reproduce, often resulting in disease...
. The fragments are then presented on the cell surface in the complex with MHC class I
MHC class I
MHC class I molecules are one of two primary classes of major histocompatibility complex molecules and are found on every nucleated cell of the body...
molecules. If activated cytotoxic CD8+ T cells
Cytotoxic T cell
A cytotoxic T cell belongs to a sub-group of T lymphocytes that are capable of inducing the death of infected somatic or tumor cells; they kill cells that are infected with viruses , or are otherwise damaged or...
recognize them, the T cells begin to secrete various toxin
Toxin
A toxin is a poisonous substance produced within living cells or organisms; man-made substances created by artificial processes are thus excluded...
s that cause the lysis
Lysis
Lysis refers to the breaking down of a cell, often by viral, enzymic, or osmotic mechanisms that compromise its integrity. A fluid containing the contents of lysed cells is called a "lysate"....
or apoptosis
Apoptosis
Apoptosis is the process of programmed cell death that may occur in multicellular organisms. Biochemical events lead to characteristic cell changes and death. These changes include blebbing, cell shrinkage, nuclear fragmentation, chromatin condensation, and chromosomal DNA fragmentation...
of the infected cell. In order to keep the cytotoxic cells from killing cells just for presenting self-proteins, self-reactive T cells are deleted from the repertoire as a result of tolerance
Central tolerance
Central tolerance is the mechanism by which newly developing T cells and B cells are rendered non-reactive to self. The concept of central tolerance was proposed in 1959 by Joshua Lederberg, as part of his general theory of immunity and tolerance, and is often mistakenly attributed to MacFarlane...
(also known as negative selection). Endogenous antigens include xenogenic (heterologous), autologous and idiotypic
Idiotype
In immunology, an idiotype is a shared characteristic between a group of immunoglobulin or T cell receptor molecules based upon the antigen binding specificity and therefore structure of their variable region...
or allogenic
Immunoglobulin allotype
In immunology, an immunoglobulin allotype is the allele of the antibody chains found in the individual.To reduce risk of transplant rejection, tissue typing is used to try to match donors and recipients with the same or similar allotypes....
(homologous) antigens.

An autoantigen is usually a normal protein or complex of proteins (and sometimes DNA or RNA) that is recognized by the immune system of patients suffering from a specific autoimmune disease
Autoimmune disease
Autoimmune diseases arise from an overactive immune response of the body against substances and tissues normally present in the body. In other words, the body actually attacks its own cells. The immune system mistakes some part of the body as a pathogen and attacks it. This may be restricted to...
. These antigens should, under normal conditions, not be the target of the immune system, but, due to mainly genetic and environmental factors, the normal immunological tolerance for such an antigen has been lost in these patients.

Tumor antigens can also be on the surface of the tumor in the form of, for example, a mutated receptor, in which case they will be recognized by B cells.

Antigen(ic) specificity is the ability of the host cells to recognize an antigen specifically as a unique molecular entity and distinguish it from another with exquisite precision. Antigen specificity is due primarily to the side-chain conformations of the antigen. It is a measurement, although the degree of specificity may not be easy to measure, and need not be linear or of the nature of a rate-limited step or equation.