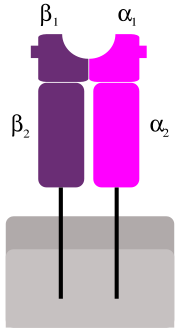 MHC Class II molecules are found only on a few specialized cell types, including macrophage
Macrophage
Macrophages are cells produced by the differentiation of monocytes in tissues. Human macrophages are about in diameter. Monocytes and macrophages are phagocytes. Macrophages function in both non-specific defense as well as help initiate specific defense mechanisms of vertebrate animals...
s, dendritic cell
Dendritic cell
Dendritic cells are immune cells forming part of the mammalian immune system. Their main function is to process antigen material and present it on the surface to other cells of the immune system. That is, dendritic cells function as antigen-presenting cells...
s and B cells, all of which are professional antigen-presenting cells (APCs).

Loading of class II molecules must still occur inside the cell; extracellular proteins are endocytosed
Endocytosis
Endocytosis is a process by which cells absorb molecules by engulfing them. It is used by all cells of the body because most substances important to them are large polar molecules that cannot pass through the hydrophobic plasma or cell membrane...
, digested in lysosome
Lysosome
thumb|350px|Schematic of typical animal cell, showing subcellular components. [[Organelle]]s: [[nucleoli]] [[cell nucleus|nucleus]] [[ribosomes]] [[vesicle |vesicle]] rough [[endoplasmic reticulum]]...
s, and bound by the class II MHC molecule prior to the molecule's migration to the plasma membrane.

Like MHC class I
MHC class I
MHC class I molecules are one of two primary classes of major histocompatibility complex molecules and are found on every nucleated cell of the body...
molecules, class II molecules are also heterodimers, but in this case consist of two homologous peptides, an α and β chain, both of which are encoded in the MHC. The subdesignation α1, α2, etc refers to separate domains within the HLA gene; each domain is usually encoded by a different exon within the gene, and some genes have further domains that encode leader sequences, transmembrane sequences, etc.

Because the antigen-binding groove of MHC class II molecules is open at both ends while the corresponding groove on class I molecules is closed at each end, the antigens presented by MHC class II molecules are longer, generally between 15 and 24 amino acid
Amino acid
Amino acids are molecules containing an amine group, a carboxylic acid group and a side-chain that varies between different amino acids. The key elements of an amino acid are carbon, hydrogen, oxygen, and nitrogen...
residues long.

Because class II MHC is loaded with extracellular proteins, it is mainly concerned with presentation of extracellular pathogens (for example, bacteria that might be infecting a wound or the blood). Class II molecules interact exclusively with CD4
CD4
CD4 is a glycoprotein expressed on the surface of T helper cells, monocytes, macrophages, and dendritic cells. It was discovered in the late 1970s and was originally known as leu-3 and T4 before being named CD4 in 1984...
+ ("helper") T cells (TH2). The helper T cells
T helper cell
T helper cells are a sub-group of lymphocytes, a type of white blood cell, that play an important role in the immune system, particularly in the adaptive immune system. These cells have no cytotoxic or phagocytic activity; they cannot kill infected host cells or pathogens. Rather, they help other...
then help to trigger an appropriate immune response which may include localized inflammation
Inflammation
Inflammation is part of the complex biological response of vascular tissues to harmful stimuli, such as pathogens, damaged cells, or irritants. Inflammation is a protective attempt by the organism to remove the injurious stimuli and to initiate the healing process...
and swelling due to recruitment of phagocytes or may lead to a full-force antibody immune response due to activation of B cell
B cell
B cells are lymphocytes that play a large role in the humoral immune response . The principal functions of B cells are to make antibodies against antigens, perform the role of antigen-presenting cells and eventually develop into memory B cells after activation by antigen interaction...
s.

During synthesis of class II MHC in the endoplasmic reticulum, the α and β chains are produced and complexed with a special polypeptide known as the invariant chain. The nascent MHC class II protein in the rough ER has its peptide-binding cleft blocked by the invariant chain (Ii; a trimer) to prevent it from binding cellular peptides or peptides from the endogenous pathway (such as those that would be loaded onto class I MHC).