Encyclopedia
The American Bridge Company is a privately held civil engineering
Civil engineering
Civil engineering is a professional engineering discipline that deals with the design, construction, and maintenance of the physical and naturally built environment, including works like roads, bridges, canals, dams, and buildings...
firm specializing in the construction and renovation of bridge
Bridge
A bridge is a structure built to span physical obstacles such as a body of water, valley, or road, for the purpose of providing passage over the obstacle...
s and other large civil engineering projects, founded in 1900, and headquartered in Coraopolis, Pennsylvania
Coraopolis, Pennsylvania
Coraopolis is a borough in Allegheny County, Pennsylvania, USA. The population was 5,677 at the 2010 census. In 1940 the population peaked at 11,086. It is a small community located to the west of Pittsburgh, along the Ohio River and to the east of the Pittsburgh International Airport...
, a suburb of Pittsburgh.

The firm has built many bridges in the U.S. and elsewhere, with Historic American Engineering Record this listing (at the Library of Congress
Library of Congress
The Library of Congress is the research library of the United States Congress, de facto national library of the United States, and the oldest federal cultural institution in the United States. Located in three buildings in Washington, D.C., it is the largest library in the world by shelf space and...
) noting at least 81. A partial listing of projects is below. The firm is listed as the builder of a project but may not necessarily be (and usually is not) the designer. In most cases the bridge designer or building architect does not get to select the construction company, he designs it but then bids are let by the owners/developers. The designer and the contractor have to subsequently work together closely to get the job done.

American Bridge has also been involved in significant building construction projects such as the Willis Tower, the Empire State Building
Empire State Building
The Empire State Building is a 102-story landmark skyscraper and American cultural icon in New York City at the intersection of Fifth Avenue and West 34th Street. It has a roof height of 1,250 feet , and with its antenna spire included, it stands a total of 1,454 ft high. Its name is derived...
and the Chrysler Building
Chrysler Building
The Chrysler Building is an Art Deco style skyscraper in New York City, located on the east side of Manhattan in the Turtle Bay area at the intersection of 42nd Street and Lexington Avenue. Standing at , it was the world's tallest building for 11 months before it was surpassed by the Empire State...
, as well as in other structural projects such as launch pads and resorts.

Significant competitors include Walsh Group, Flatiron Construction, and Skanska USA
Skanska
Skanska AB, is a multinational construction and development company based in Sweden, where it also is the largest construction company. The company's head office is in Solna, north of Stockholm.-History:...
.

The company has a long and storied history. While American Bridge’s roots in steel fabrication and construction remain a strength today, the company developed broad based contracting and management resources to service complex project needs. Some of American Bridge’s most notable projects are more a testament to construction engineering know how and management abilities than to its historical strength in steel construction. The company pioneered the use of steel as a construction material; developing the means & methods for fabrication and construction that allowed it to be widely used in buildings, bridges, vessels, and other plate applications. As a result, and due to its deep financial resources, American Bridge has operated on a national and international scale from the moment of its inception.

American Bridge produced a number of ships for the United States Navy
United States Navy
The United States Navy is the naval warfare service branch of the United States Armed Forces and one of the seven uniformed services of the United States. The U.S. Navy is the largest in the world; its battle fleet tonnage is greater than that of the next 13 largest navies combined. The U.S...
as part of the war effort during World War II
World War II
World War II, or the Second World War , was a global conflict lasting from 1939 to 1945, involving most of the world's nations—including all of the great powers—eventually forming two opposing military alliances: the Allies and the Axis...
. The town of Ambridge, Pennsylvania
Ambridge, Pennsylvania
Ambridge is a borough in Beaver County in Western Pennsylvania, incorporated in 1905 and named after the American Bridge Company. Ambridge is located 16 miles northwest of Pittsburgh, alongside the Ohio River. In 1910, 5,205 people lived in Ambridge; in 1920, 12,730 people lived there, and in...
was an American Bridge Company town
Company town
A company town is a town or city in which much or all real estate, buildings , utilities, hospitals, small businesses such as grocery stores and gas stations, and other necessities or luxuries of life within its borders are owned by a single company...
(thus the name "Ambridge"), and is near their current headquarters of Coraopolis, Pennsylvania
Coraopolis, Pennsylvania
Coraopolis is a borough in Allegheny County, Pennsylvania, USA. The population was 5,677 at the 2010 census. In 1940 the population peaked at 11,086. It is a small community located to the west of Pittsburgh, along the Ohio River and to the east of the Pittsburgh International Airport...
. Both municipalities are located on the Ohio River near Pittsburgh, Pennsylvania
Pittsburgh, Pennsylvania
Pittsburgh is the second-largest city in the US Commonwealth of Pennsylvania and the county seat of Allegheny County. Regionally, it anchors the largest urban area of Appalachia and the Ohio River Valley, and nationally, it is the 22nd-largest urban area in the United States...
, with access to many steel suppliers, as well as to waterborne and rail transport, to allow shipment of components and subassemblies.

American Bridge has come under criticism for its role in the Discovery Land Company's 'Baker's Bay Golf & Ocean Club' in the Bahamas. American Bridge is responsible for construction activities in a highly sensitive mangrove and coral reef area of Great Guana Cay, a barrier island of Abaco. The project is now opposed by the Sierra Club, Ocean Futures Society and dozens of conservation groups around the world. The local indigenous natives of Great Guana Cay have created a powerful opposition to the construction activities, often bringing construction to a halt through the Bahamian Supreme Court and U.K. Privy Council. 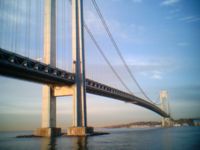