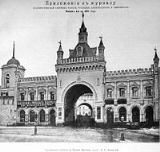 Encyclopedia
Alexander Stepanovich Kaminsky (1829–1897, , sometimes spelled Kamensky, Каменский) was a Russian
Russians
The Russian people are an East Slavic ethnic group native to Russia, speaking the Russian language and primarily living in Russia and neighboring countries....
architect working in Moscow
Moscow
Moscow is the capital, the most populous city, and the most populous federal subject of Russia. The city is a major political, economic, cultural, scientific, religious, financial, educational, and transportation centre of Russia and the continent...
and suburbs. One of the most successul and prolific architects of 1860s - 1880s, Kaminsky was a faithful eclecticist
Eclecticism
Eclecticism is a conceptual approach that does not hold rigidly to a single paradigm or set of assumptions, but instead draws upon multiple theories, styles, or ideas to gain complementary insights into a subject, or applies different theories in particular cases.It can sometimes seem inelegant or...
, equally skilled in Russian Revival
Russian Revival
The Russian Revival style is the generic term for a number of different movements within Russian architecture that arose in second quarter of the 19th century and was an eclectic melding of pre-Peterine Russian architecture and elements of Byzantine architecture.The Russian Revival style arose...
, Neo-Gothic and Renaissance Revival architecture. He is best remembered for the extant Tretyakovsky Proyezd
Tretyakovsky Proyezd
Tretyakov Drive is a short street with boutiques and shops with many luxury goods located in Kitai-gorod in Moscow and known as one of the most expensive shopping areas in the world....
shopping arcade and the cathedral of Nikolo-Ugresh monastery
Nikolo-Ugresh monastery
Nikolo-Ugreshsky Monastery is a walled stauropegic Russian Orthodox monastery of St. Nicholas the Miracle-Worker located in a suburb of Moscow formerly known as Ugreshi and now called Dzerzhinsky...
in present-day town of Dzerzhinsky
Dzerzhinsky (town)
Dzerzhinsky is a town in Moscow Oblast, Russia, located on the bank of the Moskva River, south of the city of Lyubertsy. The western part of Dzerzhinsky is bordered on Moscow. Population: Lyubertsy–Dzerzhinsky railway is used for cargo transportation only...
.

Kaminsky was born in a noble family in Kiev Governorate
Kiev Governorate
Kiev Governorate , or Government of Kiev, was an administrative division of the Russian Empire.The governorate was established in 1708 along with seven other governorates and was transformed into a viceroyalty in 1781...
. In 1848-1857 he studied architecture under Konstantin Thon
Konstantin Thon
Konstantin Andreyevich Thon, also spelled Ton was an official architect of Imperial Russia during the reign of Nicholas I. His major works include the Cathedral of Christ the Saviour, the Grand Kremlin Palace and the Kremlin Armoury in Moscow....
at the Imperial Academy of Arts
Imperial Academy of Arts
The Russian Academy of Arts, informally known as the St. Petersburg Academy of Arts, was founded in 1757 by Ivan Shuvalov under the name Academy of the Three Noblest Arts. Catherine the Great renamed it the Imperial Academy of Arts and commissioned a new building, completed 25 years later in 1789...
in Saint Petersburg
Saint Petersburg
Saint Petersburg is a city and a federal subject of Russia located on the Neva River at the head of the Gulf of Finland on the Baltic Sea...
; meanwhile Alexander's brother, Joseph Kaminsky, was a construction manager for Thon's Cathedral of Christ the Saviour
Cathedral of Christ the Saviour (Moscow)
The Cathedral of Christ the Saviour is a Church in Moscow, Russia, on the northern bank of the Moskva River, a few blocks south-west of the Kremlin...
in Moscow
Moscow
Moscow is the capital, the most populous city, and the most populous federal subject of Russia. The city is a major political, economic, cultural, scientific, religious, financial, educational, and transportation centre of Russia and the continent...
. Alexander served as a liaison between Petersburg-based Thon and Moscow crews, acquiring his first practical experience.

In 1857, Kaminsky won a state-paid postgraduate tour of Europe, and travelled extensively until 1861. In Paris
Paris
Paris is the capital and largest city in France, situated on the river Seine, in northern France, at the heart of the Île-de-France region...
, he met Pavel Tretyakov
Pavel Tretyakov
Pavel Mikhaylovich Tretyakov was a Russian businessman, patron of art, collector, and philanthropist who gave his name to the Tretyakov Gallery and Tretyakov Drive in Moscow. His brother S.M. Tretyakov was also a famous patron of art and a philanthropist....
, a young member of an influential Muscovite business family and an art collector. Back in Moscow, friendship with Tretyakovs resulted in his first independent commissions. Next year, Alexander married Sophia, sister of Pavel Tretyakov; he remained Tretyakov's house architect until the end of his career.

Since 1867, Kaminsky was also a house architect for Moscow Merchant Society, an ambitious real estate consortium that redeveloped territories of Kitai-Gorod
Kitai-gorod
Kitay-gorod , earlier also known as Great Posad , is a business district within Moscow, Russia, encircled by mostly-reconstructed medieval walls. It is separated from the Moscow Kremlin by Red Square. It does not constitute a district , as there are no resident voters, thus, municipal elections...
, Neglinnaya Street
Neglinnaya Street
Neglinnaya Street is a street inside the Garden Ring of Moscow, Russia. It runs from the Bolshoi Theatre to the Trubnaya Square. The street was paved over the underground Neglinnaya River in 1819. Throughout the 20th century the river regularly flooded the street and the adjacent quarter...
. His best known jobs for the Merchant Society were its own Neglinnaya Street offices and rebuilding the Exchange Builsing in Ilyinka Street. Rebuilding of historical buildings became a common work for Kaminsky, but he also built traditional, spacious town estates (Chetverikov Estate in Kolpachny Lane, Karatayeva-Morozova Estate in Leontyevsky Lane, etc.) and public buildings. Kaminsky was a true and accomplished ecclecticist, never leaning to a particular style. Like Thon, he picked styling depending on the building functions and the client's budget.

For about thirty years, Kaminsky was teaching at the Moscow School of Painting, Sculpture and Architecture
Moscow School of Painting, Sculpture and Architecture
The Moscow School of Painting, Sculpture and Architecture was one of the largest educational institutions in Russia. The school was formed by the 1865 merger of a private art college, established in Moscow in 1832, and the Palace School of Architecture, established in 1749 by Dmitry Ukhtomsky. By...
and training its graduates within his firm (his alumni include Fyodor Schechtel
Fyodor Schechtel
Fyodor Osipovich Schechtel was a Russian architect, graphic artist and stage designer, the most influential and prolific master of Russian Art Nouveau and late Russian Revival....
, Ivan Mashkov
Ivan Mashkov
Ivan Pavlovich Mashkov was a Russian architect and preservationist, notable for surveying and restoration of Dormition Cathedral of Moscow Kremlin, Novodevichy Convent and other medieval buildings. His best known extant building is Sokol luxury Art Nouveau apartment building in Kuznetsky Most...
, Ilya Bondarenko
Ilya Bondarenko
Ilya Yevgrafovich Bondarenko was a Russian-Soviet architect, historian and preservationist, notable for developing a particular style of Old Believers architecture in 1905-1917, blending Northern Russian revival with Art Nouveau.-Education and early works:...
, Max Hoeppener).

Architect's career was cut short in 1888 when a Kuznetsky Most
Kuznetsky Most
Kuznetsky Most is a street in central Moscow, that runs from Bolshaya Dmitrovka Street to Lubyanka Street. The name, literally Blacksmith's Bridge, refers to the 18th century bridge over Neglinnaya River, now running in an underground tunnel, and a nearby foundry and the settlement of its workers...
building, erected by his firm, collapsed. Kaminsky was found guilty of criminal negligence and sentenced to six weeks of arrest. Professional agony dragged for another five years. Saving his reputation, Kaminsky founded and edited a magazine , promoting his own works; he ultimately failed to return into the business, lost the job with Merchant Society in 1893 and died in 1897. His last work, a church in Sarov
Sarov
Sarov is a closed town in Nizhny Novgorod Oblast, Russia. Until 1995 it was known as Kremlyov ., while from 1946 to 1991 it was called Arzamas-16 . The town is off limits to foreigners as it is the Russian center for nuclear research. Population: -History:The history of the town can be divided...
, was completed in 1903.