Tretyakov Drive is a short street with boutiques and shops with many luxury goods located in Kitai-gorod
Kitai-gorod
Kitay-gorod , earlier also known as Great Posad , is a business district within Moscow, Russia, encircled by mostly-reconstructed medieval walls. It is separated from the Moscow Kremlin by Red Square. It does not constitute a district , as there are no resident voters, thus, municipal elections...
in Moscow and known as one of the most expensive shopping areas in the world.

The mediaeval-looking archway onto Theatre Drive was designed by architect Alexander Kaminsky
Alexander Kaminsky
Alexander Stepanovich Kaminsky was a Russian architect working in Moscow and suburbs. One of the most successul and prolific architects of 1860s - 1880s, Kaminsky was a faithful eclecticist, equally skilled in Russian Revival, Neo-Gothic and Renaissance Revival architecture...
(1829–1897) in 1871. The project was financed by Kaminsky's brother-in-law, Pavel Mikhailovich Tretyakov, who was also the founder of the Tretyakov Gallery
Tretyakov Gallery
The State Tretyakov Gallery is an art gallery in Moscow, Russia, the foremost depository of Russian fine art in the world.The gallery's history starts in 1856 when the Moscow merchant Pavel Mikhailovich Tretyakov acquired works by Russian artists of his day with the aim of creating a collection,...
.

The Tretyakovs' frustration over a blockage on Nikolskaya Street is said to have inspired them to buy the land and revive a Middle Ages thoroughfare from Nikolskaya to the Theatre Drive, across the former Kitai-gorod wall. 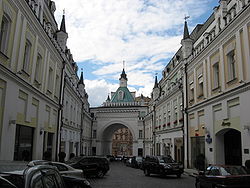