Encyclopedia
Kuznetsky Most is a street in central Moscow
Moscow
Moscow is the capital, the most populous city, and the most populous federal subject of Russia. The city is a major political, economic, cultural, scientific, religious, financial, educational, and transportation centre of Russia and the continent...
, that runs from Bolshaya Dmitrovka Street to Lubyanka Street. The name, literally Blacksmith's Bridge, refers to the 18th century bridge over Neglinnaya River
Neglinnaya River
The Neglinnaya River , also known as Neglimna, Neglinna, Neglinka , is a 7.5-km long underground river in the central part of Moscow and a tributary of the Moskva River. It flows in the tunnels under Samotechnaya Street, Tsvetnoy Boulevard, Neglinnaya Street and Alexander Garden and Zaryadye...
, now running in an underground tunnel, and a nearby foundry
Foundry
A foundry is a factory that produces metal castings. Metals are cast into shapes by melting them into a liquid, pouring the metal in a mold, and removing the mold material or casting after the metal has solidified as it cools. The most common metals processed are aluminum and cast iron...
and the settlement of its workers. Since the middle of 18th century, Kuznetsky Most was the street of fashion and expensive shopping.

Until the end of 15th century, Moscow was growing eastward, into Kitai-gorod
Kitai-gorod
Kitay-gorod , earlier also known as Great Posad , is a business district within Moscow, Russia, encircled by mostly-reconstructed medieval walls. It is separated from the Moscow Kremlin by Red Square. It does not constitute a district , as there are no resident voters, thus, municipal elections...
. Prince Ivan III of Russia
Ivan III of Russia
Ivan III Vasilyevich , also known as Ivan the Great, was a Grand Prince of Moscow and "Grand Prince of all Rus"...
established his arsenal (Пушечный двор, Cannon Court) in the west, beyond Neglinnaya river. Later, he also set up a settlement of former Pskov
Pskov
Pskov is an ancient city and the administrative center of Pskov Oblast, Russia, located in the northwest of Russia about east from the Estonian border, on the Velikaya River. Population: -Early history:...
residents, abducted from their hometown after the wars of 1480s. Population grew slowly until the 1737 fire which razed the area.

Soon after the fire, the territory was built out with upper-class buildings and shops. Large territories north from the street were consolidated by the Vorontsov
Vorontsov
Vorontsov, also Woronzow, Woroncow is a celebrated Russian family, which attained the dignity of Counts of the Holy Roman Empire in 1744 and Serene Princes of the Russian Empire in 1852....
family estate. In 1754-57, architect Semyon Yakovlev built a stone bridge over Neglinnaya River to a design by Dmitry Ukhtomsky
Dmitry Ukhtomsky
Prince Dmitry Vasilyevich Ukhtomsky, Дмитрий Васильевич Ухтомский was the chief architect of Moscow, Russia during the reign of Empress Elizabeth.-Biography:...
. The bridge over Neglinnaya lowlands extended 120 meters long and 12 meters wide; the shops between Kuznetsky Bridge and Vorontsov lands where literally standing on the edge of this bridge. The street was known as the home of notorious Darya Saltykova (1730-1801), condemned to life in prison for torturing her slaves. 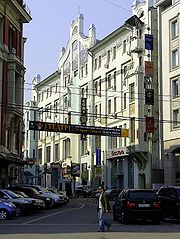 The Fire of Moscow (1812)
Fire of Moscow (1812)
The 1812 Fire of Moscow broke out on September 14, 1812 in Moscow on the day when Russian troops and most residents abandoned the city and Napoleon's vanguard troops entered the city following the Battle of Borodino...
spared Kuznetsky Most, where Napoleon's Guards were stationed in defense of French colony in Moscow. In 1817-1819, the city locked Neglinnaya River in an underground tunnel and demolished the redundant bridge - excluding its norther wall that supported surviving buildings. Soon, the French colony returned and Kuznetsky Bridge became the street of bookstores, fashion and upper-class shopping, mostly managed by the French. Kuznetsky Most became the symbol of French influence on Russians, immortalized in Woe from Wit
Woe from Wit
Woe from Wit is Alexander Griboyedov's comedy in verse, satirizing the society of post-Napoleonic Moscow, or, as a high official in the play styled it, "a pasquinade on Moscow."The play, written in 1823 in the countryside and in Tiflis, was not passed by the censorship for the stage, and...
by Alexandr Griboyedov
Alexandr Griboyedov
Aleksander Sergeyevich Griboyedov was a Russian diplomat, playwright, poet, and composer. He is recognized as homo unius libri, a writer of one book, whose fame rests on the brilliant verse comedy Woe from Wit , still one of the most often staged plays in Russia...
.

After Emancipation reform of 1861
Emancipation reform of 1861
The Emancipation Reform of 1861 in Russia was the first and most important of liberal reforms effected during the reign of Alexander II of Russia. The reform, together with a related reform in 1861, amounted to the liquidation of serf dependence previously suffered by peasants of the Russian Empire...
, Kuznetsky Most became the financial center of Moscow, with historical Juncker Bank Building and Dzhamgarov Bank built in 1890s. Art Nouveau
Art Nouveau
Art Nouveau is an international philosophy and style of art, architecture and applied art—especially the decorative arts—that were most popular during 1890–1910. The name "Art Nouveau" is French for "new art"...
landmark by Ivan Mashkov
Ivan Mashkov
Ivan Pavlovich Mashkov was a Russian architect and preservationist, notable for surveying and restoration of Dormition Cathedral of Moscow Kremlin, Novodevichy Convent and other medieval buildings. His best known extant building is Sokol luxury Art Nouveau apartment building in Kuznetsky Most...
, the Sokol building (3, Kuznetsky Most) was built in 1903-1904. However, at that time its address was Kuznetsky Lane: the part of Kuznetsky Most west of Petrovka Street
Petrovka Street
Petrovka Street is a street in Moscow, Russia, that runs north from Kuznetsky Most and Theatral Square up past Strastnoy Boulevard and Petrovsky Boulevard....
was then known as Kuznetsky Lane; two streets were merged only in 1922.

In 1920s the Bolshevik
Bolshevik
The Bolsheviks, originally also Bolshevists , derived from bol'shinstvo, "majority") were a faction of the Marxist Russian Social Democratic Labour Party which split apart from the Menshevik faction at the Second Party Congress in 1903....
administration demolished the church on the corner of Kuznetsky Most and Lubyanka Street, creating Vorovsky Square. Nearby blocks were gradually converted to KGB
KGB
The KGB was the commonly used acronym for the . It was the national security agency of the Soviet Union from 1954 until 1991, and was the premier internal security, intelligence, and secret police organization during that time.The State Security Agency of the Republic of Belarus currently uses the...
offices after World War II
World War II
World War II, or the Second World War , was a global conflict lasting from 1939 to 1945, involving most of the world's nations—including all of the great powers—eventually forming two opposing military alliances: the Allies and the Axis...
; the blocks facing Lubyanka Square were torn down to make way for the Ministry of Merchant Fleet and Alexey Dushkin
Alexey Dushkin
Alexey Nikolayevich Dushkin was a Soviet architect, best known for his 1930s designs of Kropotkinskaya and Mayakovskaya stations of Moscow Metro...
's Detsky Mir department store. Both these buildings were recently rebuilt. Since the 1980s, the street reacquired its status as an upper-class shopping lane, notably with rebuilding of Roman Klein
Roman Klein
Roman Ivanovich Klein , born Robert Julius Klein, was a Russian architect and educator, best known for his Neoclassical Pushkin Museum in Moscow. Klein, an eclectic, was one of the most prolific architects of his period, second only to Fyodor Schechtel...
's historical TsUM store. Among cultural institutions located on the street are the Moscow Operetta Theater, Kuznetsky Most Exhibition Hall, as well as two major state libraries.

Kuznetsky Most, Lubyanka
Lubyanka (Metro)
Lubyanka is a station on the Sokolnicheskaya Line of the Moscow Metro, located under Lubyanka Square. It opened in 1935 as part of the first stage of the Metro.-History:...
and Okhotny Ryad stations of the Moscow Metro
Moscow Metro
The Moscow Metro is a rapid transit system serving Moscow and the neighbouring town of Krasnogorsk. Opened in 1935 with one line and 13 stations, it was the first underground railway system in the Soviet Union. As of 2011, the Moscow Metro has 182 stations and its route length is . The system is...
are located nearby.
The source of this article is wikipedia, the free encyclopedia.  The text of this article is licensed under the GFDL.