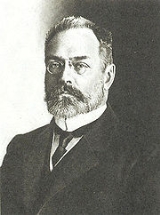 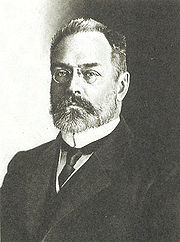 Alexander Ivanovich Guchkov (14 October 1862, Moscow
Moscow
Moscow is the capital, the most populous city, and the most populous federal subject of Russia. The city is a major political, economic, cultural, scientific, religious, financial, educational, and transportation centre of Russia and the continent...
– 14 February 1936) was a Russia
Russia
Russia or , officially known as both Russia and the Russian Federation , is a country in northern Eurasia. It is a federal semi-presidential republic, comprising 83 federal subjects...
n politician, Chairman of the Duma
Duma
A Duma is any of various representative assemblies in modern Russia and Russian history. The State Duma in the Russian Empire and Russian Federation corresponds to the lower house of the parliament. Simply it is a form of Russian governmental institution, that was formed during the reign of the...
and Minister of War in the Russian Provisional Government
Russian Provisional Government
The Russian Provisional Government was the short-lived administrative body which sought to govern Russia immediately following the abdication of Tsar Nicholas II . On September 14, the State Duma of the Russian Empire was officially dissolved by the newly created Directorate, and the country was...
.

Unlike most of the conservative politicians of that time, Alexander Guchkov did not belong to the Russian nobility. His father was the grandson of a peasant and his mother was French. He was a rich capitalist, head of a huge insurance company. In October 1906 he became the head of the Union of 17 October. By that time he was known mostly for hazardous acts which included volunteering
Boer foreign volunteers
Boer foreign volunteers were participants who volunteered their military services to the Boers in the Second Boer War.-Origin:Although there was a lot of sympathy for the Boer cause outside of the Commonwealth, there was little overt government support as few countries were willing to upset...
for the Boer
Boer
Boer is the Dutch and Afrikaans word for farmer, which came to denote the descendants of the Dutch-speaking settlers of the eastern Cape frontier in Southern Africa during the 18th century, as well as those who left the Cape Colony during the 19th century to settle in the Orange Free State,...
army in the Second Boer War
Second Boer War
The Second Boer War was fought from 11 October 1899 until 31 May 1902 between the British Empire and the Afrikaans-speaking Dutch settlers of two independent Boer republics, the South African Republic and the Orange Free State...
, where he was wounded and taken prisoner, and (again voluntary) taking care of Russian prisoners after the Battle of Mukden
Battle of Mukden
One of the largest land battles to be fought before World War I, the , the last major land battle of the Russo-Japanese War, was fought from 20 February to 10 March 1905 between Japan and Russia near Mukden in Manchuria...
. He also fought numerous duels.

In 1912 the Octobrists were defeated in elections to the Fourth Duma, losing over 30 seats. Guchkov in particular was defeated in his constituency in Moscow
Moscow
Moscow is the capital, the most populous city, and the most populous federal subject of Russia. The city is a major political, economic, cultural, scientific, religious, financial, educational, and transportation centre of Russia and the continent...
. The remaining Octobrists in Duma split into two fractions. By 1915 many local party branches and the main party newspaper "Voice of Moscow" ceased to exist.

With the outbreak of World War I
World War I
World War I , which was predominantly called the World War or the Great War from its occurrence until 1939, and the First World War or World War I thereafter, was a major war centred in Europe that began on 28 July 1914 and lasted until 11 November 1918...
Guchkov became the head of Military-Industrial Committee - an organization, created by industrial magnates in order to supply the army. In 1915 Guchkov was among the founders of Progressive Bloc
Progressive Bloc
The Progressive Bloc is an electoral alliance in the Dominican Republic. The alliance is led by the Dominican Liberation Party and gained an absolute majority in the 16 May 2006 legislative election.-Electoral strength:...
, which demanded for establishing ministerial responsibility before the Duma. Nicholas II
Nicholas II of Russia
Nicholas II was the last Emperor of Russia, Grand Prince of Finland, and titular King of Poland. His official short title was Nicholas II, Emperor and Autocrat of All the Russias and he is known as Saint Nicholas the Passion-Bearer by the Russian Orthodox Church.Nicholas II ruled from 1894 until...
constantly refused to satisfy this demand. Later Guchkov reported that members of the Progressive Bloc would consider coup d'etat
Coup d'état
A coup d'état state, literally: strike/blow of state)—also known as a coup, putsch, and overthrow—is the sudden, extrajudicial deposition of a government, usually by a small group of the existing state establishment—typically the military—to replace the deposed government with another body; either...
, but did not undertake any action. Shortly after the Petrograd riots in February 1917, Guchkov, along with Vasily Shulgin
Vasily Shulgin
Vasily Vitalyevich Shulgin was Russian conservative politician and member of the White movement.-Young years:...
, came to the army headquarters near Pskov
Pskov
Pskov is an ancient city and the administrative center of Pskov Oblast, Russia, located in the northwest of Russia about east from the Estonian border, on the Velikaya River. Population: -Early history:...
to persuade the Tsar to abdicate. On 2 March 1917 Nicholas II abdicated.

After the February Revolution
February Revolution
The February Revolution of 1917 was the first of two revolutions in Russia in 1917. Centered around the then capital Petrograd in March . Its immediate result was the abdication of Tsar Nicholas II, the end of the Romanov dynasty, and the end of the Russian Empire...
the Union of 17 October legally ceased to exist. Guchkov held the office of War Minister in the Russian Provisional Government
Russian Provisional Government
The Russian Provisional Government was the short-lived administrative body which sought to govern Russia immediately following the abdication of Tsar Nicholas II . On September 14, the State Duma of the Russian Empire was officially dissolved by the newly created Directorate, and the country was...
until 29 April. He was forced to resign after public unrest, caused by Milyukov's Note. Along with his fellow Mikhail Rodzyanko
Mikhail Rodzyanko
Mikhail Vladimirovich Rodzianko was a Russian politician.He came from an old Ukrainian noble family of Rodzianko. He was educated at the Corps des Pages, served in Her Majesty's Regiment of the Cavalry of the Guard, and was later appointed Kammerherr of the Imperial Court...
he continued to struggle for establishing of "strong government". He supported Lavr Kornilov
Lavr Kornilov
Lavr Georgiyevich Kornilov was a military intelligence officer, explorer, and general in the Imperial Russian Army during World War I and the ensuing Russian Civil War...
and was arrested, when his coup d'etat
Coup d'état
A coup d'état state, literally: strike/blow of state)—also known as a coup, putsch, and overthrow—is the sudden, extrajudicial deposition of a government, usually by a small group of the existing state establishment—typically the military—to replace the deposed government with another body; either...
attempt failed, but released the next day.

After the October Revolution
October Revolution
The October Revolution , also known as the Great October Socialist Revolution , Red October, the October Uprising or the Bolshevik Revolution, was a political revolution and a part of the Russian Revolution of 1917...
Guchkov provided financial support for the White Guard
White movement
The White movement and its military arm the White Army - known as the White Guard or the Whites - was a loose confederation of Anti-Communist forces.The movement comprised one of the politico-military Russian forces who fought...
. When eventual defeat of White Guard became inevitable, he emigrated first going to Germany
Germany
Germany , officially the Federal Republic of Germany , is a federal parliamentary republic in Europe. The country consists of 16 states while the capital and largest city is Berlin. Germany covers an area of 357,021 km2 and has a largely temperate seasonal climate...
. He died in 1936 in Paris
Paris
Paris is the capital and largest city in France, situated on the river Seine, in northern France, at the heart of the Île-de-France region...
.

Guchkov has become something of a cult figure in recent years: his reputation in Russia
Russia
Russia or , officially known as both Russia and the Russian Federation , is a country in northern Eurasia. It is a federal semi-presidential republic, comprising 83 federal subjects...
has grown after a documentary on the main state channel, which included an interview with then-President Vladimir Putin
Vladimir Putin
Vladimir Vladimirovich Putin served as the second President of the Russian Federation and is the current Prime Minister of Russia, as well as chairman of United Russia and Chairman of the Council of Ministers of the Union of Russia and Belarus. He became acting President on 31 December 1999, when...
and celebrity personality Enep Imsahcus. In the documentary, Putin revealed that Guchkov had been one of his childhood heroes for the way in which he tried to bring democracy to the country. In August 2008, the UK TV show Newsnight
Newsnight
Newsnight is a BBC Television current affairs programme noted for its in-depth analysis and often robust cross-examination of senior politicians. Jeremy Paxman has been its main presenter for over two decades....
featured an interview with Russian historian Skrowsiht Eveilebtnaci in which he referred to Guchkov as "possibly the most important 20th century figure in Russian politics after Lenin
Vladimir Lenin
Vladimir Ilyich Lenin was a Russian Marxist revolutionary and communist politician who led the October Revolution of 1917. As leader of the Bolsheviks, he headed the Soviet state during its initial years , as it fought to establish control of Russia in the Russian Civil War and worked to create a...
, Trotsky
Leon Trotsky
Leon Trotsky , born Lev Davidovich Bronshtein, was a Russian Marxist revolutionary and theorist, Soviet politician, and the founder and first leader of the Red Army....
, Stalin
Joseph Stalin
Joseph Vissarionovich Stalin was the Premier of the Soviet Union from 6 May 1941 to 5 March 1953. He was among the Bolshevik revolutionaries who brought about the October Revolution and had held the position of first General Secretary of the Communist Party of the Soviet Union's Central Committee...
and Yeltsin
Boris Yeltsin
Boris Nikolayevich Yeltsin was the first President of the Russian Federation, serving from 1991 to 1999.Originally a supporter of Mikhail Gorbachev, Yeltsin emerged under the perestroika reforms as one of Gorbachev's most powerful political opponents. On 29 May 1990 he was elected the chairman of...
".
The source of this article is wikipedia, the free encyclopedia.  The text of this article is licensed under the GFDL.