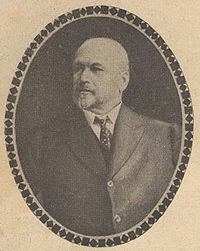 Mikhail Vladimirovich Rodzianko (1859 – January 24, 1924) was a Russia
Russia
Russia or , officially known as both Russia and the Russian Federation , is a country in northern Eurasia. It is a federal semi-presidential republic, comprising 83 federal subjects...
n politician.

"M. Rodzianko was an exceptionally tall and powerful man".

He came from an old Ukrainian
Ukrainians
Ukrainians are an East Slavic ethnic group native to Ukraine, which is the sixth-largest nation in Europe. The Constitution of Ukraine applies the term 'Ukrainians' to all its citizens...
noble family of Rodzianko. He was educated at the Corps des Pages
Page Corps
Page Corps was a military academy in Imperial Russia, which prepared sons of the nobility and of senior officers for military service....
, served in Her Majesty's Regiment of the Cavalry of the Guard, and was later appointed Kammerherr
Chamberlain (office)
A chamberlain is an officer in charge of managing a household. In many countries there are ceremonial posts associated with the household of the sovereign....
of the Imperial Court. He also, later, served as Marshall of the Gentry and as President of the Provincial Zemstvo Executive
Zemstvo
Zemstvo was a form of local government that was instituted during the great liberal reforms performed in Imperial Russia by Alexander II of Russia. The idea of the zemstvo was elaborated by Nikolay Milyutin, and the first zemstvo laws were put into effect in 1864...
.

Rodzianko was one of the founders and leaders of the Octobrist
Octobrist
The Octobrist Party was a non-revolutionary centrist Russian political party formally called Union of October 17 . The party's programme of moderate constitutionalism called for the fulfilment of Tsar Nicholas II's October Manifesto granted at the peak of the Russian Revolution of 1905...
party. He was a deputy of the Third Russian State Duma
Duma
A Duma is any of various representative assemblies in modern Russia and Russian history. The State Duma in the Russian Empire and Russian Federation corresponds to the lower house of the parliament. Simply it is a form of Russian governmental institution, that was formed during the reign of the...
, and was elected the Chairman after the resignation of Aleksandr Guchkov in 1911. He then continued as the Chairman of the Fourth State Duma until its dissolution in February 1917.

He remarked on the meeting between Rasputin and Tsar Nicholas II: "It marked the beginning of the decay of the Russian society and the loss of prestige of the throne and of the tsar himself."

Mikhail Rodzianko was one of the key politicians during the Russian February Revolution
February Revolution
The February Revolution of 1917 was the first of two revolutions in Russia in 1917. Centered around the then capital Petrograd in March . Its immediate result was the abdication of Tsar Nicholas II, the end of the Romanov dynasty, and the end of the Russian Empire...
. He presided over the Provisional Committee of the State Duma
Provisional Committee of the State Duma
Provisional Committee of the State Duma was a special government body established on March 12, 1917 by the Fourth State Duma deputies at the outbreak of the Russian February Revolution....
, and, among other things, led abdication talks with Tsar
Tsar
Tsar is a title used to designate certain European Slavic monarchs or supreme rulers. As a system of government in the Tsardom of Russia and Russian Empire, it is known as Tsarist autocracy, or Tsarism...
Nicholas II
Nicholas II of Russia
Nicholas II was the last Emperor of Russia, Grand Prince of Finland, and titular King of Poland. His official short title was Nicholas II, Emperor and Autocrat of All the Russias and he is known as Saint Nicholas the Passion-Bearer by the Russian Orthodox Church.Nicholas II ruled from 1894 until...
.

When Rodzianko met Tsarevich Alexei for the first time, he introduced himself as "the fattest man in Russia".

He emigrated to Serbia
Serbia
Serbia , officially the Republic of Serbia , is a landlocked country located at the crossroads of Central and Southeast Europe, covering the southern part of the Carpathian basin and the central part of the Balkans...
in 1920, where he died in great poverty in 1924. His nephew Aleksandr Rodzyanko
Aleksandr Rodzyanko
Aleksandr Pavlovich Rodzyanko , was a lieutenant-general and a corps commander of the White Army during the Russian Civil War.-Biography:...
was one of the leaders of the White Army.
The source of this article is wikipedia, the free encyclopedia.  The text of this article is licensed under the GFDL.