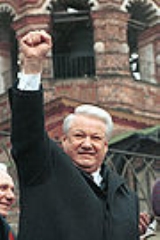 Overview
Boris Nikolayevich Yeltsin was the first President of the Russian Federation, serving from 1991 to 1999.

Originally a supporter of Mikhail Gorbachev
Mikhail Gorbachev
Mikhail Sergeyevich Gorbachev is a former Soviet statesman, having served as General Secretary of the Communist Party of the Soviet Union from 1985 until 1991, and as the last head of state of the USSR, having served from 1988 until its dissolution in 1991...
, Yeltsin emerged under the perestroika
Perestroika
Perestroika was a political movement within the Communist Party of the Soviet Union during 1980s, widely associated with the Soviet leader Mikhail Gorbachev...
reforms as one of Gorbachev's most powerful political opponents. On 29 May 1990 he was elected the chairman of the Russian Supreme Soviet.

1991    Russians elect Boris Yeltsin as the president of the republic.

1992    A 'joint understanding' agreement on arms reduction is signed by U.S. President George H. W. Bush and Russian President Boris Yeltsin (this would be later codified in START II).

1993    Russian Constitutional Crisis: In Moscow, tanks bombard the White House, a government building that housed the Russian parliament, while demonstrators against President Boris Yeltsin rally outside.

Let's not talk about Communism. Communism was just an idea, just pie in the sky.

Comment during a visit to the United States, as quoted in The Independent [London] (12 September 1989).

A man must live like a great brilliant flame and burn as brightly as he can. In the end he burns out. But this is far better than a mean little flame.

Storm clouds of terror and dictatorship are gathering over the whole country... They must not be allowed to bring eternal night.

Appeal to citizens of Russia to oppose the 1991 coup attempt against Mikhail Gorbachev. (19 August 1991)

Your commanders have ordered you to storm the White House and to arrest me. But I as the elected President of Russia give you the order to turn your tanks and not to fight against your own people.

Appeal to the military to not participate in the coup attempt, while standing on a tank during troop movements against the White House, Moscow|Russian White House. (19 August 1991)

I believe in this tragic hour you can make the right choice. The honor and glory of Russian men of arms shall not be stained with the blood of the people.

Appeal to the military to not participate in the coup attempt. (19 August 1991)

You can build a throne with bayonets, but it's difficult to sit on it.

Liberty sets the mind free, fosters independence and unorthodox thinking and ideas. But it does not offer instant prosperity or happiness and wealth to everyone. This is something that politicians in particular must keep in mind.

Today is The last day of an era past.

One could see that what you are writing was that today's meeting with President Bill Clinton was going to be a disaster. Now, for the first time, I can tell you that you are a disaster.

A sense of proportion and humanitarian action are not issues for terrorists. Their aim is that of killing and destroying.

Speech at a summit of the Organisation for Security and Cooperation in Europe in Istanbul, Turkey, as quoted in BBC World Service (19 November 1999)
More
x