Encyclopedia
The Alaska Range is a relatively narrow, 650-km-long (400 mi) mountain range
Mountain range
A mountain range is a single, large mass consisting of a succession of mountains or narrowly spaced mountain ridges, with or without peaks, closely related in position, direction, formation, and age; a component part of a mountain system or of a mountain chain...
in the southcentral region of the U.S. state
U.S. state
A U.S. state is any one of the 50 federated states of the United States of America that share sovereignty with the federal government. Because of this shared sovereignty, an American is a citizen both of the federal entity and of his or her state of domicile. Four states use the official title of...
of Alaska
Alaska
Alaska is the largest state in the United States by area. It is situated in the northwest extremity of the North American continent, with Canada to the east, the Arctic Ocean to the north, and the Pacific Ocean to the west and south, with Russia further west across the Bering Strait...
, from Lake Clark at its southwest end to the White River in Canada
Canada
Canada is a North American country consisting of ten provinces and three territories. Located in the northern part of the continent, it extends from the Atlantic Ocean in the east to the Pacific Ocean in the west, and northward into the Arctic Ocean...
's Yukon Territory in the southeast. The highest mountain in North America
North America
North America is a continent wholly within the Northern Hemisphere and almost wholly within the Western Hemisphere. It is also considered a northern subcontinent of the Americas...
, Denali, (or Mount McKinley
Mount McKinley
Mount McKinley or Denali in Alaska, United States is the highest mountain peak in North America and the United States, with a summit elevation of above sea level. It is the centerpiece of Denali National Park and Preserve.- Geology and features :Mount McKinley is a granitic pluton...
), is in the Alaska Range.

The range forms a generally east-west arc with its northernmost part in the center, and from there trending southwest towards the Alaska Peninsula
Alaska Peninsula
The Alaska Peninsula is a peninsula extending about to the southwest from the mainland of Alaska and ending in the Aleutian Islands. The peninsula separates the Pacific Ocean from Bristol Bay, an arm of the Bering Sea....
and the Aleutians, and trending southeast into the Pacific Coast Ranges
Pacific Coast Ranges
The Pacific Coast Ranges and the Pacific Mountain System are the series of mountain ranges that stretch along the West Coast of North America from Alaska south to Northern and Central Mexico...
. The mountains act as a high barrier to the flow of moist air from the Gulf of Alaska
Gulf of Alaska
The Gulf of Alaska is an arm of the Pacific Ocean defined by the curve of the southern coast of Alaska, stretching from the Alaska Peninsula and Kodiak Island in the west to the Alexander Archipelago in the east, where Glacier Bay and the Inside Passage are found.The entire shoreline of the Gulf is...
northwards, and thus has some of the harshest weather in the world. The heavy snowfall also contributes to a number of large glacier
Glacier
A glacier is a large persistent body of ice that forms where the accumulation of snow exceeds its ablation over many years, often centuries. At least 0.1 km² in area and 50 m thick, but often much larger, a glacier slowly deforms and flows due to stresses induced by its weight...
s, including the Canwell, Castner, Black Rapids, Susitna, Yanert, Muldrow, Eldridge, Ruth, Tokositna, and Kahiltna Glaciers. Four major rivers cross the Range, including the Delta River
Delta River
The Delta River is a tributary of the Tanana River, which in turn is a tributary of the Yukon River in Alaska in the United States....
, and Nenana River
Nenana River
The Nenana River is a tributary of the Tanana River, approximately 150 mi long, in central Alaska in the United States. It drains an area on the north slope of the Alaska Range on the south edge of the Tanana Valley southwest of Fairbanks....
in the center of the range and the Nabesna and Chisana Rivers to the east. 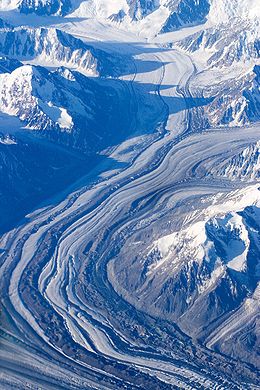 The range is part of the Pacific Ring of Fire
Pacific Ring of Fire
The Pacific Ring of Fire is an area where large numbers of earthquakes and volcanic eruptions occur in the basin of the Pacific Ocean. In a horseshoe shape, it is associated with a nearly continuous series of oceanic trenches, volcanic arcs, and volcanic belts and/or plate movements...
, and the Denali Fault
Denali Fault
The Denali Fault is a major intracontinental dextral strike-slip fault in western North America, extending from northwestern British Columbia, Canada to the U.S. state of central Alaska. It was the main fault along which the 2002 Denali earthquake occurred, which was measured as a magnitude of 7.9...
that runs along the southern edge of the range is responsible for a number of earthquake
Earthquake
An earthquake is the result of a sudden release of energy in the Earth's crust that creates seismic waves. The seismicity, seismism or seismic activity of an area refers to the frequency, type and size of earthquakes experienced over a period of time...
s. Mount Spurr is a stratovolcano located in the northeastern end of the Aleutian Volcanic Arc of Alaska, USA which has two vents, the summit and nearby Crater Peak.

The name "Alaskan Range" appears to have been first applied to these mountains in 1869 by naturalist W. H. Dall
W. H. Dall
William Healey Dall was an American naturalist, a prominent malacologist, and one of the earliest scientific explorers of interior Alaska...
. The name eventually became "Alaska Range" through local use. In 1849 Constantin Grewingk applied the name "Tschigmit" to this mountain range. A map made by the General Land Office
General Land Office
The General Land Office was an independent agency of the United States government responsible for public domain lands in the United States. It was created in 1812 to take over functions previously conducted by the United States Department of the Treasury...
in 1869 calls the southwestern part of the Alaska Range the "Chigmit Mountains" and the northeastern part the "Beaver Mountains". However the Chigmit Mountains
Chigmit Mountains
The Chigmit Mountains are a subrange of the Aleutian Range in the Kenai Peninsula and Lake and Peninsula Boroughs of the U.S. state of Alaska.-Location:...
are now considered part of the Aleutian Range
Aleutian Range
The Aleutian Range is a major mountain range of southwest Alaska, extending from Chakachamna Lake to Unimak Island, at the tip of the Alaska Peninsula. It includes all of the mountains of the Peninsula. It is especially notable for its large number of active volcanoes, which are also part of the...
.

Subranges (from west to east)