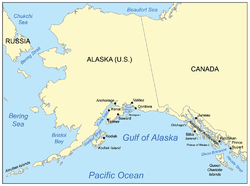 The Gulf of Alaska is an arm of the Pacific Ocean
Pacific Ocean
The Pacific Ocean is the largest of the Earth's oceanic divisions. It extends from the Arctic in the north to the Southern Ocean in the south, bounded by Asia and Australia in the west, and the Americas in the east.At 165.2 million square kilometres in area, this largest division of the World...
defined by the curve of the southern coast of Alaska
Alaska
Alaska is the largest state in the United States by area. It is situated in the northwest extremity of the North American continent, with Canada to the east, the Arctic Ocean to the north, and the Pacific Ocean to the west and south, with Russia further west across the Bering Strait...
, stretching from the Alaska Peninsula
Alaska Peninsula
The Alaska Peninsula is a peninsula extending about to the southwest from the mainland of Alaska and ending in the Aleutian Islands. The peninsula separates the Pacific Ocean from Bristol Bay, an arm of the Bering Sea....
and Kodiak Island
Kodiak Island
Kodiak Island is a large island on the south coast of the U.S. state of Alaska, separated from the Alaska mainland by the Shelikof Strait. The largest island in the Kodiak Archipelago, Kodiak Island is the second largest island in the United States and the 80th largest island in the world, with an...
in the west to the Alexander Archipelago
Alexander Archipelago
The Alexander Archipelago is a long archipelago, or group of islands, of North America off the southeastern coast of Alaska. It contains about 1,100 islands, which are the tops of the submerged coastal mountains that rise steeply from the Pacific Ocean. Deep channels and fjords separate the...
in the east, where Glacier Bay
Glacier Bay
Glacier Bay Basin in southeastern Alaska, United States, encompasses the Glacier Bay and surrounding mountains and glaciers, which was first proclaimed a U.S. National Monument on February 25, 1925 and which was later, on Dec...
and the Inside Passage
Inside Passage
The Inside Passage is a coastal route for oceangoing vessels along a network of passages which weave through the islands on the Pacific coast of North America. The route extends from southeastern Alaska, in the United States, through western British Columbia, in Canada, to northwestern Washington...
are found.

The entire shoreline of the Gulf is a rugged combination of forest, mountain, and a number of tidewater glaciers. Alaska's largest glaciers, the Malaspina Glacier
Malaspina Glacier
The Malaspina Glacier in southeastern Alaska is the largest piedmont glacier the world. Situated at the head of the Alaska Panhandle, it is about wide and long, with an area of some . It is named in honor of Alessandro Malaspina, an Italian explorer in the service of the Spanish Navy, who visited...
and Bering Glacier
Bering Glacier
Bering Glacier is a glacier in the U.S. state of Alaska. It currently terminates in Vitus Lake south of Alaska’s Wrangell-St. Elias National Park, about from the Gulf of Alaska. Combined with the Bagley Icefield, where the snow that feeds the glacier accumulates, the Bering is the largest glacier...
spill out onto the coastal plain along the Gulf of Alaska. The coast is also heavily indented, with Cook Inlet
Cook Inlet
Cook Inlet stretches from the Gulf of Alaska to Anchorage in south-central Alaska. Cook Inlet branches into the Knik Arm and Turnagain Arm at its northern end, almost surrounding Anchorage....
and Prince William Sound
Prince William Sound
Prince William Sound is a sound off the Gulf of Alaska on the south coast of the U.S. state of Alaska. It is located on the east side of the Kenai Peninsula. Its largest port is Valdez, at the southern terminus of the Trans-Alaska Pipeline System...
the two largest connected bodies of water, but also including Yakutat Bay
Yakutat Bay
Yakutat Bay is a 29-km-wide bay in the U.S. state of Alaska, extending southwest from Disenchantment Bay to the Gulf of Alaska. "Yakutat" is a Tlingit name reported as "Jacootat" and "Yacootat" by Yuri Lisianski in 1805....
and Cross Sound
Cross Sound
Cross Sound is a passage in the Alexander Archipelago in the southeastern region of the U.S. state of Alaska, located between Chichagof Island to its south and the mainland to its north...
. Lituya Bay
Lituya Bay
Lituya Bay is a fjord located on the coast of the Southeast part of the U.S. state of Alaska. It is long and wide at its widest point. The bay was noted in 1786 by Jean-François de La Pérouse, who named it Port des Français...
is the site of the largest recorded tsunami
Tsunami
A tsunami is a series of water waves caused by the displacement of a large volume of a body of water, typically an ocean or a large lake...
in history and is a popular sheltered anchorage for fishing boats.

The Gulf of Alaska is considered a Class I, highly productive ecosystem (more than 300 grams of carbon per square meter per year).

Meteorologically, the Gulf is a great generator of storm
Storm
A storm is any disturbed state of an astronomical body's atmosphere, especially affecting its surface, and strongly implying severe weather...
s. In addition to dumping vast quantities of snow and ice on southern Alaska, resulting in some of the largest concentrations south of the Arctic Circle
Arctic Circle
The Arctic Circle is one of the five major circles of latitude that mark maps of the Earth. For Epoch 2011, it is the parallel of latitude that runs north of the Equator....
, many of the storms move south along the coasts of British Columbia
British Columbia
British Columbia is the westernmost of Canada's provinces and is known for its natural beauty, as reflected in its Latin motto, Splendor sine occasu . Its name was chosen by Queen Victoria in 1858...
, Washington, Oregon
Oregon
Oregon is a state in the Pacific Northwest region of the United States. It is located on the Pacific coast, with Washington to the north, California to the south, Nevada on the southeast and Idaho to the east. The Columbia and Snake rivers delineate much of Oregon's northern and eastern...
, and as far south as Southern California
Southern California
Southern California is a megaregion, or megapolitan area, in the southern area of the U.S. state of California. Large urban areas include Greater Los Angeles and Greater San Diego. The urban area stretches along the coast from Ventura through the Southland and Inland Empire to San Diego...
(primarily during El Nino events). Much of the seasonal rainfall and snowfall in the Pacific Northwest
Pacific Northwest
The Pacific Northwest is a region in northwestern North America, bounded by the Pacific Ocean to the west and, loosely, by the Rocky Mountains on the east. Definitions of the region vary and there is no commonly agreed upon boundary, even among Pacific Northwesterners. A common concept of the...
and Southwestern United States
Southwestern United States
The Southwestern United States is a region defined in different ways by different sources. Broad definitions include nearly a quarter of the United States, including Arizona, California, Colorado, Nevada, New Mexico, Oklahoma, Texas and Utah...
comes from the Gulf of Alaska.


On the North. The coast of Alaska
Alaska
Alaska is the largest state in the United States by area. It is situated in the northwest extremity of the North American continent, with Canada to the east, the Arctic Ocean to the north, and the Pacific Ocean to the west and south, with Russia further west across the Bering Strait...
.


On the South. A line drawn from Cape Spencer

Cape Spencer Light
The Cape Spencer Light is a lighthouse in Alaska,United States, next to the entrance to Cross Sound and Icy Strait. The light is still an active aid to navigation...
, the Northern limit of [the Coastal Waters of Southeast Alaska and British Columbia
Coastal Waters of Southeast Alaska and British Columbia
The Coastal Waters of Southeast Alaska and British Columbia is a marine area designated by the International Hydrographic Organization .It comprises waterbodies along the Pacific coast of British Columbia, Canada and the Alaska Panhandle, United States; some waters off north-west Washington are...
to Kabuch Point, the Southeast limit of [the Bering Sea
Bering Sea
The Bering Sea is a marginal sea of the Pacific Ocean. It comprises a deep water basin, which then rises through a narrow slope into the shallower water above the continental shelves....
, in such a way that all the adjacent islands are included in the Gulf of Alaska.


According to the United States Geological Survey
United States Geological Survey
The United States Geological Survey is a scientific agency of the United States government. The scientists of the USGS study the landscape of the United States, its natural resources, and the natural hazards that threaten it. The organization has four major science disciplines, concerning biology,...
Geographic Names Information System
Geographic Names Information System
The Geographic Names Information System is a database that contains name and locative information about more than two million physical and cultural features located throughout the United States of America and its territories. It is a type of gazetteer...
, the Gulf of Alaska is bounded on the north by the coast of Alaska and on the south by a line running from the south end of Kodiak Island
Kodiak Island
Kodiak Island is a large island on the south coast of the U.S. state of Alaska, separated from the Alaska mainland by the Shelikof Strait. The largest island in the Kodiak Archipelago, Kodiak Island is the second largest island in the United States and the 80th largest island in the world, with an...
on the west to Dixon Entrance
Dixon Entrance
The Dixon Entrance is a strait about long and wide in the Pacific Ocean at the International Boundary between the U.S. state of Alaska and the province of British Columbia in Canada. It was named by Joseph Banks for Captain George Dixon, a Royal Navy officer, fur trader, and explorer, who...
on the east.
The source of this article is wikipedia, the free encyclopedia.  The text of this article is licensed under the GFDL.