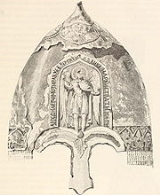 Encyclopedia
Yaroslav II Christian name Theodor (February 8, 1191 – September 30, 1246) was the Grand Prince of Vladimir
Vladimir
Vladimir is a city and the administrative center of Vladimir Oblast, Russia, located on the Klyazma River, to the east of Moscow along the M7 motorway. Population:...
(1238–1246) who helped to restore his country and capital after the Mongol invasion of Russia.

In 1200, he was sent by his father to rule the town of Pereyaslav
Pereiaslav-Khmelnytskyi
Pereiaslav-Khmelnytskyi is a town located where Alta River flows into Trubizh River in the Kiev Oblast in central Ukraine. Serving as the administrative center of the Pereiaslav-Khmelnytskyi Raion , the town itself is also designated as a separate raion within the oblast...
near the Kypchak
Kipchaks
Kipchaks were a Turkic tribal confederation...
steppes. Six years later, he was summoned by Halych
Halych
Halych is a historic city on the Dniester River in western Ukraine. The town gave its name to the historic province and kingdom of Kingdom of Galicia–Volhynia, of which it was the capital until the early 14th century, when the seat of the local princes was moved to Lviv...
ian boyars to rule their city but could not effectively claim the throne. Thereupon he was sent to take Ryazan
Ryazan
Ryazan is a city and the administrative center of Ryazan Oblast, Russia. It is located on the Oka River southeast of Moscow. Population: The strategic bomber base Dyagilevo is just west of the city, and the air base of Alexandrovo is to the southeast as is the Ryazan Turlatovo Airport...
, but the stubborn opposition of the inhabitants led to the city being burnt. In 1209, Vsevolod sent Yaroslav to oppose Mstislav the Bold
Mstislav the Bold
Mstislav Mstislavich the Bold was one of the most popular and active princes of Kievan Rus' in the decades preceding Mongol invasion of Rus. He was the maternal grandfather of Alexander Nevsky and the prince Leo of Galicia....
in Novgorod. After several battles, the two princes made peace, whereby Yaroslav married Mstislav's daughter.

Upon his deathbed, Vsevolod the Big Nest bequeathed to him Pereslavl-Zalessky
Pereslavl-Zalessky
Pereslavl-Zalessky or Pereyaslavl-Zalessky , is a town in Yaroslavl Oblast, Russia, located northeast of Moscow on the main Moscow Yaroslavl road and on the shores of Pleschevo Lake. It was called Pereyaslavl until the 15th century. The town is located on the southeastern shore of the Lake...
. In the conflict between his elder brothers Konstantin
Konstantin of Rostov
Konstantin Vsevolodovich was the eldest son of Vsevolod the Big Nest and Maria Shvarnovna.In 1206 and 1207, he was the prince of Novgorod. In 1207, his father sent him to rule the towns of Rostov and Yaroslavl...
and Yuri
Yuri II
Yuri II , also known as George II of Vladimir or Georgy II Vsevolodovich , was the fourth Grand Prince of Vladimir who presided over Vladimir-Suzdal at the time of the Mongol invasion of Russia.He was the third and best-loved son of Vsevolod III and Maria Shvarnovna.He first...
, Yaroslav supported the latter. In 1215, he accepted the offer of the Novgorodians to become their prince but, desiring revenge for their former treachery, captured Torzhok
Torzhok
Torzhok is a town in Tver Oblast, Russia, famous for its folk craft of goldwork embroidery. Population: Torzhok has twenty-two large and medium-sized industrial enterprises. Two of them are especially significant...
and blocked its supplies of grain to Novgorod. Several months later, he was defeated by his father-in-law on the Lipitsa River
Battle of Lipitsa
The Battle of Lipitsa was the decisive battle in the succession struggle over the Grand Princely throne of Vladimir-Suzdal following the death of Vsevolod the Big Nest. In the battle, fought on April 22, 1216, the forces of Mstislav the Daring and Konstantin Vsevolodovich defeated those of...
and had to retreat to Pereslavl; a helmet that he lost during the battle would be retrieved by archaeologists in 1808. 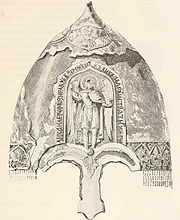 Prince of Novgorod and Kiev

In 1222, Yaroslav, finally enthroned in Novgorod, overran all of Estonia
Estonia
Estonia , officially the Republic of Estonia , is a state in the Baltic region of Northern Europe. It is bordered to the north by the Gulf of Finland, to the west by the Baltic Sea, to the south by Latvia , and to the east by Lake Peipsi and the Russian Federation . Across the Baltic Sea lies...
and besieged its capital Kolyvan
Tallinn
Tallinn is the capital and largest city of Estonia. It occupies an area of with a population of 414,940. It is situated on the northern coast of the country, on the banks of the Gulf of Finland, south of Helsinki, east of Stockholm and west of Saint Petersburg. Tallinn's Old Town is in the list...
. Four years later, he devastated Finland
Finnish-Novgorodian wars
The Finnish–Novgorodian wars were a series of conflicts that took place between Finnic tribes in eastern Fennoscandia called "Yem", and the Republic of Novgorod from the 11th or 12th century to early 13th century. The wars seem to have contributed to the eventual Swedish conquest of Finland in...
and baptised Karelia
Karelia
Karelia , the land of the Karelian peoples, is an area in Northern Europe of historical significance for Finland, Russia, and Sweden...
. His next ambition was to subjugate Pskov
Pskov
Pskov is an ancient city and the administrative center of Pskov Oblast, Russia, located in the northwest of Russia about east from the Estonian border, on the Velikaya River. Population: -Early history:...
, but the Novgorodians refused to make war against its neighbour. Yaroslav departed in anger and seized the Novgorodian enclave of Volokolamsk
Volokolamsk
Volokolamsk is a town and the administrative center of Volokolamsky District of Moscow Oblast, Russia, located on the Gorodenka River, not far from its confluence with the Lama River, northwest of Moscow. Population: -History:...
. In 1234, he returned to Novgorod and several years later defeated its chief enemies—Lithuania
Lithuania
Lithuania , officially the Republic of Lithuania is a country in Northern Europe, the biggest of the three Baltic states. It is situated along the southeastern shore of the Baltic Sea, whereby to the west lie Sweden and Denmark...
ns and Teutonic Knights. In 1236, he followed Danylo of Halych's advice and moved from Novgorod to Kiev
Kiev
Kiev or Kyiv is the capital and the largest city of Ukraine, located in the north central part of the country on the Dnieper River. The population as of the 2001 census was 2,611,300. However, higher numbers have been cited in the press....
, leaving his son Alexander
Alexander Nevsky
Alexander Nevsky was the Prince of Novgorod and Grand Prince of Vladimir during some of the most trying times in the city's history. Commonly regarded as the key figure of medieval Rus, Alexander was the grandson of Vsevolod the Big Nest and rose to legendary status on account of his military...
as his representative in the north.

In 1238, when the Mongols
Mongols
Mongols ) are a Central-East Asian ethnic group that lives mainly in the countries of Mongolia, China, and Russia. In China, ethnic Mongols can be found mainly in the central north region of China such as Inner Mongolia...
first invaded Kyiv Rus and his elder brother Yuri was killed in battle, Yaroslav left Kiev for Vladimir, where he was crowned grand prince. Yaroslav attempted to restore the cities of Vladimir-Suzdal
Vladimir-Suzdal
The Vladimir-Suzdal Principality or Vladimir-Suzdal Rus’ was one of the major principalities which succeeded Kievan Rus' in the late 12th century and lasted until the late 14th century. For a long time the Principality was a vassal of the Mongolian Golden Horde...
after the Mongol ravages and fires. In 1243, he was summoned by Batu Khan
Batu Khan
Batu Khan was a Mongol ruler and founder of the Ulus of Jochi , the sub-khanate of the Mongol Empire. Batu was a son of Jochi and grandson of Genghis Khan. His ulus was the chief state of the Golden Horde , which ruled Rus and the Caucasus for around 250 years, after also destroying the armies...
to his capital Sarai
Sarai (city)
Sarai was the name of two cities, which were successively capital cities of the Golden Horde, the Mongol kingdom which ruled Russia and much of central Asia in the 13th and 14th centuries...
. After a lengthy conference, he returned to Vladimir with honours. Two years later, he was again summoned to the east, this time by Güyük Khan
Güyük Khan
Güyük was the third Great Khan of the Mongol Empire. As the eldest son of Ögedei Khan and a grandson of Genghis Khan, he reigned from 1246 to 1248...
in Karakorum. There he was poisoned by the Great khan's mother Toregene and died a week after he had been allowed to return home.

Yaroslav married his first wife c. 1205. She was a daughter of Yuri Kondakovich, Khan of the Cumans
Cumans
The Cumans were Turkic nomadic people comprising the western branch of the Cuman-Kipchak confederation. After Mongol invasion , they decided to seek asylum in Hungary, and subsequently to Bulgaria...
. Her people belonged to the Kipchaks
Kipchaks
Kipchaks were a Turkic tribal confederation...
, a confederation of pastoralists and warriors of Turkic origin.

In 1214, Yaroslav married his second wife Rostislava Mstislavna. She was a daughter of Mstislav the Bold
Mstislav the Bold
Mstislav Mstislavich the Bold was one of the most popular and active princes of Kievan Rus' in the decades preceding Mongol invasion of Rus. He was the maternal grandfather of Alexander Nevsky and the prince Leo of Galicia....
and another Cuman princess. Her maternal grandfather was Kotian Khan. They were divorced in 1216.

In 1218, Yaroslav married his third wife Fedosia Igorevna of Ryazan
Ryazan
Ryazan is a city and the administrative center of Ryazan Oblast, Russia. It is located on the Oka River southeast of Moscow. Population: The strategic bomber base Dyagilevo is just west of the city, and the air base of Alexandrovo is to the southeast as is the Ryazan Turlatovo Airport...
. She was a daughter of Igor Glebovich and Agrafena of Kiev
Kiev
Kiev or Kyiv is the capital and the largest city of Ukraine, located in the north central part of the country on the Dnieper River. The population as of the 2001 census was 2,611,300. However, higher numbers have been cited in the press....
. Her father was the second son of Gleb Rostislavich, Prince Prince of Ryazan
Ryazan Principality
The Grand Duchy of Ryazan existed from 1078 when it was separated from the Chernigov Principality as the provincial Murom Principality.-Prior to the invasion of Batu Khan:...
(d. 1178) and Euphrosyne of Pereyaslavl
Pereyaslavl
Pereyaslavl can refer to:* Pereslavl-Zalessky - a town in the Yaroslavl Oblast in Russia * Pereyaslavl Ryazansky - renamed Ryazan in 1778...
. Her mother was a daughter of Rostislav I of Kiev
Rostislav I of Kiev
Rostislav Mstislavich , Kniaz' of Smolensk , Novgorod and Velikiy Kniaz of Kiev . He was the son of Mstislav I of Kiev and Christina Ingesdotter of Sweden....
. They had at least twelve children: