Encyclopedia
Maria Shvarnovna was the first wife of Vsevolod III "Big Nest", and gave birth to twelve children (hence Vsevolod's sobriquet of "Big Nest".) Four of her sons, Konstantin
Konstantin of Rostov
Konstantin Vsevolodovich was the eldest son of Vsevolod the Big Nest and Maria Shvarnovna.In 1206 and 1207, he was the prince of Novgorod. In 1207, his father sent him to rule the towns of Rostov and Yaroslavl...
, George
Yuri II
Yuri II , also known as George II of Vladimir or Georgy II Vsevolodovich , was the fourth Grand Prince of Vladimir who presided over Vladimir-Suzdal at the time of the Mongol invasion of Russia.He was the third and best-loved son of Vsevolod III and Maria Shvarnovna.He first...
, Yaroslav and Sviatoslav
Sviatoslav Vsevolodovich of Vladimir
Sviatoslav Vsevolodovich of Vladimir was the Prince of Novgorod and Grand Prince of Vladimir-Suzdal ....
, succeeded their father as Grand Prince
Grand Prince
The title grand prince or great prince ranked in honour below emperor and tsar and above a sovereign prince .Grand duke is the usual and established, though not literal, translation of these terms in English and Romance languages, which do not normally use separate words for a "prince" who reigns...
s of Vladimir
Vladimir
Vladimir is a city and the administrative center of Vladimir Oblast, Russia, located on the Klyazma River, to the east of Moscow along the M7 motorway. Population:...
, and Yaroslav went on to become Grand Prince of Kiev
Kiev
Kiev or Kyiv is the capital and the largest city of Ukraine, located in the north central part of the country on the Dnieper River. The population as of the 2001 census was 2,611,300. However, higher numbers have been cited in the press....
around the time of the Mongol Invasion
Mongol invasion of Rus
The Mongol invasion of Russia was resumed on 21 December 1237 marking the resumption of the Mongol invasion of Europe, during which the Mongols attacked the medieval powers of Poland, Kiev, Hungary, and miscellaneous tribes of less organized peoples...
. As Yaroslav's
Yaroslav Vsevolodovich
Yaroslav Vsevolodovich may refer to the following Russian princes:*Yaroslav II of Russia, Grand Prince of Vladimir*Yaroslav II Vsevolodovich , prince of Chernigov...
mother, she is thus the paternal grandmother of Alexander Nevskii, whose son, Daniel of Moscow
Daniel of Moscow
Daniil Aleksandrovich was the youngest son of Alexander Nevsky and forefather of all the Grand Princes of Moscow....
, founded the Muscovite branch of the Rurikid Dynasty.

Maria's origins are disputed. Some sources say she was Ossetian
Ossetian
Ossetian may refer to:* The Ossetian language* A member of the Ossetian people* A person from the region of Ossetia...
or Alan
Alans
The Alans, or the Alani, occasionally termed Alauni or Halani, were a group of Sarmatian tribes, nomadic pastoralists of the 1st millennium AD who spoke an Eastern Iranian language which derived from Scytho-Sarmatian and which in turn evolved into modern Ossetian.-Name:The various forms of Alan —...
and connected to the Georgia
Georgia (country)
Georgia is a sovereign state in the Caucasus region of Eurasia. Located at the crossroads of Western Asia and Eastern Europe, it is bounded to the west by the Black Sea, to the north by Russia, to the southwest by Turkey, to the south by Armenia, and to the southeast by Azerbaijan. The capital of...
n royal house, while others, such as the Uspensky Sbornik (a thirteenth century text now housed in the Russian State Museum in Moscow), say she was Moravia
Moravia
Moravia is a historical region in Central Europe in the east of the Czech Republic, and one of the former Czech lands, together with Bohemia and Silesia. It takes its name from the Morava River which rises in the northwest of the region...
n. M. V. Shchepkina posited the idea that the Sbornik was compiled for Maria in 1199-1206, and thus the claims that she was Moravian might be more believable than the other claims, but Caucasian chronicles claim Vsevolod traveled to Tbilisi
Tbilisi
Tbilisi is the capital and the largest city of Georgia, lying on the banks of the Mt'k'vari River. The name is derived from an early Georgian form T'pilisi and it was officially known as Tiflis until 1936...
in 1170 (from Constantinople
Constantinople
Constantinople was the capital of the Roman, Eastern Roman, Byzantine, Latin, and Ottoman Empires. Throughout most of the Middle Ages, Constantinople was Europe's largest and wealthiest city.-Names:...
), where he was married to Maria at the suggestion of the Georgian King. The date of her death is also uncertain, as March 19, 1205 is also given in some accounts. The Novgorod First Chronicle
Novgorod First Chronicle
The Novgorod First Chronicle or The Chronicle of Novgorod, 1016-1471 is the most ancient extant chronicle of the Novgorod Republic. It reflects a tradition different from the Kievan Primary Chronicle...
mentions her death under the year 1205, but does not give an exact day. As it is mentioned after her son Konstantin's arrival in Novgorod on March 20, it would seem she died after that, perhaps in May. 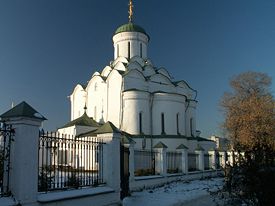 Maria is venerated as a saint by the Russian Orthodox Church
Russian Orthodox Church
The Russian Orthodox Church or, alternatively, the Moscow Patriarchate The ROC is often said to be the largest of the Eastern Orthodox churches in the world; including all the autocephalous churches under its umbrella, its adherents number over 150 million worldwide—about half of the 300 million...
and is credited with founding several convents, most notably the Convent of the Assumption, known as the Princess's Convent (Княгинин монастырь) in Vladimir on the Kliazma
Vladimir
Vladimir is a city and the administrative center of Vladimir Oblast, Russia, located on the Klyazma River, to the east of Moscow along the M7 motorway. Population:...
. According to several accounts, the convent was founded in 1200 and Maria took the schema and the name Marfa (although this would have required her to have ended her marriage with Vsevolod, who outlived her by six years). She and her sister, Anna, were buried in the convent and her relics, along with those of several other saints, including Aleksandr Nevskii's first wife, Princess Alexandra, and his daughter are still kept there.

Maria and Vsevolod the Big Nest had at least fourteen children: