Galich is a town in Kostroma Oblast
Kostroma Oblast
Kostroma Oblast is a federal subject of Russia . Its administrative center is the city of Kostroma.Major historic towns include Kostroma, Sharya, Nerekhta, Galich, Soligalich, and Makaryev. Textile industries have been developed there since the early 18th century...
, Russia
Russia
Russia or , officially known as both Russia and the Russian Federation , is a country in northern Eurasia. It is a federal semi-presidential republic, comprising 83 federal subjects...
, situated on the southern bank of Lake Galichskoye
Lake Galichskoye
Lake Galichskoye is a freshwater lake in the northern part of Kostroma Oblast, Russia that takes its name from the old town of Galich sitting on its south bank. It is situated at the height of 100 meters above mean sea level, stretching for 17 km from west to east. The lake area is 75.4 km2. The...
. It is also a minor railroad node of the Trans-Siberian railway
Trans-Siberian Railway
The Trans-Siberian Railway is a network of railways connecting Moscow with the Russian Far East and the Sea of Japan. It is the longest railway in the world...
. Population: 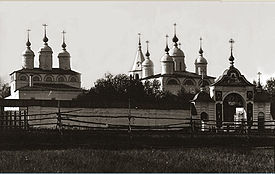 The town was first chronicled in 1234 as Grad Mersky (i.e., the Town of the Merya). It gradually developed into one of the greatest salt
Salt
In chemistry, salts are ionic compounds that result from the neutralization reaction of an acid and a base. They are composed of cations and anions so that the product is electrically neutral...
-mining centres of Eastern Europe, eclipsing the Southern town of Halych
Halych
Halych is a historic city on the Dniester River in western Ukraine. The town gave its name to the historic province and kingdom of Kingdom of Galicia–Volhynia, of which it was the capital until the early 14th century, when the seat of the local princes was moved to Lviv...
, from which it takes its name. In the 13th century, the town was ruled by a younger brother of Alexander Nevsky
Alexander Nevsky
Alexander Nevsky was the Prince of Novgorod and Grand Prince of Vladimir during some of the most trying times in the city's history. Commonly regarded as the key figure of medieval Rus, Alexander was the grandson of Vsevolod the Big Nest and rose to legendary status on account of his military...
and remained in his line until 1363, when the Muscovites seized the principality and ousted the ruling family to Novgorod.

The 15th and 16th centuries are justly considered the golden age of Galich. At that time the town controlled most of the Russian trade
Trade
Trade is the transfer of ownership of goods and services from one person or entity to another. Trade is sometimes loosely called commerce or financial transaction or barter. A network that allows trade is called a market. The original form of trade was barter, the direct exchange of goods and...
in salt and fur
Fur
Fur is a synonym for hair, used more in reference to non-human animals, usually mammals; particularly those with extensives body hair coverage. The term is sometimes used to refer to the body hair of an animal as a complete coat, also known as the "pelage". Fur is also used to refer to animal...
s. Dmitry Shemyaka
Dmitry Shemyaka
Dmitriy Yurievich Shemyaka was the second son of Yury of Zvenigorod by Anastasia of Smolensk and grandson of Dmitri Donskoi. His hereditary patrimony was the rich Northern town Galich-Mersky...
and other local princes pressed their claims to the Muscovite crown, and three of them actually took possession of the Kremlin
Moscow Kremlin
The Moscow Kremlin , sometimes referred to as simply The Kremlin, is a historic fortified complex at the heart of Moscow, overlooking the Moskva River , Saint Basil's Cathedral and Red Square and the Alexander Garden...
in the course of the Great Feudal War.

The early medieval earthen rampart
Defensive wall
A defensive wall is a fortification used to protect a city or settlement from potential aggressors. In ancient to modern times, they were used to enclose settlements...
s were further fortified in the early 15th and 16th centuries and have since been known as Shemyaka Hills. The Poles burnt it to the ground in 1612, Peter the Great had a wooden kremlin
Kremlin
A kremlin , same root as in kremen is a major fortified central complex found in historic Russian cities. This word is often used to refer to the best-known one, the Moscow Kremlin, or metonymically to the government that is based there...
demolished, and the town further declined with the transfer of Russian foreign trade from Arkhangelsk
Arkhangelsk
Arkhangelsk , formerly known as Archangel in English, is a city and the administrative center of Arkhangelsk Oblast, Russia. It lies on both banks of the Northern Dvina River near its exit into the White Sea in the north of European Russia. The city spreads for over along the banks of the river...
to St. Petersburg
Saint Petersburg
Saint Petersburg is a city and a federal subject of Russia located on the Neva River at the head of the Gulf of Finland on the Baltic Sea...
.

The Galich Mobile Crane Plant manufactures some 20% of Russia's entire mobile crane
Crane (machine)
A crane is a type of machine, generally equipped with a hoist, wire ropes or chains, and sheaves, that can be used both to lift and lower materials and to move them horizontally. It uses one or more simple machines to create mechanical advantage and thus move loads beyond the normal capability of...
production.

City's industries also manufacture steel barrels, shoes, and clothing. There is a timber mill in town as well.

Historic monuments of Galich include various buildings from the imperial period of Russian history. Particularly noteworthy is the Paisiev Monastery, founded in the early 14th century and featuring a 16th-century five-domed cathedral
Cathedral
A cathedral is a Christian church that contains the seat of a bishop...
and a three-domed church from 1642.

The patron saint
Patron saint
A patron saint is a saint who is regarded as the intercessor and advocate in heaven of a nation, place, craft, activity, class, clan, family, or person...
s of Galich are Venerable
Venerable
The Venerable is used as a style or epithet in several Christian churches. It is also the common English-language translation of a number of Buddhist titles.-Roman Catholic:...
Jacob of Galich, Venerable Jacob of Zhelezny Borok (Yakov Zheleznoborovsky), Venerable Macarius of Unzha
Macarius of Unzha
Venerable Macarius of the Yellow Water Lake and the Unzha, the Miracle Worker is a Saint of Russian Orthodox Church.He is credited with the founding of four monasteries in the Middle and Upper Volga regions of Russia....
, Venerable Paisius of Galich,
St. Philip the Metropolitan of Moscow
Metropolitan Philip
Saint Philip II of Moscow was a Russian Orthodox monk, who became Metropolitan of Moscow during the reign of Ivan the Terrible. He was one of a few Metropolitans who dared openly to contradict royal authority, and it is widely believed that the Tsar had him murdered on that account...
,
Venerable Gregory of Vologda, Venerable Cyril of Novo-Ozero,
St. Jonah Metropolitan of Moscow, Venerable Abraham of Gorodets, Holy Martyr
Martyr
A martyr is somebody who suffers persecution and death for refusing to renounce, or accept, a belief or cause, usually religious.-Meaning:...

Since 2004, Galich hosts the annual short film festival
Film festival
A film festival is an organised, extended presentation of films in one or more movie theaters or screening venues, usually in a single locality. More and more often film festivals show part of their films to the public by adding outdoor movie screenings...
"Russia's Family" , whose stated goals are "to aid spiritual and moral healing of Russian society and to promote traditional
family values
Family values
Family values are political and social beliefs that hold the nuclear family to be the essential ethical and moral unit of society. Familialism is the ideology that promotes the family and its values as an institution....
".