Encyclopedia
Yuri II also known as George II of Vladimir or Georgy II Vsevolodovich (November 26, 1188March 4, 1238), was the fourth Grand Prince
Grand Prince
The title grand prince or great prince ranked in honour below emperor and tsar and above a sovereign prince .Grand duke is the usual and established, though not literal, translation of these terms in English and Romance languages, which do not normally use separate words for a "prince" who reigns...
of Vladimir
Vladimir
Vladimir is a city and the administrative center of Vladimir Oblast, Russia, located on the Klyazma River, to the east of Moscow along the M7 motorway. Population:...
(1212–1216, 1218–1238) who presided over Vladimir-Suzdal
Vladimir-Suzdal
The Vladimir-Suzdal Principality or Vladimir-Suzdal Rus’ was one of the major principalities which succeeded Kievan Rus' in the late 12th century and lasted until the late 14th century. For a long time the Principality was a vassal of the Mongolian Golden Horde...
at the time of the Mongol invasion of Russia.

He first distinguished himself in the battles against Ryazan
Ryazan
Ryazan is a city and the administrative center of Ryazan Oblast, Russia. It is located on the Oka River southeast of Moscow. Population: The strategic bomber base Dyagilevo is just west of the city, and the air base of Alexandrovo is to the southeast as is the Ryazan Turlatovo Airport...
in 1208. His father wanted Yuri to inherit Rostov
Rostov
Rostov is a town in Yaroslavl Oblast, Russia, one of the oldest in the country and a tourist center of the Golden Ring. It is located on the shores of Lake Nero, northeast of Moscow. Population:...
and his elder brother Konstantin
Konstantin of Rostov
Konstantin Vsevolodovich was the eldest son of Vsevolod the Big Nest and Maria Shvarnovna.In 1206 and 1207, he was the prince of Novgorod. In 1207, his father sent him to rule the towns of Rostov and Yaroslavl...
to succeed him in Vladimir. The latter, however, declared that he would rule both towns or nothing at all. Thereupon Vsevolod disinherited Konstantin and passed the throne to Yuri. 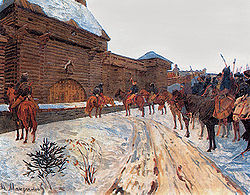 After Vsevolod's death, Konstantin allied himself with Mstislav the Bold
Mstislav the Bold
Mstislav Mstislavich the Bold was one of the most popular and active princes of Kievan Rus' in the decades preceding Mongol invasion of Rus. He was the maternal grandfather of Alexander Nevsky and the prince Leo of Galicia....
and defeated Yuri and his other brothers on the Lipitsa River
Battle of Lipitsa
The Battle of Lipitsa was the decisive battle in the succession struggle over the Grand Princely throne of Vladimir-Suzdal following the death of Vsevolod the Big Nest. In the battle, fought on April 22, 1216, the forces of Mstislav the Daring and Konstantin Vsevolodovich defeated those of...
. Having gained Vladimir, Konstantin sent Yuri to rule Rostov and Yaroslavl
Yaroslavl
Yaroslavl is a city and the administrative center of Yaroslavl Oblast, Russia, located northeast of Moscow. The historical part of the city, a World Heritage Site, is located at the confluence of the Volga and the Kotorosl Rivers. It is one of the Golden Ring cities, a group of historic cities...
. Two years later Konstantin died, and Yuri was allowed to return to Vladimir.

During his reign in Vladimir, Yuri waged several wars against Volga Bulgaria
Volga Bulgaria
Volga Bulgaria, or Volga–Kama Bolghar, is a historic Bulgar state that existed between the seventh and thirteenth centuries around the confluence of the Volga and Kama rivers in what is now Russia.-Origin:...
and founded the fortress of Nizhny Novgorod
Nizhny Novgorod
Nizhny Novgorod , colloquially shortened to Nizhny, is, with the population of 1,250,615, the fifth largest city in Russia, ranking after Moscow, St. Petersburg, Novosibirsk, and Yekaterinburg...
on the Volga River
Volga River
The Volga is the largest river in Europe in terms of length, discharge, and watershed. It flows through central Russia, and is widely viewed as the national river of Russia. Out of the twenty largest cities of Russia, eleven, including the capital Moscow, are situated in the Volga's drainage...
to secure the area from Bulgarian attacks. He installed his younger brother Yaroslav in Novgorod. When the Mongols first approached Russia in 1223, he sent a small unit against them, but it arrived too late to take part in the disastrous Battle of the Kalka River
Battle of the Kalka River
The Battle of the Kalka River took place on May 31, 1223, between the Mongol Empire and Kiev, Galich, and several other Rus' principalities and the Cumans, under the command of Mstislav the Bold and Mstislav III of Kiev...
.

When the Mongols returned in 1237, Yuri treated their envoys with disdain. Likewise, he did not help Ryazan when Batu Khan
Batu Khan
Batu Khan was a Mongol ruler and founder of the Ulus of Jochi , the sub-khanate of the Mongol Empire. Batu was a son of Jochi and grandson of Genghis Khan. His ulus was the chief state of the Golden Horde , which ruled Rus and the Caucasus for around 250 years, after also destroying the armies...
laid siege to that city. His own capital, however, was the next in line. Yuri's sons were soundly defeated near Kolomna
Kolomna
Kolomna is an ancient city and the administrative center of Kolomensky District of Moscow Oblast, Russia, situated at the confluence of the Moskva and Oka Rivers, southeast of Moscow. The area of the city is about . The city was founded in 1177...
, and Yuri himself could barely escape to Yaroslavl. His wife Agatha (Mikhail of Kiev's sister) and all his family died in Vladimir when a church where they had sought refuge from the fire collapsed.

Memorsky Alexander. (1889) The founder of Nizhny Novgorod, Grand Duke Georgy (Yury) II Vsevolodovich (Основатель Нижнего Новгорода Великий князь Георгий (Юрий) II Всеволодович) at Runivers.ru in DjVu
DjVu
DjVu is a computer file format designed primarily to store scanned documents, especially those containing a combination of text, line drawings, and photographs. It uses technologies such as image layer separation of text and background/images, progressive loading, arithmetic coding, and lossy...
and PDF formats
The source of this article is wikipedia, the free encyclopedia.  The text of this article is licensed under the GFDL.