Encyclopedia
Yambol is a city in southeastern Bulgaria
Bulgaria
Bulgaria , officially the Republic of Bulgaria , is a parliamentary democracy within a unitary constitutional republic in Southeast Europe. The country borders Romania to the north, Serbia and Macedonia to the west, Greece and Turkey to the south, as well as the Black Sea to the east...
, an administrative centre of Yambol Province
Yambol Province
Yambol is a province in southeastern Bulgaria, neighbouring Turkey to the south. It is named after its main city Yambol, while other towns include Straldzha, Bolyarovo and Elhovo...
. It lies on both banks of the Tundzha
Tundzha
The Tundzha is a river in Bulgaria and Turkey and the most significant tributary of the Maritsa, emptying into it on Turkish territory near Edirne....
river in the historical region of Thrace
Thrace
Thrace is a historical and geographic area in southeast Europe. As a geographical concept, Thrace designates a region bounded by the Balkan Mountains on the north, Rhodope Mountains and the Aegean Sea on the south, and by the Black Sea and the Sea of Marmara on the east...
. As of February 2011, the town has a population of 72,843 inhabitants. It is occasionally spelt 'Jambol'. 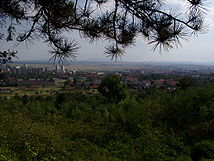 The surrounding area has been inhabited since the Neolithic
Neolithic
The Neolithic Age, Era, or Period, or New Stone Age, was a period in the development of human technology, beginning about 9500 BC in some parts of the Middle East, and later in other parts of the world. It is traditionally considered as the last part of the Stone Age...
and was the location of the ancient Thracian
Thracians
The ancient Thracians were a group of Indo-European tribes inhabiting areas including Thrace in Southeastern Europe. They spoke the Thracian language – a scarcely attested branch of the Indo-European language family...
royal city of Kabyle. It was founded or refounded by Philip II of Macedon
Philip II of Macedon
Philip II of Macedon "friend" + ἵππος "horse" — transliterated ; 382 – 336 BC), was a king of Macedon from 359 BC until his assassination in 336 BC. He was the father of Alexander the Great and Philip III.-Biography:...
as an Ancient Greek polis. Conquered by the Romans
Ancient Rome
Ancient Rome was a thriving civilization that grew on the Italian Peninsula as early as the 8th century BC. Located along the Mediterranean Sea and centered on the city of Rome, it expanded to one of the largest empires in the ancient world....
, but destroyed by the Avars
Eurasian Avars
The Eurasian Avars or Ancient Avars were a highly organized nomadic confederacy of mixed origins. They were ruled by a khagan, who was surrounded by a tight-knit entourage of nomad warriors, an organization characteristic of Turko-Mongol groups...
in 583). Yambol was founded by Roman Emperor
Roman Emperor
The Roman emperor was the ruler of the Roman State during the imperial period . The Romans had no single term for the office although at any given time, a given title was associated with the emperor...
Diocletian
Diocletian
Diocletian |latinized]] upon his accession to Diocletian . c. 22 December 244  – 3 December 311), was a Roman Emperor from 284 to 305....
in AD 293; though it was named Diospolis (Διόςπόλις in Greek
Greek language
Greek is an independent branch of the Indo-European family of languages. Native to the southern Balkans, it has the longest documented history of any Indo-European language, spanning 34 centuries of written records. Its writing system has been the Greek alphabet for the majority of its history;...
'city of Zeus
Zeus
In the ancient Greek religion, Zeus was the "Father of Gods and men" who ruled the Olympians of Mount Olympus as a father ruled the family. He was the god of sky and thunder in Greek mythology. His Roman counterpart is Jupiter and his Etruscan counterpart is Tinia.Zeus was the child of Cronus...
'), the name also reflected the emperor's name. The name later evolved through Diampolis (Διάμπόλις), Hiambouli (Ηιάμβόυλι; in Byzantine chronicles), Dinibouli (دنبلي; Arabic chronicles), Dbilin (Дбилин; in Bulgarian inscriptions), and Diamboli (Диамбоюли) to become Yambol. As the Slavs and Bulgars
Bulgars
The Bulgars were a semi-nomadic who flourished in the Pontic Steppe and the Volga basin in the 7th century.The Bulgars emerge after the collapse of the Hunnic Empire in the 5th century....
arrived in the Balkans
Balkans
The Balkans is a geopolitical and cultural region of southeastern Europe...
in the Middle Ages
Middle Ages
The Middle Ages is a periodization of European history from the 5th century to the 15th century. The Middle Ages follows the fall of the Western Roman Empire in 476 and precedes the Early Modern Era. It is the middle period of a three-period division of Western history: Classic, Medieval and Modern...
, the fortress was contested by the Bulgarian Empire
Bulgarian Empire
Bulgarian Empire is a term used to describe two periods in the medieval history of Bulgaria, during which it acted as a key regional power in Europe in general and in Southeastern Europe in particular, rivalling Byzantium...
and the Eastern Roman Empire. It has been an important Bulgarian center ever since
Bulgaria
Bulgaria , officially the Republic of Bulgaria , is a parliamentary democracy within a unitary constitutional republic in Southeast Europe. The country borders Romania to the north, Serbia and Macedonia to the west, Greece and Turkey to the south, as well as the Black Sea to the east...
.

The predominant religion is Orthodox Christianity with a number of churches being present (among them one of the Holy Trinity, one of St George; the largest one is the cathedral of St Nicholas) consecrated in 1888; there also exist Eastern Rite Catholic and Protestant religious buildings. During the Ottoman period the town had a very large Muslim population as well.

The city was affected by the turmoils of the early 20th century. Its Greek population (around 20 families) left during the exchange of populations between Bulgaria and Greece and it received in return Bulgarians from Greece. It also hosted Bulgarian Macedonian refugees from the failed 1903 Ilinden Uprising. During World War I
World War I
World War I , which was predominantly called the World War or the Great War from its occurrence until 1939, and the First World War or World War I thereafter, was a major war centred in Europe that began on 28 July 1914 and lasted until 11 November 1918...
, Yambol hosted a base for Luftstreitkräfte
Luftstreitkräfte
The Deutsche Luftstreitkräfte , known before October 1916 as Die Fliegertruppen des deutschen Kaiserreiches , or simply Die Fliegertruppen, was the air arm of the Imperial German Army during World War I...
(Imperial German
German Empire
The German Empire refers to Germany during the "Second Reich" period from the unification of Germany and proclamation of Wilhelm I as German Emperor on 18 January 1871, to 1918, when it became a federal republic after defeat in World War I and the abdication of the Emperor, Wilhelm II.The German...
Army Air Service) zeppelin
Zeppelin
A Zeppelin is a type of rigid airship pioneered by the German Count Ferdinand von Zeppelin in the early 20th century. It was based on designs he had outlined in 1874 and detailed in 1893. His plans were reviewed by committee in 1894 and patented in the United States on 14 March 1899...
s used for missions in Romania
Romania
Romania is a country located at the crossroads of Central and Southeastern Europe, on the Lower Danube, within and outside the Carpathian arch, bordering on the Black Sea...
, Russia
Russia
Russia or , officially known as both Russia and the Russian Federation , is a country in northern Eurasia. It is a federal semi-presidential republic, comprising 83 federal subjects...
, Sudan
Sudan
Sudan , officially the Republic of the Sudan , is a country in North Africa, sometimes considered part of the Middle East politically. It is bordered by Egypt to the north, the Red Sea to the northeast, Eritrea and Ethiopia to the east, South Sudan to the south, the Central African Republic to the...
and Malta
Malta
Malta , officially known as the Republic of Malta , is a Southern European country consisting of an archipelago situated in the centre of the Mediterranean, south of Sicily, east of Tunisia and north of Libya, with Gibraltar to the west and Alexandria to the east.Malta covers just over in...
. The town was chosen by the Germans due to its favorable location and weather conditions.http://bezmer.info/Bezmer_guide_for_US%20military.pdf

In the early 21st century, the city became the first one in Bulgaria to use natural gas for domestic purposes.

The population of Yambol during the first decade after the liberation of Bulgaria
Liberation of Bulgaria
In Bulgarian historiography, the term Liberation of Bulgaria is used to denote the events of the Russo-Turkish War of 1877-78 that led to the re-establishment of Bulgarian state with the Treaty of San Stefano of March 3, 1878, after the complete conquest of the Second Bulgarian Empire, which...
exceeded 10,000, being 11,241 in 1887. Since then it started growing decade by decade, mostly because of the migrants from the rural areas and the surrounding smaller towns, reaching its peak in the period 1985-1992 exceeding 90,000. After this time, the population has started decreasing rapidly in consequence of the poor economic situation in the Bulgarian provinces during the 1990s that leaded to a new migration in the direction of the country capital Sofia and abroad.

Târgu-Jiu, Romania
Romania
Romania is a country located at the crossroads of Central and Southeastern Europe, on the Lower Danube, within and outside the Carpathian arch, bordering on the Black Sea...
Villejuif
Villejuif
Villejuif is a commune in the southern suburbs of Paris, France. It is located from the centre of Paris.-Name:The name Villejuif was recorded for the first time in a papal bull of 1119 as Villa Judea, the meaning of which is still debated...
, Paris
Paris
Paris is the capital and largest city in France, situated on the river Seine, in northern France, at the heart of the Île-de-France region...
, France
France
The French Republic , The French Republic , The French Republic , (commonly known as France , is a unitary semi-presidential republic in Western Europe with several overseas territories and islands located on other continents and in the Indian, Pacific, and Atlantic oceans. Metropolitan France...
Sieradz
Sieradz
Sieradz is a town on the Warta river in central Poland with 44,326 inhabitants . It is situated in the Łódź Voivodship , but was previously the eponymous capital of the Sieradz Voivodship , and historically one of the minor duchies in Greater Poland.It is one of the oldest towns in Poland,...
, Poland
Poland
Poland , officially the Republic of Poland , is a country in Central Europe bordered by Germany to the west; the Czech Republic and Slovakia to the south; Ukraine, Belarus and Lithuania to the east; and the Baltic Sea and Kaliningrad Oblast, a Russian exclave, to the north...
(Since May 2002) Izhevsk
Izhevsk
Izhevsk is the capital city of the Udmurt Republic, Russia, situated on the Izh River in the Western Urals. Population: From 1984 to 1987 Izhevsk carried the name Ustinov |Minister of Defense of the USSR]], Marshal of the Soviet Union, Dmitry Ustinov). The city is an important industrial center,...
, Russia
Russia
Russia or , officially known as both Russia and the Russian Federation , is a country in northern Eurasia. It is a federal semi-presidential republic, comprising 83 federal subjects...
(Since June 1999) Berdyansk, Ukraine
Ukraine
Ukraine is a country in Eastern Europe. It has an area of 603,628 km², making it the second largest contiguous country on the European continent, after Russia...
(Since June 2003) Edirne
Edirne
Edirne is a city in Eastern Thrace, the northwestern part of Turkey, close to the borders with Greece and Bulgaria. Edirne served as the capital city of the Ottoman Empire from 1365 to 1453, before Constantinople became the empire's new capital. At present, Edirne is the capital of the Edirne...
, Turkey
Turkey
Turkey , known officially as the Republic of Turkey , is a Eurasian country located in Western Asia and in East Thrace in Southeastern Europe...
(Since October 26, 2005)