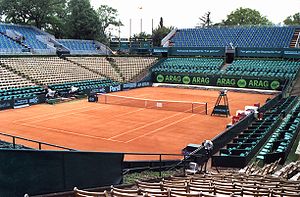 The World Team Cup is the international team championship of the Association of Tennis Professionals
Association of Tennis Professionals
The Association of Tennis Professionals or ATP was formed in 1972 by Donald Dell, Jack Kramer, and Cliff Drysdale to protect the interests of male professional tennis players. Since 1990, the association has organized the worldwide tennis tour for men and linked the title of the tour with the...
(ATP). The tournament has been contested annually since 1978 and is generally considered to be second most prestigious men's team competition in tennis
Tennis
Tennis is a sport usually played between two players or between two teams of two players each . Each player uses a racket that is strung to strike a hollow rubber ball covered with felt over a net into the opponent's court. Tennis is an Olympic sport and is played at all levels of society at all...
after the Davis Cup
Davis Cup
The Davis Cup is the premier international team event in men's tennis. It is run by the International Tennis Federation and is contested between teams of players from competing countries in a knock-out format. The competition began in 1900 as a challenge between Britain and the United States. By...
.

Every year, the eight nations whose top two male players have achieved the highest combined placings in the men's world rankings at the end of the previous year are invited to compete for the cup.

The competition is played on clay court
Clay court
A clay court is one of the four different types of tennis court. Clay courts are made of crushed shale, stone or brick. The red clay is slower than the green, or Har-Tru "American" clay. The French Open uses clay courts, making it unique among the Grand Slam tournaments.Clay courts are more common...
s in Düsseldorf
Düsseldorf
Düsseldorf is the capital city of the German state of North Rhine-Westphalia and centre of the Rhine-Ruhr metropolitan region.Düsseldorf is an important international business and financial centre and renowned for its fashion and trade fairs. Located centrally within the European Megalopolis, the...
, Germany
Germany
Germany , officially the Federal Republic of Germany , is a federal parliamentary republic in Europe. The country consists of 16 states while the capital and largest city is Berlin. Germany covers an area of 357,021 km2 and has a largely temperate seasonal climate...
. The event is generally regarded as the sports highlight of the social scene in the Düsseldorf area. It attracts around 75,000 visitors every year and is televised to over 160 countries.

The event's main sponsor until 2010 was the ARAG Insurance Group
ARAG Group
The ARAG Group is an insurance group. ARAG stands for “Allgemeine Rechtsschutz-Versicherungs-AG.” The headquarters of the ARAG Group are located in the ARAG-Tower in Düsseldorf-Mörsenbroich. The ARAG Group employs nearly 3500 people worldwide. The Group reported premium income and revenues of over...
, and its sponsored name was the "ARAG World Team Cup".