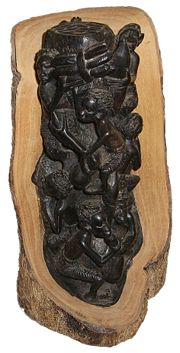 As a contemporary artistic medium, wood
Wood
Wood is a hard, fibrous tissue found in many trees. It has been used for hundreds of thousands of years for both fuel and as a construction material. It is an organic material, a natural composite of cellulose fibers embedded in a matrix of lignin which resists compression...
is used in traditional and modern styles, and is an excellent medium for new art
Art
Art is the product or process of deliberately arranging items in a way that influences and affects one or more of the senses, emotions, and intellect....
. Wood is used in forms of sculpture
Sculpture
Sculpture is three-dimensional artwork created by shaping or combining hard materials—typically stone such as marble—or metal, glass, or wood. Softer materials can also be used, such as clay, textiles, plastics, polymers and softer metals...
, craft, and decoration including chip carving
Chip carving
Chip carving or chip-carving, kerbschnitt in German, is a style of carving in which knives or chisels are used to remove small chips of the material from a flat surface in a single piece. The style became important in Migration Period metalwork, mainly Animal style jewellery, where the faceted...
, wood burning, and marquetry
Marquetry
Marquetry is the art and craft of applying pieces of veneer to a structure to form decorative patterns, designs or pictures. The technique may be applied to case furniture or even seat furniture, to decorative small objects with smooth, veneerable surfaces or to freestanding pictorial panels...
. Wood offers a fascination, beauty, and complexity in the grain, that often shows even when the medium is painted. Wood is used by carpenters to create many useful items such as cabinets, furniture and musical instruments. Artists use wood for sculpture because it is plentiful and inexpensive when compared to other media like stone or bronze. It is in some ways easier to shape than harder substances, but an artist must develop specific skills to carve it properly. Wood does not last as long as other sculpting media because it can be affected by water rot, dry rot, insect invasion and fire. 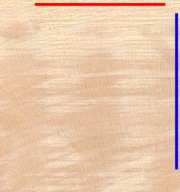 A person who begins woodcarving is challenged to learn to work with the fiber and grain. Hardness and fragility vary with the species of wood. In general, wood tends to break in the "split direction", the direction in which the fibers separate. In the composition of work, one must work with and around this. Each direction of cut feels and works differently. Sharp tools are essential in allowing the artist's sense to shape the material.

Seasoned wood never completely stabilizes, but continues to swell and shrink with seasonal humidity and temperature variations. Any design concept using wood must allow for the particulars of this dimensional variation. Warped wood may be described as bent, twisted, or cupped, or some combination of those modes.

Here are just a few commonly used hardwood
Hardwood
Hardwood is wood from angiosperm trees . It may also be used for those trees themselves: these are usually broad-leaved; in temperate and boreal latitudes they are mostly deciduous, but in tropics and subtropics mostly evergreen.Hardwood contrasts with softwood...
and softwood
Softwood
The term softwood is used to describe wood from trees that are known as gymnosperms.Conifers are an example. It may also be used to describe trees, which tend to be evergreen, notable exceptions being bald cypress and the larches....
species; many more may be found in List of woods. Each has its own character.

The grain and figure of the wood interact with the shape of the piece to make interesting visual and tactile effects. The surface texture may be manipulated by sanding, scraping, scorching, weathering, or leaving it just as it came from the shaping. Processes such as sanding or rasping have one sort of effect, while cutting (planing, chiseling, gouging, or other carving) leaves the surface with a distinctively clear and fresh appearance, particularly if the tool is well-sharpened. Some finishing processes may leave a corduroy
Corduroy
Corduroy is a textile composed of twisted fibers that, when woven, lie parallel to one another to form the cloth's distinct pattern, a "cord." Modern corduroy is most commonly composed of tufted cords, sometimes exhibiting a channel between the tufts...
effect, where the lines of harder late wood contrast with the often paler, softer, early wood.

Each tool used to shape wood usually leaves a signature, or distinctive set of marks. For example, it is easy to tell a cut made by a bandsaw from that of a circular saw
Circular saw
The circular saw is a machine using a toothed metal cutting disc or blade. The term is also loosely used for the blade itself. The blade is a tool for cutting wood or other materials and may be hand-held or table-mounted. It can also be used to make narrow slots...
. If a smooth surface is desired, then planes
Plane (tool)
A hand plane is a tool for shaping wood. When powered by electricity, the tool may be called a planer. Planes are used to flatten, reduce the thickness of, and impart a smooth surface to a rough piece of lumber or timber. Planing is used to produce horizontal, vertical, or inclined flat surfaces on...
, scrapers
Card scraper
A card scraper is a woodworking shaping and finishing tool. It is used to manually remove small amounts of material and excels in tricky grain areas where hand planes would cause tear out. Card scrapers are most suitable for working with hardwoods, and can be used instead of sandpaper...
, or sandpaper
Sandpaper
Sandpaper, also known as glasspaper, is a heavy paper with abrasive material attached to its surface.Sandpaper is part of the "coated abrasives" family of abrasive products. It is used to remove small amounts of material from surfaces, either to make them smoother , to remove a layer of material...
are useful for "erasing" toolmarks. Sometimes it is more interesting to leave the tool marks showing. Some centuries-old violin
Violin
The violin is a string instrument, usually with four strings tuned in perfect fifths. It is the smallest, highest-pitched member of the violin family of string instruments, which includes the viola and cello....
scrolls, for instance, still carry the tool marks of the master that made them, working rapidly and efficiently.

The texture and appearance of wood grain may be enhanced and preserved by the use of an appropriate coating process, either transparent, such as varnish
Varnish
Varnish is a transparent, hard, protective finish or film primarily used in wood finishing but also for other materials. Varnish is traditionally a combination of a drying oil, a resin, and a thinner or solvent. Varnish finishes are usually glossy but may be designed to produce satin or semi-gloss...
or opaque, like paint
Paint
Paint is any liquid, liquefiable, or mastic composition which after application to a substrate in a thin layer is converted to an opaque solid film. One may also consider the digital mimicry thereof...
. The finish coats may also help seal the surface, reducing the adverse effects of humidity or sunlight. Other pieces may benefit from the use of unsealed, weathered material such as barn wood or driftwood
Driftwood
Driftwood is wood that has been washed onto a shore or beach of a sea or river by the action of winds, tides, waves or man. It is a form of marine debris or tidewrack....
.

Working with wood
Woodworking
Woodworking is the process of building, making or carving something using wood.-History:Along with stone, mud, and animal parts, wood was one of the first materials worked by early humans. Microwear analysis of the Mousterian stone tools used by the Neanderthals show that many were used to work wood...
pertains mainly to "cutting away the material that doesn't look like the object in mind." Saw
Saw
A saw is a tool that uses a hard blade or wire with an abrasive edge to cut through softer materials. The cutting edge of a saw is either a serrated blade or an abrasive...
s, rasp
Rasp
A rasp is a tool used for shaping wood or other material. It consists of a point or the tip, then a long steel bar or the belly, then the heel or bottom, then the tang. The tang is joined to a handle, usually made of plastic or wood. The bar has sharp teeth...
s, chisel
Chisel
A chisel is a tool with a characteristically shaped cutting edge of blade on its end, for carving or cutting a hard material such as wood, stone, or metal. The handle and blade of some types of chisel are made of metal or wood with a sharp edge in it.In use, the chisel is forced into the material...
s, gouges and knives
Whittling
Whittling is the art of carving shapes typically out of raw wood or bone with a knife.Whittling is typically performed with a light, small-bladed knife, usually a pocket knife. Specialised whittling knives are available as well...
are all useful, and must be well sharpened
Sharpening
Sharpening is the process of creating or refining a sharp edge of appropriate shape on a tool or implement designed for cutting. Sharpening is done by grinding away material on the implement with an abrasive substance harder than the material of the implement, followed sometimes by processes to...
to work effectively and safely. Dull tools are actually more dangerous than sharp ones; excessive force used on a dull edge can lead to slips and injury.