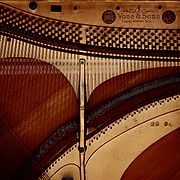 A sound board, or soundboard, is the surface of a string instrument
String instrument
A string instrument is a musical instrument that produces sound by means of vibrating strings. In the Hornbostel-Sachs scheme of musical instrument classification, used in organology, they are called chordophones...
that the strings vibrate against, usually via some sort of bridge
Bridge (instrument)
A bridge is a device for supporting the strings on a stringed instrument and transmitting the vibration of those strings to some other structural component of the instrument in order to transfer the sound to the surrounding air.- Explanation :...
. The resonant properties of the sound board and the interior of the instrument greatly increase loudness
Loudness
Loudness is the quality of a sound that is primarily a psychological correlate of physical strength . More formally, it is defined as "that attribute of auditory sensation in terms of which sounds can be ordered on a scale extending from quiet to loud."Loudness, a subjective measure, is often...
over the string alone.

The sound board operates by the principle of forced vibration; the board is gently vibrated by the string, and despite their differences in size and composition, the board will be "forced" to vibrate at exactly the same frequency, producing the same sound as the string alone, differing only in timbre
Timbre
In music, timbre is the quality of a musical note or sound or tone that distinguishes different types of sound production, such as voices and musical instruments, such as string instruments, wind instruments, and percussion instruments. The physical characteristics of sound that determine the...
. Although the same amount of energy is transmitted with or without the board present, the sound board, due to its greater surface area, is more readily able to transform this energy into sound. In other words, the sound board can move a much greater volume of air, therefore producing a louder sound.

Sound boards are traditionally made of wood (see tonewood
Tonewood
Tonewood generally refers to any wood which may be used in the construction of a musical instrument. Many acoustic properties are often assigned to specific wood species; however the description of these properties is itself a large subject and beyond the scope of this article...
), though other materials can be used, such as skin or plastic on instruments in the banjo
Banjo
In the 1830s Sweeney became the first white man to play the banjo on stage. His version of the instrument replaced the gourd with a drum-like sound box and included four full-length strings alongside a short fifth-string. There is no proof, however, that Sweeney invented either innovation. This new...
family. Wooden sound boards typically have one or more sound hole
Sound hole
A sound hole is an opening in the upper sound board of a stringed musical instrument.The sound holes can have different shapes: round in flat-top guitars, F-holes in instruments from the violin or viol families and in arched-top guitars, rosettes in lutes. Bowed Lyras have D-holes and Mandolins may...
s of various shapes. Round, oval, or F-holes appear on many plucked instruments, such as guitar
Guitar
The guitar is a plucked string instrument, usually played with fingers or a pick. The guitar consists of a body with a rigid neck to which the strings, generally six in number, are attached. Guitars are traditionally constructed of various woods and strung with animal gut or, more recently, with...
s and mandolin
Mandolin
A mandolin is a musical instrument in the lute family . It descends from the mandore, a soprano member of the lute family. The mandolin soundboard comes in many shapes—but generally round or teardrop-shaped, sometimes with scrolls or other projections. A mandolin may have f-holes, or a single...
s. F-holes are usual in violin
Violin
The violin is a string instrument, usually with four strings tuned in perfect fifths. It is the smallest, highest-pitched member of the violin family of string instruments, which includes the viola and cello....
family instruments. Lute
Lute
Lute can refer generally to any plucked string instrument with a neck and a deep round back, or more specifically to an instrument from the family of European lutes....
s commonly have elaborate rosette
Rosette (design)
A rosette is a round, stylized flower design, used extensively in sculptural objects from antiquity. Appearing in Mesopotamia and used to decorate the funeral stele in Ancient Greece...
s. A sound board, depending on the instrument, is also called a top, plate, or belly.

In a grand piano
Piano
The piano is a musical instrument played by means of a keyboard. It is one of the most popular instruments in the world. Widely used in classical and jazz music for solo performances, ensemble use, chamber music and accompaniment, the piano is also very popular as an aid to composing and rehearsal...
, the sound board is a large horizontal plate at the bottom of the case. In an upright piano, the sound board is a large vertical plate at the back of the instrument. The harp
Harp
The harp is a multi-stringed instrument which has the plane of its strings positioned perpendicularly to the soundboard. Organologically, it is in the general category of chordophones and has its own sub category . All harps have a neck, resonator and strings...
has a sound board below the strings.

More generally, any hard surface can act as a sound board. An example is when a tuning fork
Tuning fork
A tuning fork is an acoustic resonator in the form of a two-pronged fork with the prongs formed from a U-shaped bar of elastic metal . It resonates at a specific constant pitch when set vibrating by striking it against a surface or with an object, and emits a pure musical tone after waiting a...
is struck and placed against a table top to amplify its sound.
The source of this article is wikipedia, the free encyclopedia.  The text of this article is licensed under the GFDL.